Home » Beauty and Fashion » Katie Holmes Was Attempting a Different Kind of Sexy With THAT Cashmere Bra, and Honestly, I Can Relate 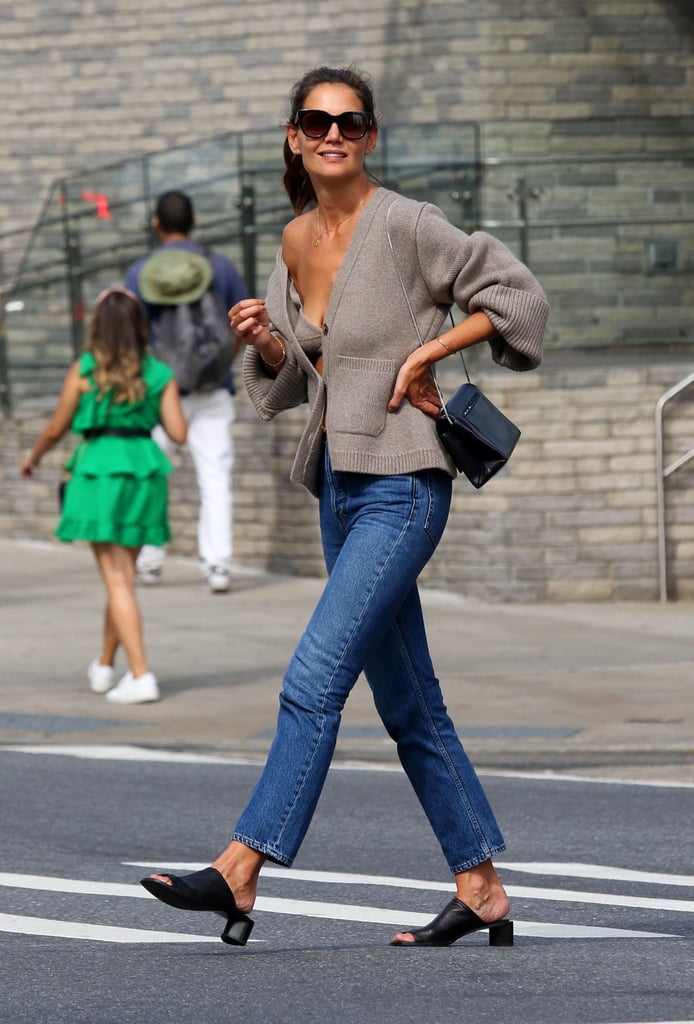 Katie Holmes Was Attempting a Different Kind of Sexy With THAT Cashmere Bra, and Honestly, I Can Relate

Katie Holmes wore a cashmere bralette to hail a cab on a Friday in Manhattan last September, and here we are still talking about it. So why did a pretty dressed-down outfit (by celebrity standards) generate almost as much conversation as Jennifer Lopez’s bedazzled bra at the Super Bowl halftime show? I’ve actually been thinking about this a lot. I mean that really as a matter of fact; it’s occupied a lot of space in my brain as I think about the clothes I want to wear and what I want them to communicate to the world about me. I think Katie was saying something like (and clearly I’m paraphrasing here), “I’m sexy, but comfortable and confident in my own skin, and I don’t have to try to hard.” Basically, “I’m sexy without being too obvious or drawing too much attention.” And, I thought, yeah, that’s my kind of sexy too.

In a new interview for her April cover with InStyle (in which the actress wears countless other covetable outfits, btw), Katie discusses the internet-famous bra ensemble with editor-in-chief Laura Brown, and confirmed as much, saying of the moment that catapulted her to street-style fame:

“Honestly, I wasn’t feeling so sexy. And I saw that and was like, ‘Sexy. I can do that!’ I thought it would be good if I was in a cabin sitting by the fire and wore the [matching] sweater over it. That’s how my brain works. But then I was like, ‘Oh, wait, I’m not in a cabin, and I’m not going to a cabin.’ I still thought I could pull it off, though. I had noticed other people wearing bras with blazers.”

Katie took something seemingly made for a quiet (perhaps, even esoteric fashion fantasy) and made it work in broad daylight in the middle of NYC. That’s why it resonates with so many of us who just flat out love fashion, and find ourselves wondering, how do we make the look work in real life? And maybe it’s not a crystal-covered bodysuit, but a more sensual way to wear our basics, like a cardigan — thrown off the shoulder, of course.

I spent much of my life trying on a kind of “sexy” that just didn’t work for me. I’ve fallen victim to low-rise jeans (with fly barely a millimeter long), seriously slinky crochet bikinis, and curve-flaunting spandex dresses and sky high-heels, but they never had the desired effect, in that I never actually felt confident or cute, and always felt like I was wearing a costume.

As I’ve developed my personal style, I know what trends to say yes and no to. I’ve learned where to draw the line and to embrace the looks that feel more authentically me. So, while “sexy” isn’t a term I’d lead with when I describe my style, like Katie, I like to think I know when it’s a sexy I can do. In this case, I did exactly that — took a page right out of Katie’s playbook and ordered myself my very own bra and matching cardigan (although full disclosure: mine are from Zara). Then, I took it straight to the streets of Manhattan.

Daisy Edgar-Jones Also Can’t Wait to Get Up, Get Dressed, and Dance Again

I’m a traveller & I’m constantly judged – security guards follow me in Tesco, people are rude about my voice & clothes