Another day on the job! Kendall Jenner slayed in this bold blue jacket and crop top combo as she continued shooting a fitness-related campaign.

Kendall Jenner, 25, was back at it for a second day shooting in St. Tropez! The supermodel sizzled once again in a cropped blue lamé bomber jacket along with a high neck black crop top showing off her toned tummy. She also rocked a pair of black short shorts with the ensemble as she ran on a treadmill in the images, taken July 3. While it’s unclear what campaign she’s currently shooting, the brunette looked incredible as she proved just why she’s the top paid model in the world. 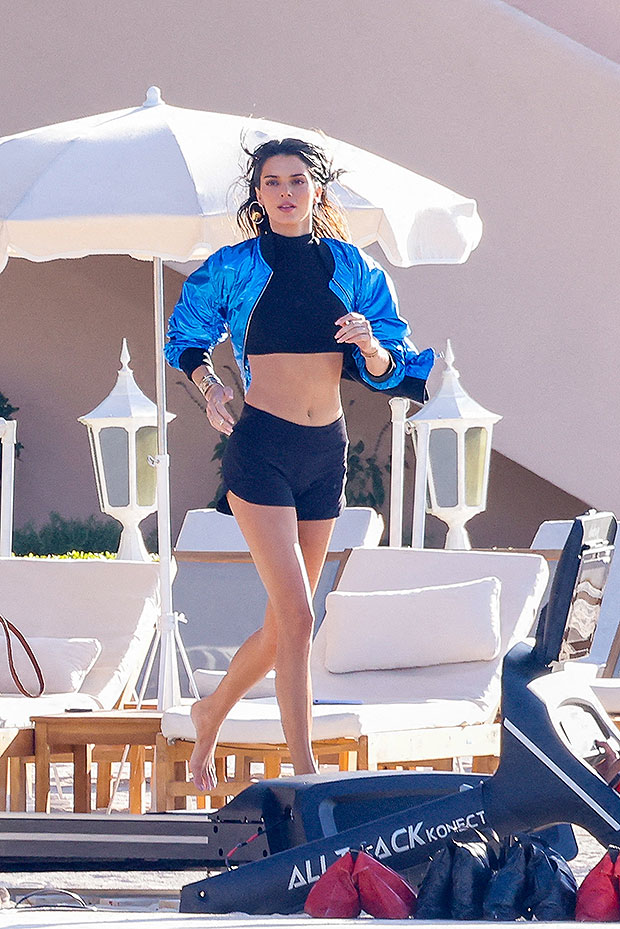 The 818 tequila founder was spotted on the same set a day prior, last time posing in just a black bikini with layered necklaces and earrings. She was spotted hanging out with a white rob over top as she conversed with other staff on set, looking absolutely flawless. Kendall’s picture perfect complexion was glowing as she rocked minimal makeup for the shoot!

With a work ethic just like her brilliant mom (and manager) Kris Jenner, 65, Kendall has no doubt worked hard to get to where she is. The 25-year-old model and entrepreneur reflected on her journey in the fashion world on the recent Keeping Up With The Kardashians reunion with Andy Cohen, saying she “paid her dues” no matter what anyone says. “Everyone around me, whether it’s friends or family, knows how hard I worked and still work,” Kendall said, “I did everything that I was supposed to do and had to do to get to the position that I’m at now as a model.”

As a teen, Kendall — who dreamt of being an Olympic equestrian at the time — got one of her earlier gigs modeling for her brother Brody Jenner‘s ex Avril Lavigne (the Canadian pop-rock star previously had a line called Abbey Dawn).

Kendall went on to explain that she attended as many castings in the Big Apple and elsewhere as possible, but that being on a reality show didn’t exactly help her situation. “I went to every single casting and ran all over not only New York City but all over Europe trying to get a job and make my way,” she added. “I think it’s just a perception that people have, that I just was like, ‘Give it to me!’ and I had it… It definitely was not that…I know it’s kind of corny to say, but [it was] almost like destiny,” she also on the reunion.