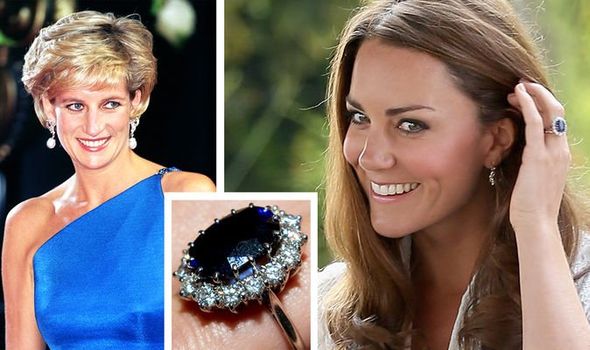 The royals are known for having an impressive collection of jewellery and are no strangers to jewels and sparkles, with their engagement rings no exception. Throughout the decades, the ladies of the Royal Family have been given some incredible rings by their husbands-to-be and each jewel is thought to represent a certain set of characteristics. Nilesh Rakholia, Director at ABELINI Jewellery spoke exclusively to Express.co.uk about the ring Prince William presented Kate Middleton when he got down on one knee during a trip to Kenya in 2010.

The Duke and Duchess of Cambridge announced their engagement to the world on November, 16, 2010.

It is thought the Prince proposed to his girlfriend of nine years while on a trip to Kenya with friends a few weeks earlier in October.

In their first interview after announcing the engagement, the Prince explained he had planned it for a while and carried his mother’s sapphire and diamond engagement ring in his rucksack for three weeks before proposing and was terrified of losing it.

Kate called the moment “very romantic,” before admitting it was a “total shock”.

The couple also admitted they had discussed marriage with each other a lot in the previous year.

The ring Kate was given by William previously belonged to his mother, Princess Diana.

Prince William said at the time of his engagement that giving the ring to Kate was his way of making sure his mother didn’t miss out on his wedding day.

However, when Kate received the ring, it was slightly too big for her reports claim.

She had it resized so it stopped turning around on her finger.

This was done by having small platinum beads placed around the inside of the ring’s band.

Speaking about the ring’s design, Nilesh said: “When Prince Charles proposed to the young Lady Diana Spencer in 1981, Britain was entranced by this fairy-tale romance, and the engagement ring matched the glamour of the young couple.

“Prince William decided to use this truly iconic ring to propose to the Duchess of Cambridge as a special token to his mother.

“With an exquisite oval Garrard 12-carat Ceylon sapphire in the centre, surrounded by 14 solitaire diamonds, all set in white gold, this ring is truly deserving of a future Queen.

“Because of their unique shape, the wearer of an oval-cut ring is thought to be individualistic – not afraid to step outside their comfort zone,” she explained.

“This is true of both Princess Diana and The Duchess of Cambridge, two women who are unafraid to take risks and stand up for worthy causes.

“Sapphires are also thought to represent loyalty and trust, two characteristics essential for a lifelong relationship.”

As for how much Kate’s ring is now worth, at the time of Princess Diana’s engagement in the early 80s, the ring cost £28,000.

Though, others say that given its history, it’s priceless.