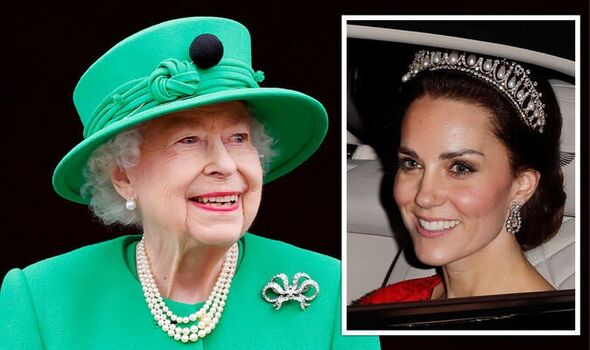 Experts at RH Jewellers talked about Queen Elizabeth’s Four Row Japanese Pearl Choker, one of the late Majesty’s most special pieces of jewellery, and revealed she only loaned the item to two other royals for significant occasions.

The Four Row Japanese Pearl Choker is “a stunning pearl and diamond choker and was a unique piece for Queen Elizabeth II,” the jewellery experts explained.

The necklace featured four rows of pearls with a central diamond clasp in a curved shape.

According to the Crown jewellers Garrard, the Queen ordered this from a set of the “finest cultured pearls presented to her by the Japanese Government”.

Indeed, the late Majesty commissioned the choker herself using pearls from her own collection which were a gift she received from Japan in 1975.

The choker was ready to wear around seven years later and while her first state visit to Japan was in 1975, the choker was first seen around the monarch’s neck in 1982.

The Queen was most famously pictured donning the piece at an engagement in Bangladesh during a royal tour in 1983 and a gala with Margaret Thatcher.

Interestingly, Queen Elizabeth loaned the sentimental piece to two other royals: the late Princess Diana and Catherine, Princess of Wales.

In 1982, Princess Diana wore it for a state banquet at Hampton Court Palace, and she paired it with the Lover’s Knot Tiara.

The Queen also loaned the necklace to Kate, Princess of Wales, in 2017 on the occasion of her 70th wedding anniversary to the late Duke of Edinburgh.

Later that year, Kate donned the jewel again at Prince Philip’s funeral and in September, the piece was once again seen around the Princess of Wales’ neck at Queen Elizabeth’s state funeral.

Although Kate and Princess Diana were the only royals who wore the Queen’s beloved choker, the truth is that the late monarch loaned many pieces of jewellery to other members of the Royal Family.

For instance, Meghan Markle wore the Queen Mary’s diamond bandeau tiara for her wedding, a royal diadem which belonged to the Queen.

The diamond and platinum diadem dates back to 1932 and was completed with a detachable centre broach from 1893.

The tiara also featured a flexible band and was gifted to Queen Elizabeth II by Queen Mary in 1953.

However, because the diadem was on loan, it was not an option for Meghan to keep it.

This is the case for many royals, like Princess Anne and Princess Beatrice who wore the Queen’s wedding tiara at their weddings.

Kate, Princess of Wales also borrowed her wedding tiara, the Cartier Halo, but it is unlikely she will inherit it one day.

According to recent reports, it is believed the diadem will one day be given to her daughter, Princess Charlotte.

The Duchess of Sussex was also gifted a pair of diamond and pearl drop earrings when she and Queen Elizabeth attended their first outing together.

They travelled to Cheshire to open a bridge, visit a theatre and eat lunch and the Queen gifted Meghan the delicate earrings, which she was also seen wearing at the monarch’s state funeral.