Home » Beauty and Fashion » ‘There are so many ways of being beautiful’: Lauren Hutton on ageing naturally

Ask Lauren Hutton her secret to looking so radiant at 76, and she will give you all the good old-fashioned advice about getting plenty of sleep, drinking lots of water and the products she swears by (lately, StriVectin’s cult anti-ageing range). But within 30 seconds, she’s also remembering her time living with hunter-gatherer tribes, and how she’s seen the very defined role of women in those communities, with traits that are common to many of us.

“You need to try to take some time for yourself, be your own good mother – women are always the caretakers,” she says, regaling me with tales like an old friend when I call her in LA. 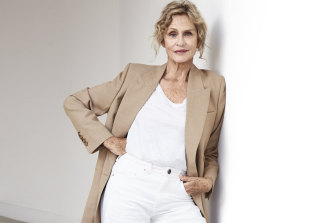 “I’d sign up for another 100 years or so if I could. Most of all, I’d like to be proud of myself again. I’d like to find a way to be useful.”Credit:Alex Cayley/Trunk Archive/Snapper Images

It’s the perfect example of Lauren Hutton as the ultimate supermodel of substance. In 1973, she signed a contract with cosmetics giant Revlon worth $US250,000 a year for 20 days’ work, the largest figure in modelling history at the time. Then, after she was dropped by the beauty brand at 41 (because “women over 40 don’t wear make-up”, according to a vice president at the company), she campaigned for wider use of older models, a fight that it’s fair to conclude she’s won, given that in the past decade she’s appeared on the catwalk for Valentino, Bottega Veneta and Tom Ford.

She’s also had an acting career and started her own make-up brand with the aim of creating products to enhance natural beauty rather than promote Kardashian-esque contouring.

Lauren grew up in South Carolina and Florida, helping to care for her three younger half-sisters when their mother was sick. As a result, she didn’t learn to read until she was given a copy of The Secret Garden at the age of 11.

As she grew up and decided she wanted to travel, she heard that modelling paid a dollar a minute and thought it would be the perfect career to fund her wanderlust. She eventually moved to New York and signed with legendary agent Eileen Ford.

Her off-the-beaten-track adventures (she’d often tell her agent that she was leaving for a fortnight’s holiday and then be gone for months) and spirit of curiosity mean that she’s gained an enlightened perspective on life. Fashion has finally begun to embrace more diverse model casting, but Lauren could always see how beauty came in countless guises.

“It was thought we had one certain look which we were supposed to be,” she says in her fabulous Southern drawl. “But the first thing you really see when you start travelling is that there are beautiful people of every size and shape and colour and age everywhere – in the Far East, the Middle East, South America. There are so many ways of being beautiful.”

With her signature tooth gap and relatively diminutive height (she’s 170 centimetres tall), Lauren wasn’t a typical supermodel, but her carefree manner and unconventional look made her a favourite of some of the biggest photographers of the time. She struck up particularly close relationships with Richard Avedon and Irving Penn. The former once told her, “Lauren, you have the life we’d all like to have.” 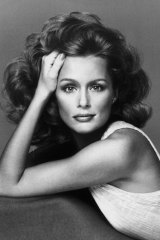 “I got this chill when he said that,” she says wistfully. “It took a long time to sink in, but I never forgot it.”

Her travels informed her work, too. “The first time I was in Paris was with Penn, shooting the Paris collections,” she remembers. “They asked me to put on a real leopard coat. I was twisted up because you can’t refuse – I was only 24. But I’d made my first trip to Africa and knew leopards were disappearing at the speed of light.

“So I told Penn and he decided that we wouldn’t shoot it. Then Diana Vreeland heard about it and soon made it a policy at Vogue that they wouldn’t shoot leopard. Then, much later, she told me she would talked to friends in Washington, and some years later they made a law against it in America.”

Lauren’s latest turn in the fashion spotlight was on the Valentino couture catwalk last July. In an apple-green dress and glitter-lined trench coat (a nod, perhaps, to the relaxed-luxe version she famously wore when she played senator’s wife Michelle Stratton in 1980’s American Gigolo), she was the image of ageless, easy glamour.

Lauren didn’t just walk, she also fell, doing so with characteristic charm. “My boots didn’t quite fit so I was wobbling and when I got just in front of the press place, where they have a hundred photographers and TV cameras, I had to make a turn and boom, I went straight down on my bottom. A man jumped up from the audience and the wonderful model Kiki [Willems] was pulling up the other arm – I’m sitting on the floor laughing.” Of course, the moment went viral on social media.

Not that Lauren would be aware. She eschews technology as much as possible and got her first TV set since 1961 only five years ago. Plenty of people have tried to talk her into joining Instagram (wouldn’t that be a joy to behold?), but the way phones suck away our time scares her: “I found out how to text and the next thing I knew, three hours would be gone. It was just very shocking.”

After the Valentino show, Lauren and her agent went for dinner at Parisian hangout Le Voltaire, a favourite with supermodels. “As I was walking back out of the restaurant, there was a big black SUV there, with the back door completely wide open, and guess who’s sitting in it looking out? Harvey Weinstein.

“Everybody thought he was in jail but he was not, of course,” she says, bristling. “I think he was here because all the models were going there. He’s incorrigible.”

Lauren has spoken in the past about a brief encounter she once had with Weinstein in his infamous bathrobe. “He looked out [through a side door in the office] and then shut the door …” she told People magazine. “I could take him. I’d whack him. Maybe he understood when he took a look.”

She’s still dismayed by the culture of sexual abuse that has dominated so many women’s lives. “It’s always stunning. There’s something made in men to believe that they’re desperately wanted and they’re not.”

She talks about the men she has encountered on her travels who would “wiggle their eyebrows at me” when Bob Williamson, the partner, travel companion and manager she met when she was 21, wasn’t around.

Lauren thinks her relationship with Williamson, who died in 1997, protected her from the worst of “what the girls in the ’60s got very mixed up with”. She has good things to say about him now (“I can remember being saved five times [by him], and he read everything about the places we visited – not tourist books but history books”), but after his death, it was revealed that he had mismanaged her earnings, losing about $US30m.

Perhaps this helps explain why her work ethic remains so strong. Her latest role is as an ambassador for US cosmetics company StriVectin. 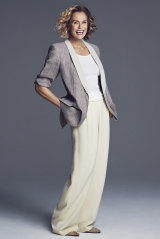 “The first thing you really see when you start travelling is that there are beautiful people of every size and shape and colour and age everywhere.”Credit:Michael Schwartz/Trunk Archive/Snapper Images

“They’ve got to be very brave and very smart to have a 76-year-old be their very first advertising image,” Lauren laughs. “I’d never used retinol before, but the S.T.A.R night oil makes a huge difference. And after that I use the moisturiser on the big lines, where I look like an African elephant.”

Graceful ageing has always been more Lauren’s thing than artificial assistance. She’s dabbled in Botox but now revels in her wrinkles. “You’re always tempted to go down that route and they keep finding new things to do, like removing your fat. But I’d rather have a face like an African elephant’s bottom anyway. I see a lot of women and it looks scary because they’re so smooth and don’t look real.”

Thanks to a near-death experience in 2000, Lauren was faced with the possibility of not seeing old age. She was taking part in a ride with the Guggenheim Motorcycle Club and driving at 180km/h when she was thrown six metres in the air, breaking her arm and leg and puncturing a lung. She was in a coma for 2½ weeks.

So what’s next? She’s spent a lot of time lately caring for her 96-year-old mother but is craving a diving trip to the South Pacific. She’s also craving the chance to make a difference, somehow – like Greta Thunberg, whom she cites as an inspiration.

“I’d sign up for another 100 years or so if I could. Most of all, I’d like to be proud of myself again. I’d like to find a way to be useful. I give money to the WWF and charities I care about. There’s got to be something I can do that’s monumental.”

Given her life so far, I have no doubt there is.

StriVectin is available at Priceline.

This article appears in Sunday Life magazine within the Sun-Herald and the Sunday Age on sale March 8.