Home » Celebrities » Bob Hope’s letters to troops is a touching reminder to thank veterans, daughter says: 'He loved those guys' 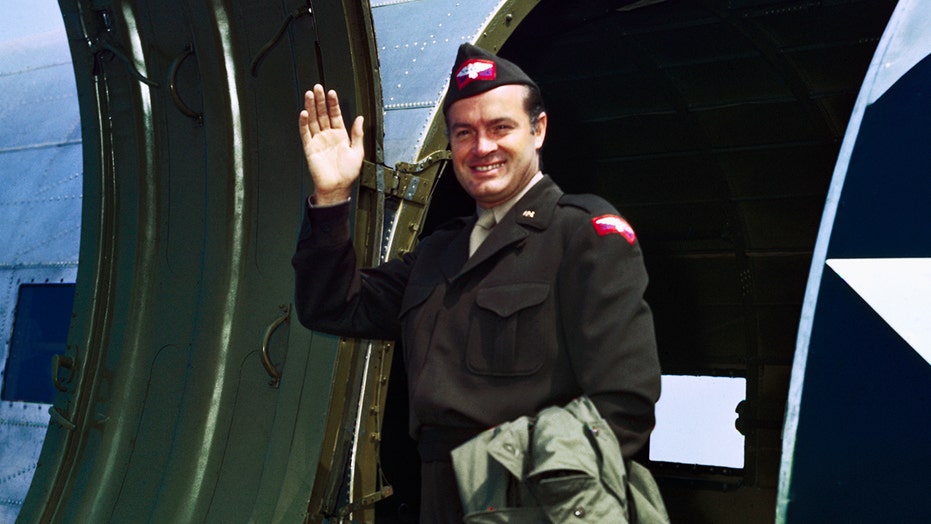 Bob Hope embodied many things in Hollywood, but to his daughter and family friend, he was a proud patriot who never forgot those who served our country.

The entertainer dedicated much of his nearly 80-year career to entertaining American troops both at home and abroad, USO.org reported. Whether it was performing on the front lines, befriending injured soldiers or personally writing heartfelt letters home, he was committed to using his talents to give thanks for their sacrifice. And he remained friends with many of those he encountered over the years.

“At the height of [WWII] Bob Hope was receiving 38,000 letters a week,” Martha Bolton told Fox News. “And these weren’t ordinary fan letters. These were letters written to their buddy, their pal, their dad, meaning Bob Hope. And it was just this connection that he had with the guys that went far beyond any kind of a celebrity fan connection. It was like family. They were his family… They were his closest family.” 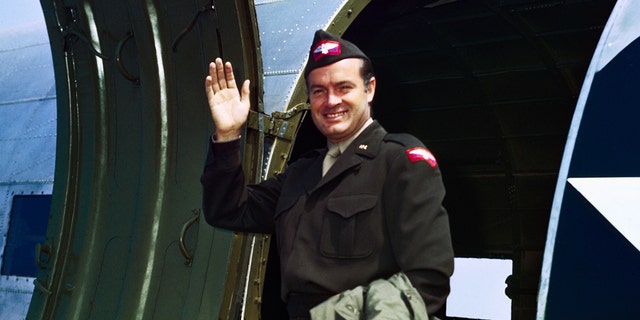 Bolton, who once wrote jokes for Hope, teamed up with his daughter Linda to write “Dear Bob: Bob Hope’s Wartime Correspondence with the G.I.s of World War II,” which was released earlier this year. The book chronicles personal letters, postcards, packages and more that were sent back and forth among the comic and the troops.

Linda described how growing up, the collection of letters, kept in multiple boxes, quickly grew over the years. 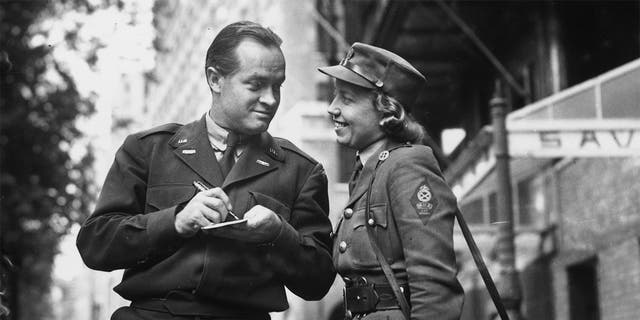 American comedian Bob Hope signing his autograph for a woman of the Motor Transport Corps outside the Savoy Theatre in London, before departing to Germany to entertain the troops.  Circa 1945.
(Photo by Keystone/Getty Images)

“I think he identified as a young man, which he was during those days, with the people [who] committed themselves to serve during World War II,” she explained. “And that was a massive, massive effort. I don’t think we’ve seen anything of that sort since then. But everybody wanted to do his or her part… [But] this was a different kind of a relationship… The letters themselves speak to the feelings that he elicits from these soldiers, sailors and marines.”

According to USO.org, the actor performed and broadcast his first USO show on the radio for service members in 1941 at an Army Air Corps, now known as the U.S. Air Force. He would go on to entertain the troops for nearly 50 years, the outlet noted, through World War II, the Korean War, the Vietnam War, the Lebanon Civil War, the Iran-Iraq War and the Persian Gulf War.

The Hollywood Museum also noted that Hope made a tradition of playing “Santa Claus” with annual shows at military and veterans hospitals throughout the U.S. And on Easter Sunday 1991, he and his wife Dolores Hope entertained 350 marines and their families at their house in Palm Springs, California. It was just one of many commitments Hope made in his decades-long career. 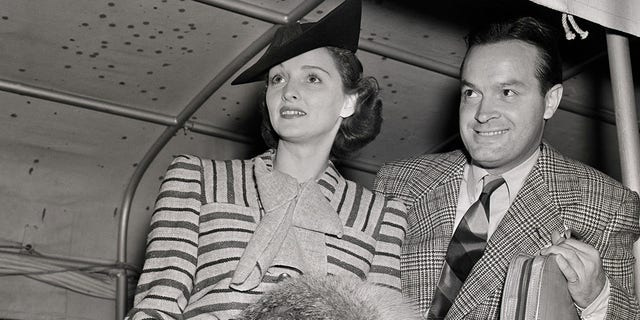 Comedian Bob Hope and his wife stand on the deck of the S.S. Normandie in New York, on August 2, 1939, on their way to Europe.
(Getty Images)

As one of the first major stars to join the USO in entertaining the troops, Hope insisted on traveling straight to the front lines, which would at times put him in harm’s way, just to perform and befriend our servicemen and women. Bolton said Hope’s last military show occurred when he was 87 years old. And even then, the star insisted on climbing in and out of helicopters, as well as ducking along with the troops at the sound of “incoming.”

“He could have retired,” said Bolton. “He could have had a very nice retirement cruising down to Rio and enjoying himself. But his joy came from being with the troops and being there for them not only in war but in peacetime. He was their champion when there wasn’t a war and there wasn’t much attention given to the guys. He was still going to champion their causes in any way he could.”

Linda described how one of Hope’s proudest achievements occurred in 1997 when Congress passed a measure to make him an honorary veteran of the U.S. military in recognition of his ongoing support. 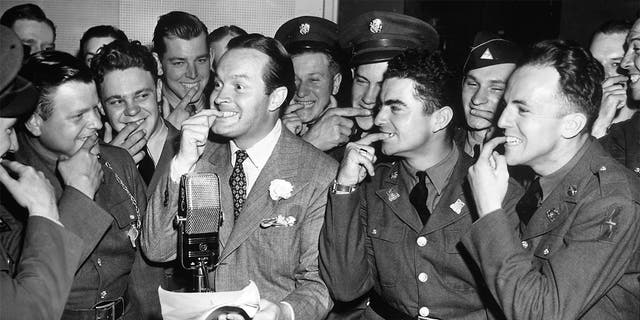 Bob Hope showing soldiers how to use Pepsodent toothpaste by using his fingers during radio show at NBC Studios during WWII.
(Photo by Mark Kauffman/The LIFE Images Collection via Getty Images/Getty Images)

“That was probably one of the most touching moments of his life and one of the most meaningful to be honored the same way and thought of as a G.I. because he loved those guys,” she said.

Bolton said veterans never forgot Hope’s tireless efforts. In addition to writing letters, they would also visit him on set while he filmed shows for NBC. She described witnessing “a mutual respect between them.”

“It was beyond being a supporter of the troops,” she said. “It went beyond an entertainer writing to fans back. [These letters] went to the depths of his soul. There was a connection there from the wounded that he saw at hospitals when he would walk through and visit with each of them and their letters where they would describe what they had seen [to him]… His commitment to them for 50 years, I think that’s where it came from. All those scenes that he saw stayed with him…. That’s what drove him. He had a passion for being there.” 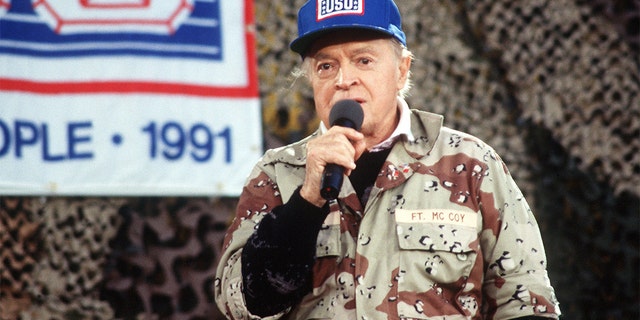 There’s not a day that passes by where Linda doesn’t think of her beloved father. And she hopes on this Veteran’s Day that people will be inspired by his efforts to reach out to our veterans and give thanks.

“I hope [these letters] give people a time to remember, a time to think about the sacrifices they made,” she said. “Some of the young boys [who enrolled] had barely finished high school. Some were older with families. And everybody was willing to work together and accomplish a goal, to do something just to bring peace to the world. It was clear what we were fighting for. And today, I think this country is so divided and so separated by all kinds of categories. And to have some of the spirit in the sense of sacrifice that these men and women had during that time… I hope it reminds them of the best of us.”

Today, Linda is determined to keep her father’s legacy alive through the Bob & Dolores Hope Foundation, named after her parents. It supports organizations that “feed, clothe and shelter America’s underprivileged.” She said it carries her father’s commitment to honoring those who served, as helping those in need, a cause dear to her mother’s heart. 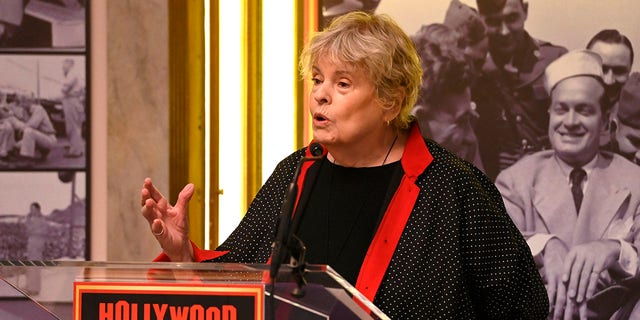 Author Linda Hope (daughter of Bob Hope) speaks at a pre-Veterans Day tribute at the signing event for the book ‘Dear Bob: Bob Hope’s Wartime Correspondence with the G.I.s of World War II’ at The Hollywood Museum on November 04, 2021 in Hollywood, California.
(Photo by Michael Tullberg/Getty Images)

“My parents set up this foundation and my dad funded it,” said Linda. “… We can be involved in several veterans’ organizations and do things to feed the hungry and to help the homeless. That’s what we’re doing – carrying on the best traditions of Dolores and Bob Hope.”

For Bolton, there’s no denying the significant impact Hope had on her life. 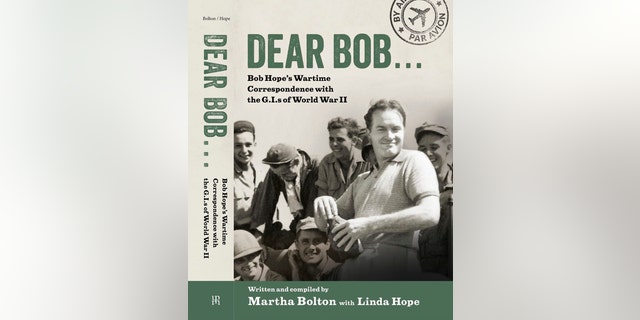 “We’re in a strange place in our country and we should be pulling together because we’re all Americans,” she reflected. “We should be pulling together. That’s what you saw in World War II. And that is so much of what he represented. He talked to Republicans and Democrats alike and joked about it and was there for them. He didn’t keep to his side. We were [just] together.  We’ve got to pull together and we can’t ignore the sacrifices that were paid back then. We’re enjoying the freedoms today because of those sacrifices. We not only need to honor the veterans on Veteran’s Day but this Thanksgiving, as we we’re thankful for everything that we have around us in our lives. Take the time to thank a veteran.”

Pink Spills The Secret To Her Successful 15-Year Marriage To Carey Hart!