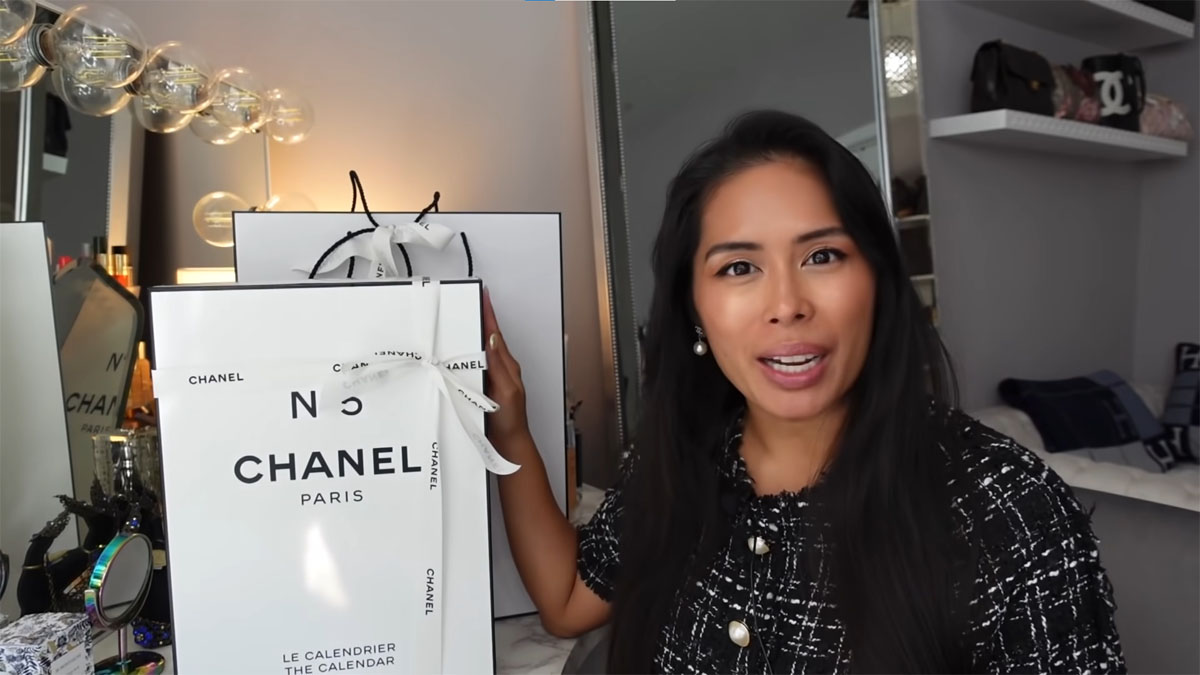 This is a screenshot from this video, also below, from A Heated Mess on YouTube

I’ve been seeing tweets about Chanel’s Advent Calendar, which sells for a whopping $825, not being worth the price at all. This news first broke on TikTok, when a woman named Elisa Harmon posted the contents of the calendar in a series of videos. It included stickers, a “bracelet” that looked like a bottle cap on a string, and a dust bag. Harmon claimed she was blocked by Chanel on TikTok after that and there were rumors that Chanel deleted their TikTok account.

Harmon explained in a follow up video that she bought the advent calendar in the store, where the contents were not shown to the consumers. The calendar is now sold out, but according to Harmon you could see the contents online before purchasing it from the Chanel website. There was a lipstick, nail polish and a small full size No. 5 perfume along with two mini perfumes and a snow globe, but the rest of the products were cheap freebies like stickers and weird-looking “jewelry.” I’ve embedded a TikTok below with the full contents and a video queued up to the end reveal. The YouTuber whose photo I posted above, A Heated Mess, called it “The most frustrating, overpriced $825 sticker book” in the title to her review.

Chanel has responded to this controversy by claiming their calendar is incredible and that it’s not true that they blocked Harmon since they never use TikTok. Plus they have an excuse for all those crappy products – they used sustainable materials. Here are some quotes that their president gave to Women’s Wear Daily.

Bruno Pavlovsky, president of fashion and president of Chanel SAS, said the French luxury house produced the calendar as part of this year’s celebrations of the 100th anniversary of Chanel No.5 perfume, and it did not expect the negative feedback.

“This controversy is a bit of a shame because it was not what Chanel intended. Chanel thought it would please some of its customers by offering this type of product. Evidently, we see that you have to be careful and therefore, in future, we will certainly be much more cautious,” Pavlovsky told WWD on Monday.

Asked whether this was the first time that Chanel produced an advent calendar, the executive said: “No, I don’t think so, but it wasn’t necessarily for sale.” He added that the 2021 calendar was produced in a very limited run, which was totally sold out.

A spokesman confirmed it was the first time Chanel had offered a calendar for sale.

This year’s edition retails for $825 and contains 27 boxes numbered from five to 31, containing full-size perfume and makeup products, miniatures and souvenirs all stamped with founder Gabrielle “Coco” Chanel’s lucky number.

In a video that has been viewed 14.7 million times, TikTok creator Elisa Harmon expressed her disappointment over items including stickers, a picture flip-book, a dustbag and a string bracelet with a wax seal-shaped pendant. She later alleged that Chanel’s TikTok account blocked her.

In an official statement, Chanel said the claim was “absolutely inaccurate,” as the brand is not active on TikTok.

“We have never blocked access to the Chanel TikTok account to anyone, because it is simply not active. It has never been activated, no content has ever been published, it has no subscriber and no subscription. The page therefore appears empty to anyone who visits it,” the house clarified.

“When Ms. Harmon visited our page, she naturally found the usual message that she could not access this account, just like anyone else on the network,” it added.

“We are very committed to sharing our world and our creations with our followers on social networks. Our pages are open to everyone, and millions of followers follow us all over the world. They are of course free to express their feelings and opinions, whether they are enthusiastic or critical, if they respect the rules of good conduct in accordance with the uses of social networks — no defamation, calls to violence, threats, or intimidation,” Chanel said.

“We are aware of the comments that are currently visible under our publications and are sorry that this calendar may have disappointed some people,” it continued.

“Directly inspired by the mythical silhouette of the No.5 bottle, this calendar, only available for a short period, has a unique design and an original content, which makes it a true collector’s item whose value cannot be summed up by the products it contains alone,” Chanel said. Pavlovsky said a special effort had been made to use more sustainable materials. “I think it is one of the most beautiful ever made, both in terms of design and the materials used,” he said of the calendar, which even Harmon praised for its sophisticated packaging.

How snotty is this response? So the takeaway is that the box is the best part of this I guess. I asked my friend Ameerah, who is a luxury beauty aficionado, you can see her YouTube Channel here, for a quote about this. She said “I love luxury makeup but there is no way in hell I would spend that amount of money on what is essentially a mystery box.” Ameerah added “Advent calendars in general are ripoffs. Very rarely does the value inside justify the price. I think Chanel did this because they knew they could and that people would buy it just to say they bought a Chanel advent calendar. Nothing in that box was going to justify the price tag.”

People seem to like the Dior advent calendar, which is $550 and contains mostly beauty products. However in the comments in a review by A Heated Mess on YouTube, a former Dior employee wrote “Everything except the candle are already giving [sic] out to the customers as a free gift with purchase and doesn’t have any value.” I was interested in the Charlotte Tilbury calendar as I splurged on one of her products once, but I found negative reviews for that too. Ameerah is right, these advent calendars aren’t worth the price. Just buy the full size products you’re interested in.