Family time! Gigi Hadid and Zayn Malik enjoyed a lunch date with their baby girl, who is now 7-months-old.

Gigi Hadid, 25, and Zayn Malik, 28, are so in love with their 7-month-old daughter Khai! The couple were spotted strolling around New York City on Thursday, March 25 before heading to lunch at The Smile. Outside of the NoHo Mediterranean spot, Gigi and Zayn both stopped to lovingly gave at little Khai, who was nestled up in her stroller. How sweet! Later, they were seen crossing Bond Street as they made their way past various clothing shops, bars and boutiques. 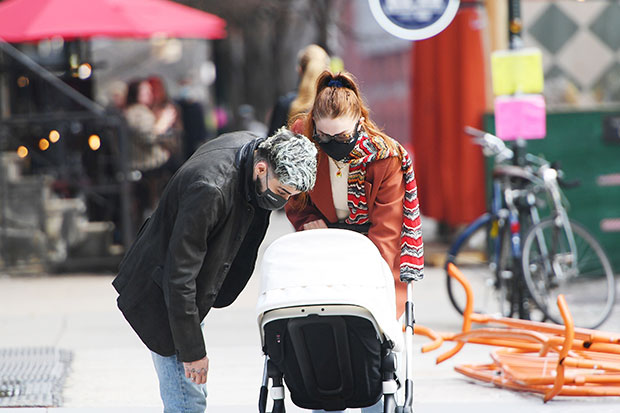 The Maybelline model looked cool and casual as she rocked a loose fitting, rolled up pair of faded jeans, and a pair of on-trend high yellow socks. She kept the ’70s vibes going with an oversized rust blazer and printed scarf, keeping her eyes hidden behind a pair of tortoise sunglasses. At one point, she was also seen squeezing Zayn’s nose! Just seven months after giving birth, she confidently wore a nude colored crop top underneath the jacket — showing off her toned tummy. Gigi, who had her hair thrown back into a scrunchie, finished her look with a  a pair of walking friendly Reebok sneakers, a protective black face mask and chain necklace. 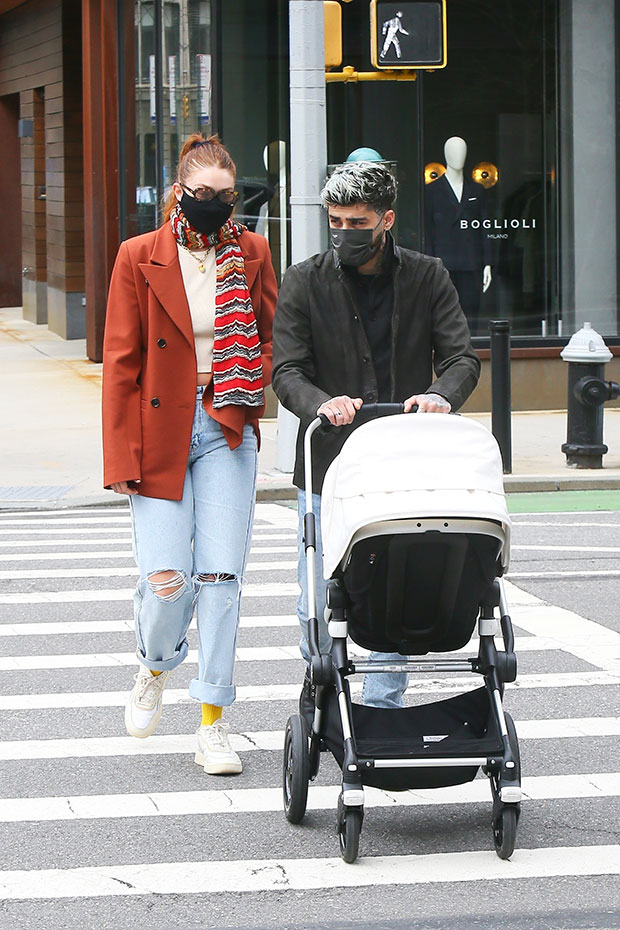 For his part, Zayn wore what appeared to be a suede shirt jacket and jeans, adding a pair of black leather sneakers. He also sported his protective black mask while on the outdoor walk, proudly pushing the stroller as Gigi walked by his side. The former One Direction member was also rocking blue tipped hair that was styled with gel.

Recently, Zayn opened up about becoming a first-time dad. “Honestly, it’s amazing,” he spilled on iHeartRadio’s Valentine in the Morning. “A lot of people that I was speaking to, obviously, before she was born and stuff were like, ‘It’s a big adjustment, and it’s going to be a massive change and stuff,’…But honestly, she’s an amazing baby. It’s been really easy for me and Gigi to kind of just ease into it. She kind of made it easy for us, she sleeps really well, she loves her milk. It’s just feeding and changing diapers at the moment. It’s wicked. I’m enjoying it, for sure,” he also said of their big life adjustment.

Gigi, who gave birth at her family’s farm in Pennsylvania, has also been open about life as a mom — particularly when it comes to her post-baby body. “I know that I’m not as small as I was before, but I also am a very realistic thinker,” she said to Vogue‘s for their Feb. 2021 issue. “I straight up was like, ‘Yeah, I’ll shoot a Vogue cover, but I’m obviously not going to be a size 0,’ nor do I, at this point, feel like I need to be back to that….I also think it’s a blessing of this time in fashion that anyone who says that I have to be that can suck it,” she added.

Rihanna Connects With PartyNextDoor To Release First New Music In YEARS! Listen To Believe It HERE!!