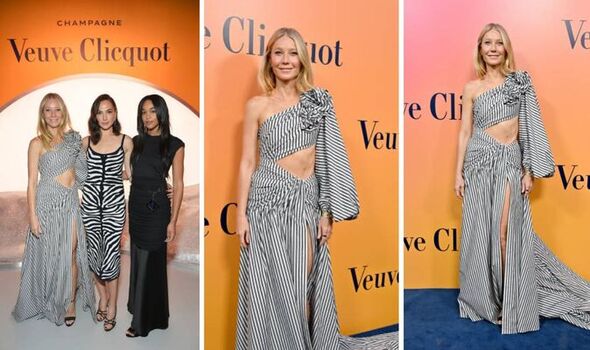 Gwyneth Paltrow is the figurehead of Goop, a controversial wellness brand

Alongside her entrepreneurial career, she is also a celebrated actress, best known for films such as Iron Man one, two and three alongside Robert Downey Jr.

Gwyneth Paltrow, 50, has appeared alongside other stars such as Gal Gadot at Veuve Clicquot’s Solaire Culture Exhibit in Beverly Hills this Tuesday. A large cohort of famous faces marched across the blue carpet for the event, thrown to mark the 250th anniversary of the legendary champagne brand.

The actress bared her sculpted midriff to fans while wearing a striped monochrome peekaboo gown that fell enticingly off one shoulder.

It had floral accents over one shoulder alongside a luxurious train dragging behind its wrap skirt, which was split so Gwyneth could show off her stunning legs.

She elevated her frame with a pair of black open-toed ankle-strap stilettos.

Gwyneth is the figurehead of Goop, a controversial wellness brand, alongside being a celebrated Hollywood actress.

Gwyneth Paltrow made an appearance at the fete in Beverly Hills

The star was wearing a breezy black-and-white striped gown by Carolina Herrera.

Meanwhile, her hair was styled down in relaxed waves as she wore rosy makeup with a smokey eye.

On September 27, Gwyneth spoke to People about the milestone of turning 50

“I really flipped out when I turned 40, because I thought, ‘My life is over. I’m not going to be attractive anymore, and society isn’t going to want me.”

Gwyneth Paltrow said she has begun to feel more confident

She said she can still be “thrown off” but knows who she is for the “most part”.

Gwyneth Paltrow is the recipient of various accolades, including an Academy Award

She has also won a Golden Globe and a Primetime Emmy Award.