Four months after filing for divorce from Kim Kardashian after nearly seven years of marriage, Kanye West has shown he is ready to move past it all. The rapper and Yeezy designer was linked to Russian supermodel Irina Shayk in early June when the two were spotted in Provence, France, around his birthday, as People reported at the time. Citing an unnamed source, People revealed that West and Shayk, who had previously dated and has a daughter with actor Bradley Cooper, are not exactly in a relationship but have been spending quality time together.

“They’ve been dating for a couple months now, from talking to meeting and now taking a trip for his birthday. Kanye loves that Irina is very easygoing and a laid-back person to be with,” a source told Us Magazine. West and Shayk have several interests in common, beginning with their mutual love and work in fashion. “Kanye also loves that Irina is an established and respected model in the fashion community. He loves that she carries clout with the fashion world,” the source added.

Kardashian isn’t worried that her ex-husband and father of her four children is already seeing other people, according to a separate Us Magazine report. Per the cited insider, Kardashian “isn’t dating anyone new yet,” but the source assured the publication that she has “completely moved on from Kanye.” But has the “Keeping up with the Kardashians” star ever met Shayk? Keep reading to find out.

Kim Kardashian has met Irina Shayk in the past 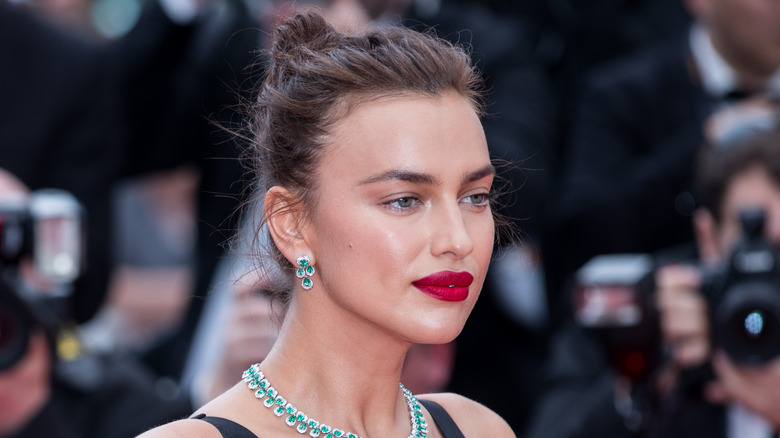 Irina Shayk is no stranger to Kim Kardashian. Citing an unnamed source, Us Magazine revealed that Kardashian has met Shayk “briefly several times” in the past as “they share some mutual friends.” The insider didn’t elaborate further, but both Shayk and Kardashian are involved in the fashion industry, the former as a model and the latter as a designer and businesswoman.

The source also added that Kardashian “likes Irina from what she knows.” In fact, earlier reports noted that Kardashian doesn’t mind that Kanye West is dating the Russian stunner. According to another Us Magazine article, the respectful way Shayk handled her high-publicized breakup from Bradley Cooper gives Kardashian peace of mind that she won’t be causing trouble. “Kim doesn’t mind because she saw how quiet and respectful Irina was after she broke up with Bradley,” a source told Us Magazine, adding that Kardashian “wouldn’t like” to see her ex-husband dating a person “who’s going to talk to the press.”

Shayk and Cooper’s separation drew a lot of attention in June 2019. But it looks like the model and her ex, as well as Kardashian and West, are ready to move on with their lives.