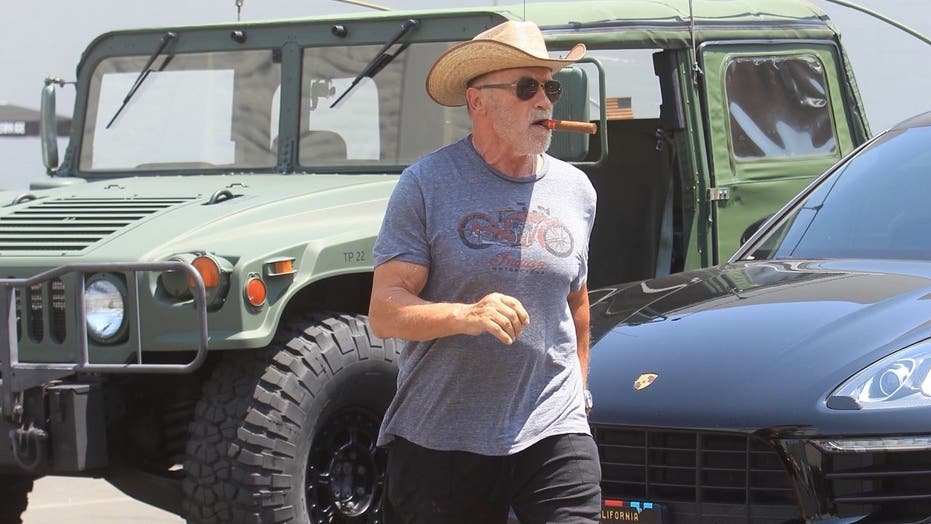 Arnold Schwarzenegger was seen stepping out on Friday in Beverly Hills, Calif., days after he called mask-averse Americans “schmucks” and said, “screw your freedom,” to those seeking to terminate COVID-19 mandates.

The former governor of California was spotted wearing a grey tee and black shorts paired with sunglasses and a cowboy hat.

A maskless Schwarzenegger also chomped on a cigar for the outing where he hung out with friends and drove his custom Hummer throughout the city.

Earlier this week, the “Terminator” franchise star, 74, made his case for people to shelve the argument that their “freedom” was more important than the coronavirus pandemic.

“People should know there is a virus here,” he said during the interview, which he also shared on his social media accounts. “It kills people, and the only way we prevent it is to get vaccinated, wear masks, do social distancing, washing your hands all the time, and not just to think about, ‘Well, my freedom is being kind of disturbed here.'”

In an op-ed for The Atlantic on Friday, Schwarzenegger said: “I’ll admit, calling people schmucks and saying ‘Screw your freedom’ was a little much,” though he still stood by the statement.

Schwarzenegger explained that his passion for “keeping America great” could cause him to lose his “temper.”

He then shared in the piece titled, “Don’t Be a Schmuck. Put on a Mask,” that he knew he’d be “called a RINO” but it “doesn’t bother” him. 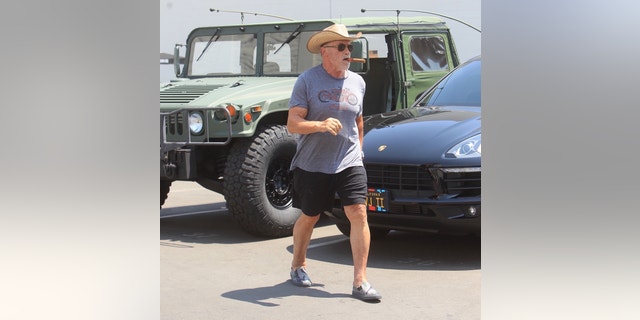 Maskless Arnold Schwarzenegger seen in Beverly Hills. The former governor of California was spotted wearing a grey tee and black shorts paired with sunglasses and a cowboy hat.
(Be Like Water Media / BACKGRID)

“I’ve got thick skin stretched over my metal endoskeleton, so I knew I could take it,” he noted.

Schwarzenegger went on to explain how some of the responses to his sit-down interview “really worried” him, making him realize “we all need a civics lesson.”

“I can’t help but wonder how much better off we’d be if Americans took a step back from politics and spent a minute thinking about how lucky we are to call this country home,” he said. “Instead of tweeting, we could think about what we owe to the patriots who came before us and those who will follow us.”

Schwarzenegger later added: “It’s up to all of us to recognize that the great privilege we have of being Americans comes with the great responsibility to keep this country No. 1.”

The dad of five noted that America was founded on the “willingness to make personal sacrifices for the collective good,” but he fears that many Americans “have now lost sight of that.”

Schwarzenegger emphasized that “we need to protect ourselves and win this war.”

“We don’t need to close our economies again,” he stated. “We just need to come together like the generations of Americans who came before us, and to give just a tiny fraction of what they gave.

“We need to prove to ourselves and to the world that we can unite to defeat a common enemy, because, trust me, the coronavirus is not the biggest challenge we will face this century.”

Schwarzenegger concluded his op-ed with a question, asking his readers: “What will you do for your country?”

In January, the “Kindergarten Cop” actor announced on Twitter that he’d received a shot.

“Today was a good day. I have never been happier to wait in a line,” Schwarzenegger wrote alongside a video on himself getting an injection. “If you’re eligible, join me and sign up to get your vaccine.”

In reference to a famous line from “The Terminator,” he added: “Come with me if you want to live!”