Home » Celebrities » Max von Sydow, who has died aged 90, said no to playing Dr No

He was known for his iconic roles of Ming the Merciless and The Exorcist priest, but Max von Sydow, who has died aged 90, was also the Hollywood baddie who said no to playing Dr No

He was Hollywood’s most haunting screen presence, the first actor to play both Jesus and Satan on the big screen.

The word ‘brooding’ could have been invented for Max von Sydow, who as the stern and gaunt, devil-battling priest in The Exorcist was arguably even more sinister than his demonic opponent spewing vomit from the bed.

The star has died aged 90 after a career that began with Ingmar Berman’s sombre Swedish cinema classics and ended with the bloody Game Of Thrones. 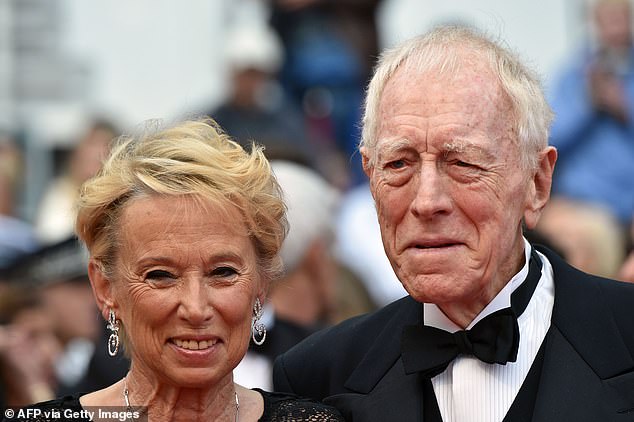 Max Von Sydow and wife Catherine Brelet are pictured at the Cannes Film Festival in 2016. Born in 1929 to an academic and a teacher, he was baptised Carl Adolf von Sydow, but later changed his first name to Max, astutely noting that his given name was ‘not a good name’ after World War II

His wife, French documentary producer Catherine Brelet said yesterday that the Swedish-born actor, who became a French citizen in 2002, died on Sunday in France.

‘It is with a broken heart and with infinite sadness that we have the extreme pain of announcing the departure of Max von Sydow,’ she said.

Among tributes from across the industry, the British comedy film director Edgar Wright called him a ‘god’ who ‘changed the face of international cinema’. 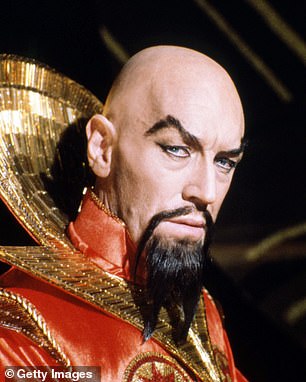 He noted how Von Sydow managed to earn an Oscar nomination for a role in which he never uttered a word — as a character in the 2011 film Extremely Loud & Incredibly Close who communicates only with ‘yes’ and ‘no’ hand signals and a writing pad.

Despite being hailed as one of the greatest cinematic stars of his generation, he never had any time for such a frivolous place as Hollywood.

He refused to live there — making his homes in Rome and Paris instead — and said he never wanted to be part of a film community where ‘even people who were not in the industry seemed to be acting parts’.

He also complained bitterly about Tinseltown’s tendency to judge an actor’s performance by the success or failure of the film.

Hollywood never knew whether to categorise the craggy-featured, 6ft 4in Norseman with electric-blue eyes, a steely gaze and deep voice as a goodie or a baddie — he played a lot of both in a career that spanned seven decades.

Either way, he was always cast as a stern and unsettling force. ‘Perhaps I scare people, I don’t know,’ he once said, laughing. ‘I don’t know where they get this, but . . . I don’t mind.’

Von Sydow actually initially turned down Hollywood’s most famous bad-guy role, that of a James Bond villain, saying ‘no’ to playing Dr No in the 1962 film starring Sean Connery.

He did however play the cat-caressing villain Ernst Blofeld two decades later in Never Say Never Again. He also reportedly turned down the role of Captain von Trapp in The Sound Of Music.

Instead, for his first U.S. film, he signed on to play Jesus Christ in the 1965 epic The Greatest Story Ever Told (upstaged by John Wayne’s memorably bad role as a centurion at the crucifixion) and, if that wasn’t saintly enough, he next played a missionary who was almost led astray in Hawaii by — of all people — Julie Andrews.

He also played neo-Nazis, ex-Nazis and interstellar Nazis — the evil world emperor Ming the Merciless — in a 1980 screen adaptation of Flash Gordon.

‘I really enjoyed that film,’ he said, despite having to utter lines that included: ‘Prepare her for my pleasure.’ He had grown up reading Flash Gordon comic books ‘so it was sort of nostalgic for me’.

Despite his serious roots in the films of Ingmar Berman — his first major role was as a knight who plays chess with Death in 1957’s sombre The Seventh Seal — he was relaxed about doing far more downmarket fare for Hollywood. 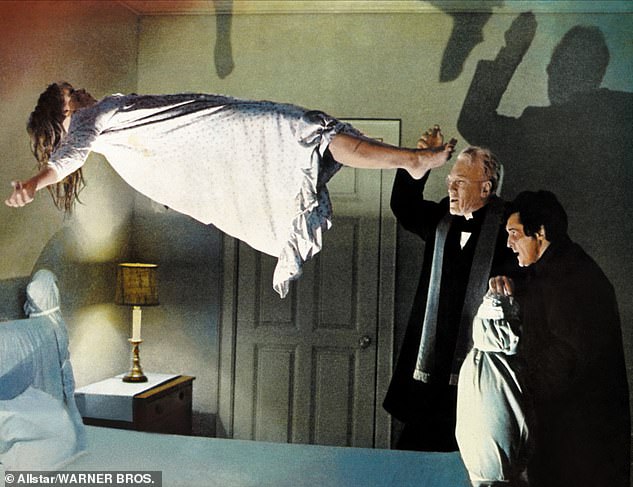 A scene from the 1973 film The Exorcist, in which Von Sydow played Lankester Merrin. The word ‘brooding’ could have been invented for Max von Sydow, who as the stern and gaunt, devil-battling priest in The Exorcist was arguably even more sinister than his demonic opponent spewing vomit from the bed

Fluent in Swedish, Danish, French, English and Italian, he insisted he’d never had career ambitions beyond Sweden, but he was a working actor and couldn’t turn down the huge cheques that Hollywood flashed at him.

He was more disappointed by being typecast as a ‘foreigner’, once saying: ‘Because I am not English or American, the parts I get are the foreigners.’ Whether villains, mad scientists or artists, they were ‘always an outsider’. He also hated cliched characters.

For instance, he liked playing a principled, fedora-wearing hitman out to kill Robert Redford in Three Days Of The Condor because he wasn’t a ‘cliche villain’.

Similarly he enjoyed the Devil in the 1993 version of Stephen King’s chiller Needful Things because, with lines such as: ‘I’m just one lonely guy,’ he wasn’t a cliched villain either.

Von Sydow ultimately preferred to play not God or the Devil but ordinary people facing ordinary challenges — such as the hapless Swedish farmhand in the 1987 Scandinavian film Pelle The Conqueror, for which he was nominated for an Oscar.

The film’s producer, Per Holst, recalled fearing he couldn’t afford an actor as famous as von Sydow.

A call to the actor’s agent convinced him he was right as the agent listed the ‘usual arrangements’ such as private jets, chauffeur-driven limos and champagne for breakfast.

‘I thought: “Oh God, how am I going to pay for all this”, before I heard loud laughing at the other end of the phone,’ Holst told the New York Times.

‘He was joking of course. Max was never difficult, never made special demands and he stayed in the same huts as everyone else.’ 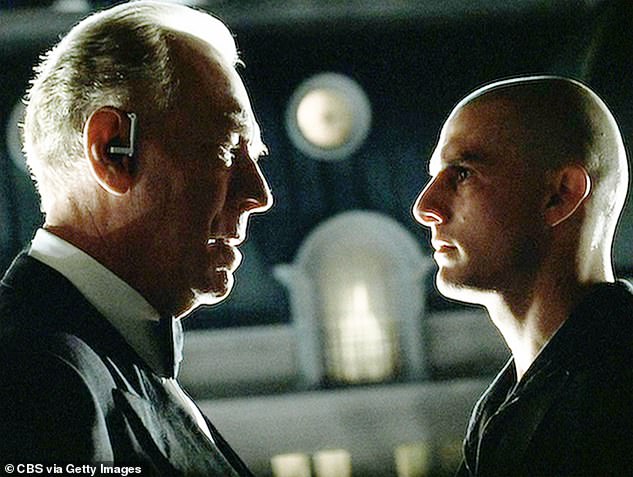 Although he had leading man looks, his heavy accent inevitably meant character roles — sometimes as men decades older than his age. He was only in his mid-40s when he played the stooped grey priest in The Exorcist.

In later years, his gaunt features and sonorous voice were put to good use as he earned a new generation of fans.

As well as having a cameo in The Simpsons, he played a retired adventurer in Star Wars: The Force Awakens (2015) and the ancient seer known as the Three-Eyed Raven in the enormously popular TV series Game Of Thrones.

‘As you get older you get offered old characters and very often old people die in the middle of the script,’ he once observed with classic Scandinavian cheerfulness.

‘It’s sad, but not very interesting.’

Born in 1929 to an academic and a teacher, he was baptised Carl Adolf von Sydow, but later changed his first name to Max, astutely noting that his given name was ‘not a good name’ after World War II. 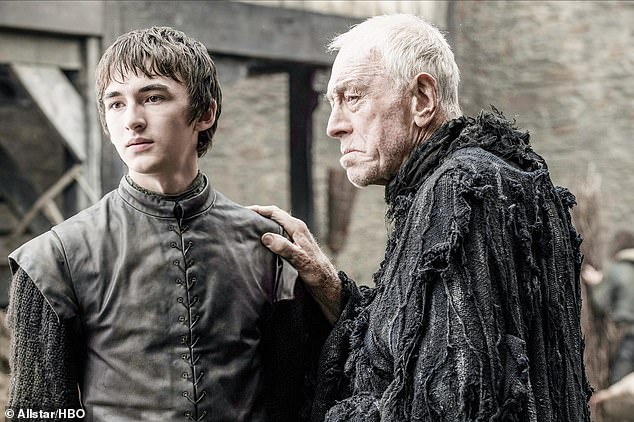 He was incredibly shy, but a school trip to see A Midsummer Night’s Dream on stage sparked a passion for acting.

His private life was hardly Hollywood. A first marriage, in 1951, to Swedish actress Christina Olin, produced two sons (who appeared with him in the film Hawaii) but ended in divorce in 1979. A second marriage to Catherine Brelet came in 1997 and he became a French citizen.

Despite literally playing God, von Sydow insisted for years that, personally, he was either agnostic or atheistic.

However, he revealed that, in their frequent conversations about religion, his director friend Ingmar Bergman had assured him he would contact him after he had died to prove there was an afterlife.

Von Sydow claimed that Bergman did indeed contact him ‘many times’ after his death in 2007. He didn’t say how this happened but said that, as a result, he was no longer a doubter and he, too, believed in the afterlife.

No doubt this magnificent actor will now get to see for himself.