Jeremy Renner is mainly known for his role as Hawkeye, real name Clint Barton, in the Marvel Cinematic Universe (MCU).

The archery-based Avenger is one of the few heroes with a family and children, which makes him a sympathetic favorite of many Marvel fans. Renner is also beloved by Marvel fans for a different, more aesthetic reason.

That reason is Renner’s ridiculously ripped body, specifically his two massive biceps. Renner’s character may be a dad, but he surely does not have a dad bod.

Who is Jeremy Renner in the MCU? 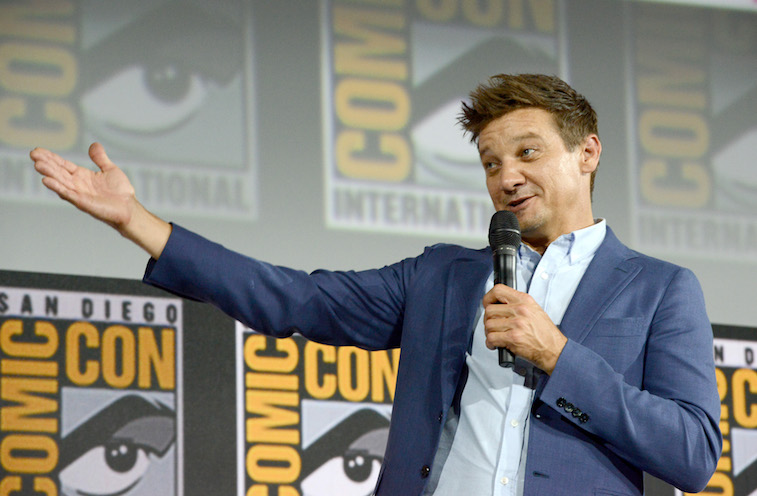 Renner’s first appearance in the MCU as Hawkeye was a brief cameo in 2011’s Thor. The S.H.I.E.L.D. agent is assigned to guard the god of thunder’s hammer Mjolnir, when it crashes on Earth. Marvel fans received more information about Hawkeye in The Avengers, where he helps his super-powered buddies defend the Earth against the trickster god Loki (Tom Hiddleston) and his alien army.

Hawkeye, like his best friend Natasha Romanoff a.k.a. Black Widow (Scarlett Johansson), does not have any mystical or magical superpowers. He does however, have extraordinary eyesight and aim when using a bow and arrow. This long-range skill is aided by various technological additions to his arrows. He is also quite skilled with a katana blade, as seen in his revenge-fueled rampage in Avengers: Endgame.

Renner is also known for his starring roles in hit films like The Hurt Locker, The Town, and American Hustle. His roles in The Hurt Locker and The Town earned him Oscar nominations. The controversial actor also previously had his own Jeremy Renner App, but online trolls and backlash forced Renner to shut it down.

Renner’s biceps in ‘The Avengers’

With the upcoming release of the delayed Black Widow, Hawkeye, and the Ruffalo version of Hulk, are the only two original team members to not have their own self-titled film. In The Avengers, Renner has noticeably massive muscles, most notably his biceps.

In a film full of action-figure like human figures, Renner’s body stands out. He uses these muscles to believably fire off a number of incredibly accurate arrows.

He is also able to hold his own in hand-to-hand combat with Black Widow, an impressive feat of strength. Renner’s large muscles and action film experience make for a believable hero, especially one that is based on human strength and skill instead of other-worldly powers.

RELATED: Jeremy Renner’s Hawkeye Had the Worst Comic-to-Screen Adaption in the MCU, According to Fans

In a throwback picture that features Renner, Evans, and Johansson posing in costume with the Marvel legend and creator of their characters Stan Lee, some fans commented on the size of Renner’s arms.

Renner’s raging biceps were out of commission for a short time in 2018, as Renner broke both of his arms while playing the most important game of tag of all-time in the comedy film Tag. His injuries consisted of a fractured elbow on his right arm and a broken wrist on his left arm.

Renner received the injury while attempting a stunt that required him to jump over a stack of chairs. This setback did not stop the action star from shooting, either the rest of the Tag role, and his role in various MCU films.

Renner and his arms have been involved in some controversy lately, but it is likely that he will continue in the role of Hawkeye. Fans will have the opportunity to gawk at Renner’s muscles in the upcoming Hawkeye television show, which is set to stream on Disney Plus sometime in the fall of 2021.

‘Gossip with Celebitchy’ podcast #92: Kate’s stylists are trolling her