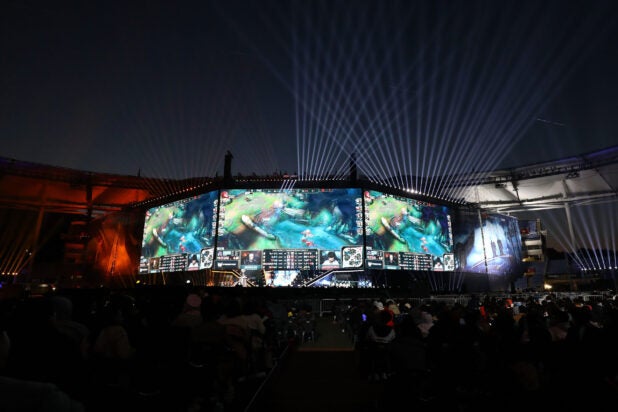 As this story is being published, there are an estimated 2.5 million people across the globe streaming gaming videos on Twitch.

So far, while tech companies left and right are asking employees to stay home, gamers have more time than ever during the work week to play and engage with competitions they love.

“Both (platforms) reflect the popularity of the livestreaming medium now that people are consuming higher volumes of entertainment from home,” Nir told TheWrap. “With more stay-at-home mandates being issued around the world and the entertainment industry finding new ways to migrate their offerings to livestreaming platforms, we expect to see these numbers rise.”

Twitch did not comment on the figure and declined to share specific viewer statistics with TheWrap. It is one of several streaming platforms that gamers can go to for video content on their favorite titles; it competes with Caffeine and Microsoft-owned Mixer.

According to SocialBlade, an analytics website that tracks viewer and subscriber stats for popular streamers on each platform, the data suggests it’s been a busy couple of weeks for gaming content creators.

Each of the top 5 viewed broadcasters (ranked by views) on various platforms experienced an uptick in views throughout the past 13 days. The average increase on Twitch was roughly 451,875 views. It’s worth noting that two of these top five accounts are operated by a gaming company rather than an individual — SocialBlade’s top streamer is Riot Games, the West LA-based operator of “League of Legends.”

Riot decided to move its League of Legends Championship Series to online-only competition, and the league will be virtual for the rest of the season. The first online match will be held March 21, and Riot will hold the finals in its home stadium in West LA, instead of Dallas.

Viewers are flocking to the online content, sometimes in larger crowds than stadiums could even hold. The last Riot-streamed LCS event attracted over 29,000 viewers.

“Online viewership has always dwarfed in-person attendance and there have been successful events that have been executed solely online,” Nir said.

It’s easy to spend more time with esports content if you’re consuming it online, and fans of the genre tend to be very loyal to it. This week, fans spent 3.8 million hours watching the top streamer on Twitch (Jaryd “Summit1G” Lazar), according to analytics platform ESCharts.

Watching a competition online makes it easy to lapse into two, and then many more, especially if the videos auto-play — which is a trademark of YouTube, another esports and gaming broadcaster.

Other platforms are noticing a boost in traffic — The Hollywood Reporter said Verizon reported video game usage has gone up 75% in a week and game streaming increased by 12%.

User analysis platform SteamDB, which monitors traffic on Valve’s online games marketplace Steam, said during the weekend of March 14 Steam’s user count peaked at a record high of 20.3 million users worldwide. Whether that’s directly tied to the virus, we can’t confirm. But the service’s previous apex was roughly 19 million users simultaneously logged in about a month ago.

Jud Hannigan, chief executive of Allied Esports, the esports division of events firm Allied Esports Entertainment, said “we anticipate viewer numbers will go up” over the next few weeks. Hannigan said for Allied, it’s too early to tell if more viewers are engaging with its content. But he noted, “as we roll out these online events we anticipate increased participation online that will lead to increased viewership.”