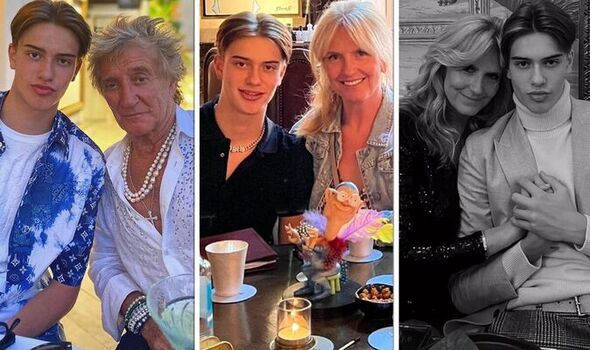 Aidan Stewart caused a stir on his birthday, as fans spotted his resemblance to his lookalike dad Sir Rod.

The model gushed in view of her 161,000 followers: “So proud of my boy happy 17th @alastairwstewart.”

Penny, who stunned in a denim jacket for the outing, could be seen smiling from ear to ear while enjoying a dinner at a restaurant with Alastair, who looked dapper in a black short-sleeved shirt, paired with a silver chain.

The Loose Women star also posted a glammed up black and white snap, which was taken during a family night out.

Many fans rushed to the comments section to praise Alastair and send him birthday wishes, while also pointing out that he is the spitting image of his rockstar dad.

christmascarol7172 added: “He looks more and more like Rod every day! HBD.”

However, fan jayneweaver5 suggested: “Definitely takes after his mum.”

Penny Lancaster often shares an insight into family life with her rocker husband on her Instagram page.

Rod Stewart is a father to eight children, six from previous relationships

Sir Rod is very proud of his blended family, after welcoming his youngest sons with wife Penny Lancaster.

Rod is a big fan of Celtic F.C., and has introduced his passion for the team to his children.

Penny Lancaster and Sir Rod have been married since 2007

Penny Lancaster and Sir Rod recently went on holiday with his children in a rare get-together for all the family.