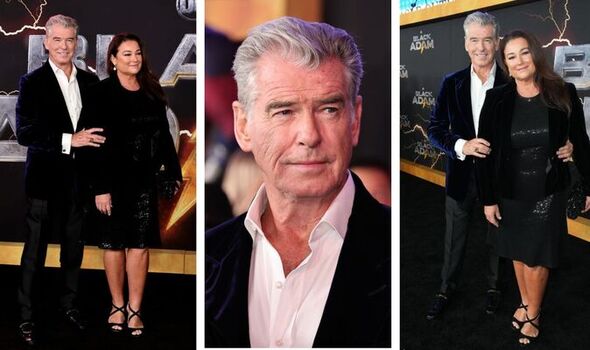 Pierce Brosnan has been married to his wife for 21 years, and shares two kids with her, but the pair looked more loved-up than ever as they attended the movie premiere in New York yesterday.

Pierce Brosnan, 69, constantly clung to his wife’s waist or held her hand as he celebrated the premiere of Black Adam.

The actor is married to journalist Keely Shaye Smith, who is ten years his junior, and the chemistry between the inseparable couple was clear as they walked the red carpet.

The James Bond star, who appeared in classic movies including Die Another Day, Golden Eye, Tomorrow Never Dies and The World Is Not Enough, donned a navy blue velvet blazer, paired with a white shirt, black trousers and patent leather loafers.

Meanwhile, wife Keely, to whom he has been married for more than two decades, raised a grin in a sparkly black midi dress, paired with a coordinating black velvet blazer.

Pierce rocked his natural salt and pepper hair with confidence, as the pair showcased their appearances in later age gracefully and looked spectacular.

Despite retaining his natural hair colour, which now includes some greys, Pierce Brosnan still looked spectacular and a mere fraction of his age, as the distinguished star joined his lovely-looking wife.

In a recent interview, Pierce Brosnan told the world he had worn his real wedding ring throughout the movie, for the first time ever, as he continues to celebrate his romance with Keely 21 years on from formalising their marriage.

Pierce Brosnan held the hand of Hirim Garcia on the red carpet, whose movies have collectively raked in more than $4 billion at the box office.

Pierce Brosnan shared the spotlight with his co-stars, too

Pierce Brosnan and Keely Shaye Smith have appeared at numerous events as a couple over the years, including this stunning highlight of their trip to Cannes Film Festival pre-pandemic.

Pierce Brosnan is most famous for his performances as James Bond

Despite enormous success over his career, his starring roles as Bond are perhaps the most memorable of all for fans. Pictured here in a still for The World Is Not Enough, he barely seems to have aged a day.

Patrick Schwarzenegger Is on the Move in L.A., Plus Lucy Hale, Isla Fisher and More