Sia is notoriously private about her personal life, but let’s be real—you already knew that. Half the time we see Sia, she’s covering her face with a larger-than-life wig as a way of granting herself more privacy. But despite staying relatively hush hush about the happenings of her daily life, Sia just revealed something beyond major: She recently adopted two teens! 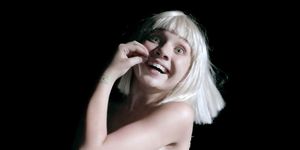 “I actually adopted two sons last year,” Sia shared during an appearance on SiriusXM’s The Morning Mash Up. “They were 18. They’re both 19 now. They were aging out of the foster care system, and I love them.” Aww!

Sia also shared how her two sons have been handling the current quarantine period, and much like everyone else, it’s been a bit of a struggle for the boys. The good news is that Sia’s doing her best to keep them busy. “They are both finding it pretty difficult, one more so than the other,” Sia admitted. “But they’re both doing things that are like really good for them right now. That are really helpful. They’re really doing a lot of educational stuff that’s good for them.”

The first time Sia talked about being a mother was in Diplo’s interview with GQ from February, where she also casually mentioned she wouldn’t mind hooking up with Diplo. “This year I wrote him [Diplo] a text, and I said, ‘Hey, listen, you’re like one of five people that I’m sexually attracted to, and now that I’ve decided to be single for the rest of my life and I just adopted a son, I don’t have time for a relationship…If you’re interested in some no-strings sex, then hit me up,’” Sia told the mag.

I’m unsure of how Sia’s *ahem* mission for a friends-with-benefits relationship with Diplo turned out, but hey, at least her sons are doing just fine!

Scott Disick Says Sofia Richie Dropped The Ultimate Ultimatum On Him Prior To Their Split – Jeez!

Malika Haqq Shares First Photo Of Her Son: ‘Best Week Of My Life’