Home » We Found It! The WORST George Floyd Take On Twitter!

As you probably heard, the Derek Chauvin trial has ended with the shocking verdict of GUILTY on all counts — and we say “shocking” because we’ve grown so used to injustice over the years.

While it’s been pointed out quite a bit in the cacophony of reactions that this isn’t exactly justice for George Floyd himself — as he can’t be brought back to life — his killer being found guilty must come as great comfort to the family he left behind.

Not to mention, this is a grain of hope for people of color throughout the nation that there CAN be accountability for white police officers who commit unnecessary violence against them. In other words, that Black Lives Matter will become a legal reality rather than just a movement.

OK, so this is a huge watershed moment that many did not expect. So it makes sense when CNN anchor Don Lemon was asked to give his reaction to the verdict being read live on the air, his first statement was simply to say:

“Justice has been served.”

He went on to speak about the family and much more, but that emotional moment — around the 5:00 mark (below) is definitely worth a watch:

It was upon seeing this reaction that conservative pundit Ben Shapiro felt the need to show off his amazing galaxy brain yet again.

In response to Lemon’s statement of justice being served with the guilty verdict, the Daily Wire editor tweeted with what we can only imagine was a misplaced smirk:

Well… yes. He would not have said justice had been served. Because if the OTHER verdict had been reached, a man we all watched mercilessly kill another man would have gone free. Which would not have been justice. So… yes?? 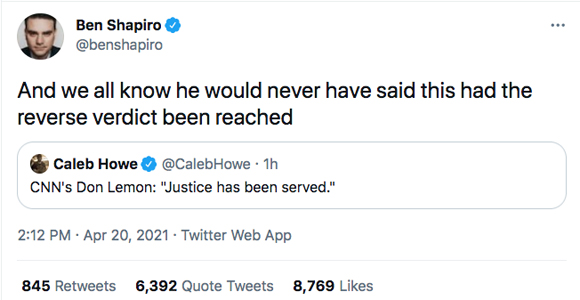 The hilarious thing is how this guy somehow passes for an intellectual — even a wunderkind — in conservative circles. And this is his genius reaction, pointing out that if this hadn’t happened, people wouldn’t be saying justice had been served.

Hey, we’ll go you one further, Benny! “If Derek Chauvin hadn’t killed George Floyd, we think we can safely say none of these snowflake lefties would even be calling him a murderer!” Oh man, this is so easy.

As of this writing, Shapiro’s tweet has 14,000 likes. Meanwhile an immediate response to him by Twitch video game streamer HasanAbi has TEN TIMES that with about 140k. Hasan wrote simply:

“almost like there’s a difference between a murderer going free and not.”

This isn’t the first massive self-own from the promises-he’s-not-alt-right golden boy either. You may recall last summer when he hilariously attacked Cardi B and Megan Thee Stallion‘s sexual anthem WAP by suggesting that women with such an affliction “get the medical care they require” — which, as the internet gathered, came across like he’s never experienced making anyone wet!

We’d say we can’t believe this guy has hundreds of thousands of followers, but in a country that’s just now getting around to convicting cops who kill unarmed Black folks… yeah, that sounds about right.