Home » Celebrities » What Does BTS’ Jungkook’s Flower Tattoo Mean? It May Connect To His Birthday

Over the past few months, Jungkook has been gradually revealing his tattoo collection to fans. Every few weeks, it seems ARMYs discover yet another new tattoo on him, making fans curious over the possible meaning behind it. Fans have caught glimpses of Jungkook’s arm tats in the past, but they’ve never gotten a clear picture of them until BTS dropped their "ON" music video. In one scene, fans saw JK’s new flower tattoo — one of his bigger tats — sparking a few fan theories about its symbolism. If you’re one of those fans wondering what BTS’ Jungkook’s flower tattoo means, thankfully, there are genius ARMYs who think they nailed the meaning behind it.

So far, fans have seen Jungkook sporting a variety of tats, including his fandom name ARMY, an emoji, a crossword, a skeleton hand, black stripes, and more. For every design Jungkook has, fans have a theory for it. Fans slowly discovered the tats’ through Jungkook accidentally revealing them while performing live on stage, but regarding the star’s flower artwork, fans caught the clearest glimpse of it through BTS’ second "ON" music video, released on Feb. 27.

The tattoo of a large flower with writing underneath it is seen on Jungkook’s right forearm as he’s reaching for the conch shell in the lake half way through the video. 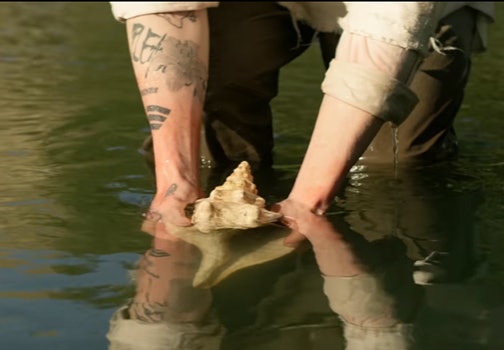 According to fans, the tattoo appears to be a tiger flower, which could represent Sept. 1, aka, Jungkook’s birthday.

According to fans, the flower is supposedly associated with the phrase, "Please love me," which could be the phrase written underneath the flower on Jungkook’s arm.

A lot of fans agree with the theory, and many have pointed out it looked like Jungkook also drew a tiger flower on his mask that was displayed in BTS’ 24/7=Serendipity exhibition in 2019.

"One of Jungkook’s tattoos is the tiger lily which is his birth month flower and also a flower he used to decorate his mask with," one fan tweeted.

"As you know, the flower tattoo on Jungkook’s forearm is ‘Tiger Flower’ which is his birth flower. Tiger flower’s flower language is ‘Please love me.’ He had also adorned his celebrated mask artwork with this flower," another fan wrote.

Apart from the flower, Jungkook also appears to have three black stripes, a skeleton hand, and the phrases "rather be dead than cool" and "make hay while the sun shines" on his right arm. Based on what fans have seen, they think Jungkook has at least 15 tattoos so far.

For now, the exact meaning of Jungkook’s designs remain a mystery, and ARMYs totally respect his decision to keep the meaning behind them private until he’s ready to open up about them. In the meantime, this theory is pretty convincing.