Home » Celebrities » Why Was Anderson Cooper Furious At His Ex Over Their Son?

Anderson Cooper welcomed his son Wyatt last April via surrogate with his ex, Benjamin Maisani. The pair split in March 2018 after 10 years together, but are raising Wyatt together. “There is no acrimony between us,” the CNN anchor told People. “Even though it’s maybe unconventional because he’s my ex, he is my family.” Cooper also talked about how his father’s death at a young age inspired him to co-parent with his ex-partner. “If there was ever something that happened to me, I would want Wyatt to be surrounded by love,” the “The Rainbow Comes and Goes” author continued.

Since the couple split three years ago, they remained in each other’s lives leading up to the birth of their son. “While we were a couple, he wasn’t sure he wanted kids, which was one of the issues we’d always had,” Cooper explained. “But when I decided, ‘I’m just going to do this,’ he started to be interested.”

Their co-parenting experience appears to be going well, but Maisani recently did something that made Cooper furious. Read on to find out what he did. 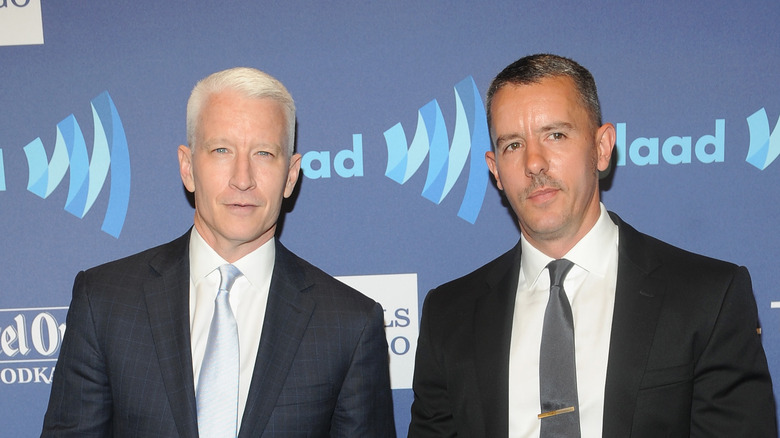 When the 54-year-old “Anderson Cooper 360” host appeared on “The Late Show with Stephen Colbert,” he revealed that he recently missed a major milestone in his son’s life. “It was my first work trip for ’60 Minutes’ and I was doing an interview and I get this text from Wyatt’s other dad, Benjamin, and he said, ‘He just walked!!'” he told Colbert (via People). “My reaction was fury.”

“I got really pissed at Benjamin,” Cooper revealed. “In my household when I grew up, you would lie about everything, so he should have just lied. He should have lied and said, ‘Oh no, he’s not walking at all,’ so when I got home and he walked, we’d be like, ‘Oh my god! It’s the first walk.'” When asked to describe the walk, Cooper said, “He walks like a drunken sailor.”

Cooper also discussed how father’s day was not a big part of his life growing up. “The pain was so great for most of my life I didn’t know Father’s Day was this date,” he explained. “And yet, the interesting thing about having a child is it’s made me sort of connect with my dad and my mom’s past and my brother’s past in a way that I never really anticipated.”

Stars and Scars — You Be the Judge