Home » Lifestyle » 10 years after the ‘icing’ drinking prank, TikTok teens are ‘oating’ each other with containers of raw oats 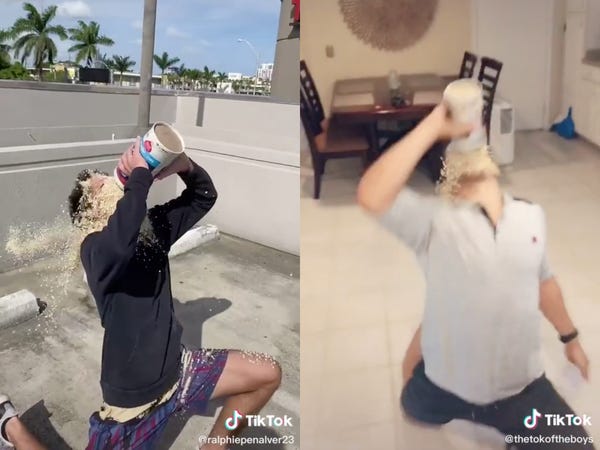 Anyone who has ever been a part of American college campus culture within the past decade has heard of "icing," the drinking game where you prank your bros by handing them a Smirnoff Ice or placing one where someone is likely to find it. Once someone gets the beverage, they have to drop to one knee and immediately chug it.

Now, the decade-old tradition has morphed into something a bit less sugary — "oating," in which you prank your bros by forcing them to encounter a full container of raw oats that they then dump onto their head and into their waiting maw.

While "oating" is a new twist on the "icing" tradition, it seems to cater to the same kind of demographic — bros pranking bros. The #oated tag on TikTok currently has approximately 11.6 million views.

'Icing' began as a fraternity trend in the early 2010s

"Icing" was — and still is — a viral drinking game that found its footing in fraternities. A New York Times report from 2010 says that while the exact origin of the trend is hard to pin down, it first grained traction at Southern fraternities. The report says that members of Pi Kappa Alpha at the College of Charleston were the first to put the rules online, posting them to Brobible.com at the time, before those rules were later reposted on the website BrosIcingBros.com, which now appears to be defunct.

From that point on, the game spread, with The Times noting that most participants were men. People hypothesized that it may have been a particularly intelligent marketing campaign, which per The New York Times, Smirnoff denied at the time. For a game that was predicated on the assumption that you had to literally be tricked into drinking a Smirnoff Ice, it would have been a particularly clever one if true.

While the fervor around the meme eventually died off in the 2010s, it never fully died down. People have posted about getting iced at their wedding in the latter half of the deacde, and anecdotally, as someone who went to college in the late 2010s, the specter of "icing" never fully left college campuses.

'Oating' appears to have first gone viral on TikTok in June

Now, on TikTok, people are "oating" their bros, hiding whole canisters of raw oats in places like ovens and coolers to trick their friends into finding them. This time, instead of chugging a beverage, you take a knee, open your mouth, and dump oats on your head.

It's unclear exactly where the trend started, but one TikTok from June appears to be one of the earliest viral instances of the trend. The video, posted by the account @thetokoftheboys, has amassed approximately 733,100 likes and 5.5 million views in the four months since it was first posted.

In the video, one man leads another to what appears to be a sticky oven. The second man easily tugs open the oven, revealing a container of oats.

"Guys, who oated me?" he says, before dropping to one knee and promptly dumping the container onto his face.

Many 'oating' videos are deeply exaggerated

While the trend seems to have first gone viral on TikTok in June, many other top videos in the #oated tag are from September and October, suggesting a fall resurgence.

Many follow the oven format, in which one person "unexpectedly" opens an oven to reveal a container of oats.

What sets this trend apart from "icing," however, is that the theatrics and meme-ified tone in many of the videos — "C'mon guys, again? Guys, who oated me?" the person in the video above says. Rather than the legitimate prank that icing has become, most oating videos are clear parody, poking fun at the frat-based "icing" of the earlier 2010s.

While it doesn't seem like "oating" is poised to have the same kind of legacy as "icing" has had across the past decade, it's another example of creators on the app parodying trends and media from a decade ago, whether that's turning songs like Iyaz's "Replay" into Rick Rolls or the transition sounds from "Hannah Montana" into a "rating things" trend.

Craig Revel-Horwood takes us inside his amazing wardrobe for the OK! Closet Clear Out Campaign

How Iggy Azalea Feels About Her Split From Playboi Carti: She’s A ‘Very Strong Woman’