As a result of the spreading coronavirus pandemic, every Disney theme park in the world is temporarily closed.

The company first shuttered Shanghai Disney Resort on January 25, and Hong Kong Disneyland followed suit the next day. Tokyo Disney Resort was next to close its doors on February 29, with Disneyland Paris and Disneyland in California doing the same on March 14. Most recently, Disney World shut down on March 16.

Though some hotels, shops, and restaurants remain open, photos of the theme parks from the last few days show how drastically Disney resorts have changed in response to the virus. 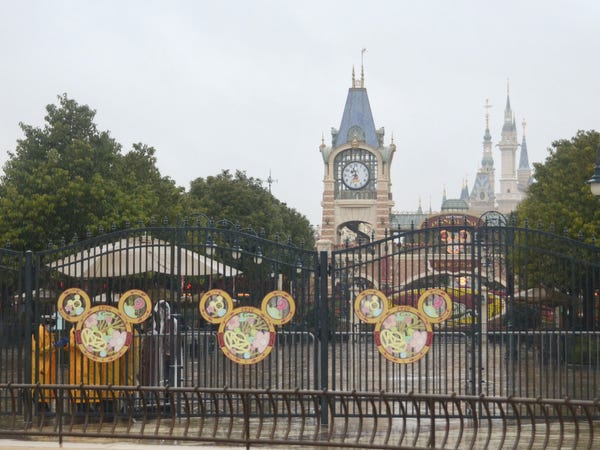 It was the first Disney theme park to close as a result of coronavirus, and remains empty almost two months later to help prevent further spread.

Some Disney-owned attractions in the area have started to reopen. 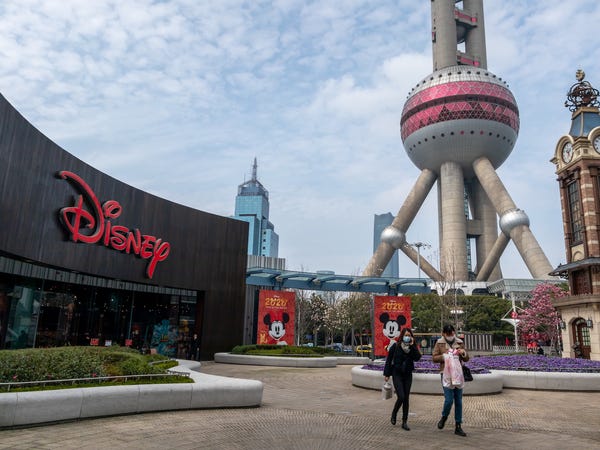 The Disney flagship store in Lujiazui, for example, reopened around March 9. Some attractions at Disneytown, Shanghai Disneyland Hotel, and Wishing Star Park also opened for business that day.

According to the theme park's website, each open attraction will operate "under limited capacity and reduced hours of operation" for the time being.

However, the reopened attractions look very different than they did just a few weeks ago. 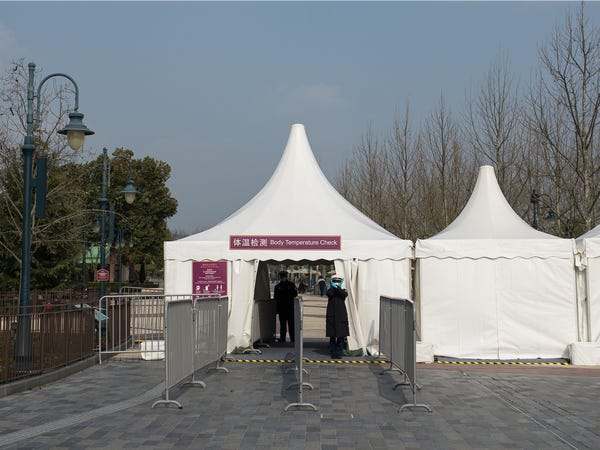 To enter the opened shopping areas and restaurants at Shanghai Disney Resort, visitors must first enter a "body temperature check" to see if they have a fever or other symptoms of coronavirus. 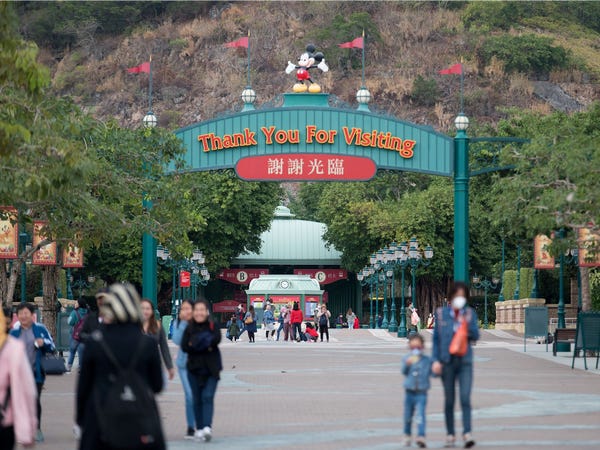 Shortly after the theme park announced that it was closing for the time being, numerous people were photographed standing outside its gates. 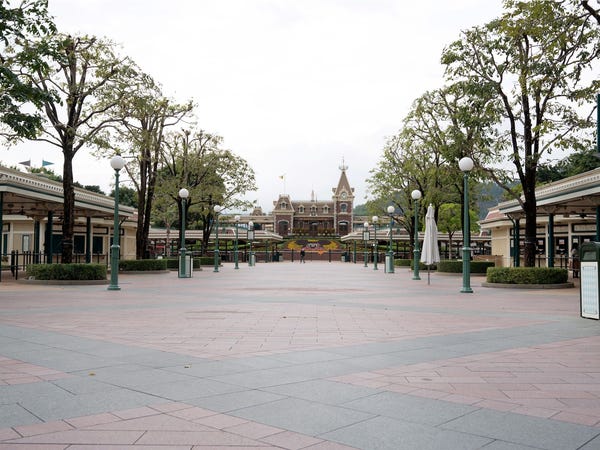 At the time of writing, Hong Kong Disneyland has a statement on its website that reads: "As a precautionary measure in line with preventive efforts taking place across Hong Kong, we are temporarily closing Hong Kong Disneyland Park out of consideration for the health and safety of our Guests and Cast Members."

"We are in close contact with health authorities and the government about the situation and will announce a reopening date once they determine it is advisable. Inspiration Lake Recreation Centre remains open as usual."

Tokyo Disney Resort was filled with visitors days before it shut down in February. 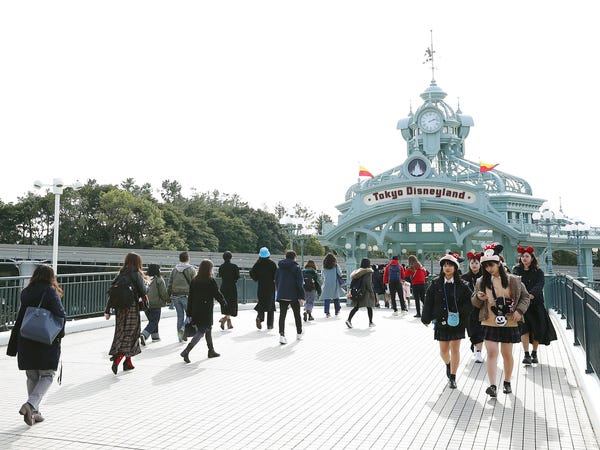 Some people chose to wear face masks in the theme park, and others opted for Disney-themed hats.

Aerial images show particularly large crowds on February 28, just one day before the park closed in response to coronavirus. 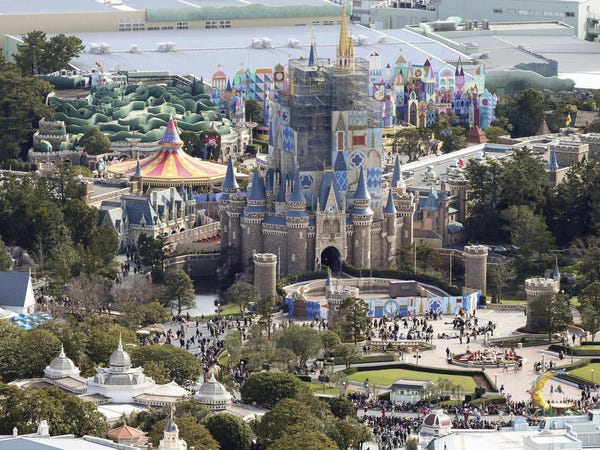 Tokyo DisneySea was also filled with visitors that day.

No humans are visible in another aerial image taken on February 29, the day Tokyo Disneyland closed.

People flocked to Disneyland Paris in early March, despite an employee testing positive for coronavirus. 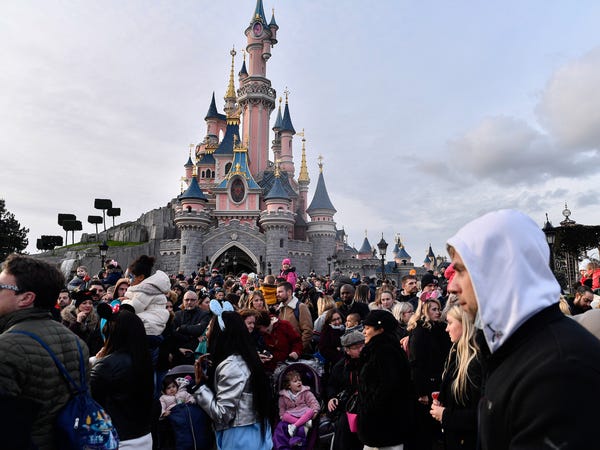 At the time, Disneyland Paris said it would remain open because the employee, or cast member, works behind the scenes and "does not have contact with guests."

Less than a week later, no one attempted to enter the French theme park. 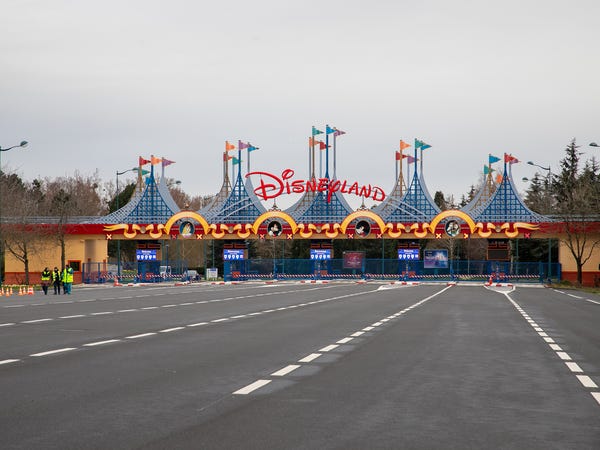 According to a statement on the Disneyland Paris website, the theme park will be closed until the end of the month. Disney-owned hotels in Paris will also shut down as soon as guests check out.

Instead, many Disneyland Paris parkgoers lined up at shops, which remained open for one extra day. 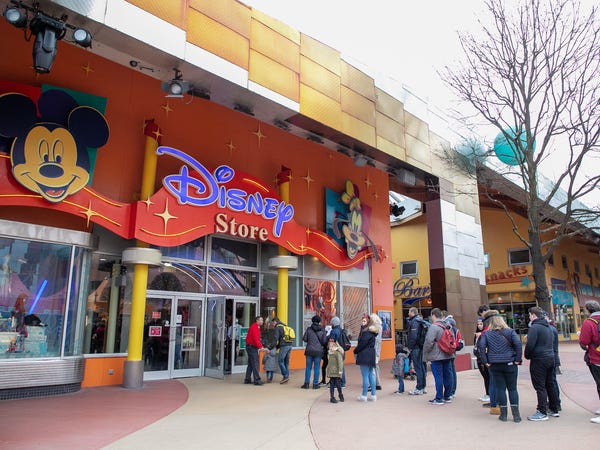 Some people wore masks while waiting for shops to open, but most just braved the crowds. Disney Village, the shopping center within Disneyland Paris, has since shut down temporarily. 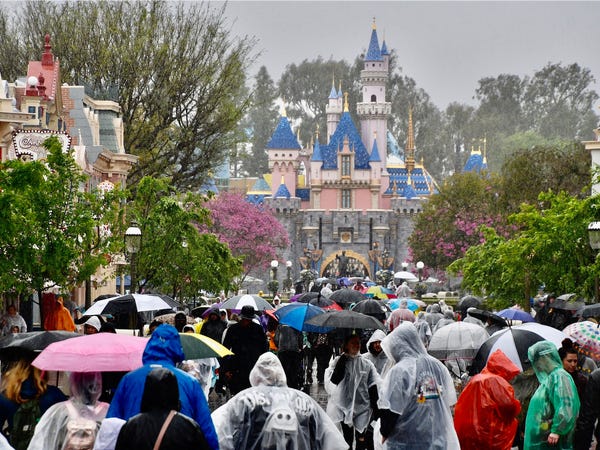 Not only was it raining on March 12 when this photograph was taken, but Disneyland had also announced at the time that the theme park would close two days later to prevent the spread of coronavirus.

While there, many parkgoers took breaks to grab some hand sanitizer. 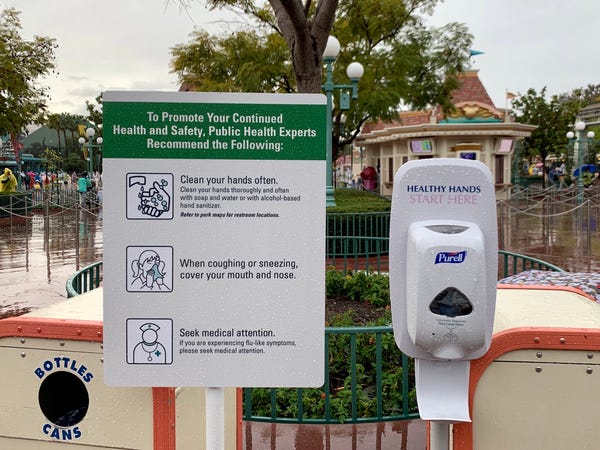 Disney theme parks in the US began placing extra hand-sanitizer stations around various attractions in early March, according to tweets from Disney blogs.

Though they couldn't get inside, people still visited Disneyland after it temporarily closed on March 14. 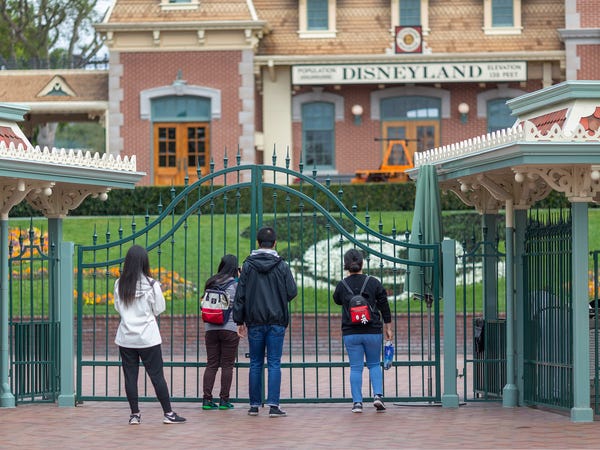 At the time of writing, Disneyland is expected to remain closed until at least March 31. 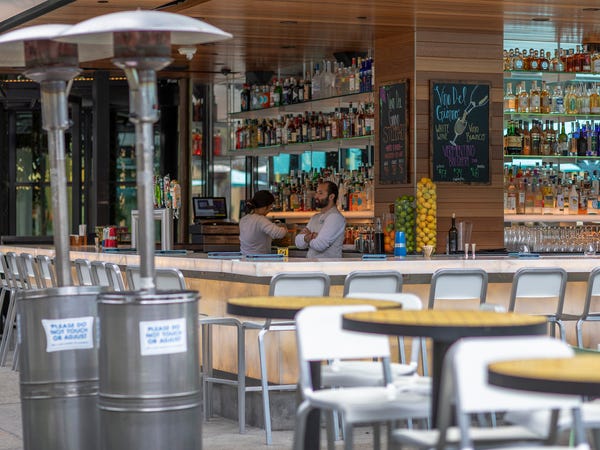 In photographs taken on March 13, restaurants in Downtown Disney appear to have been empty.

Both hotels and Downtown Disney are now closed. 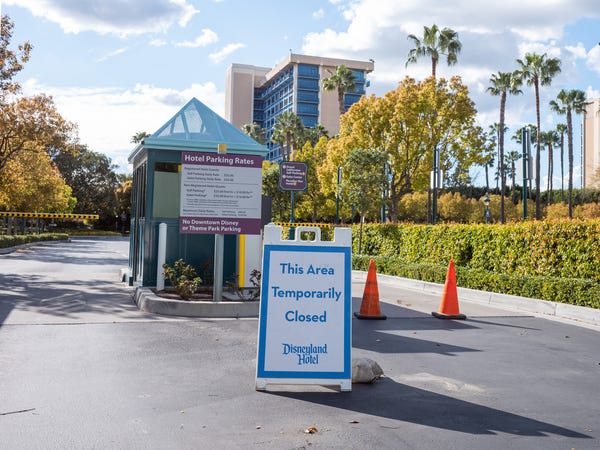 In a statement on its website, representatives for Disneyland said this about the closure: "We will continue to monitor the ongoing situation and follow the advice and guidance of federal and state officials and health agencies."

Disney World in Orlando, Florida, saw huge crowds in the middle of March. 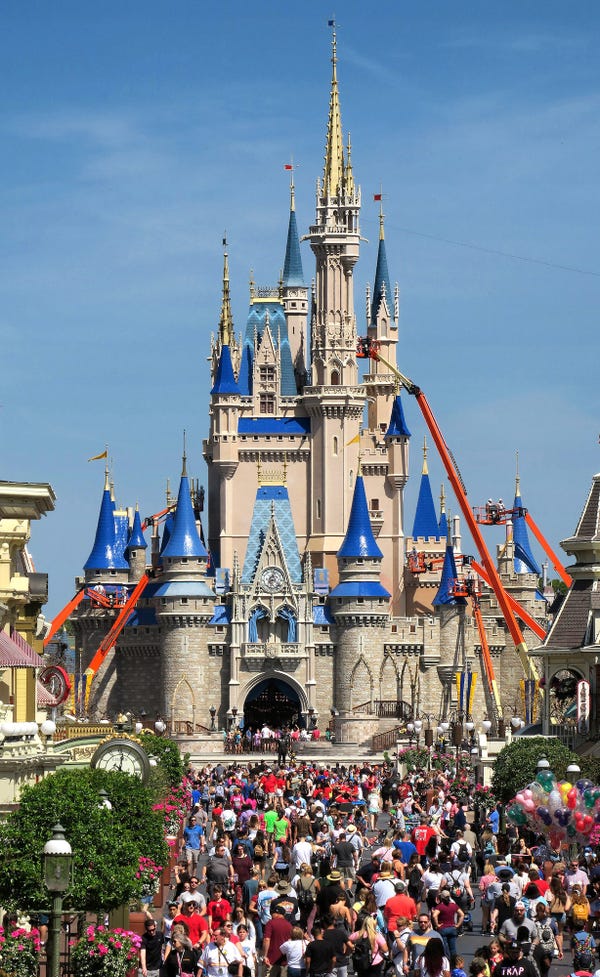 On Thursday, the day this photo was taken, Disney World announced that the Florida theme park would be closing just three days later. 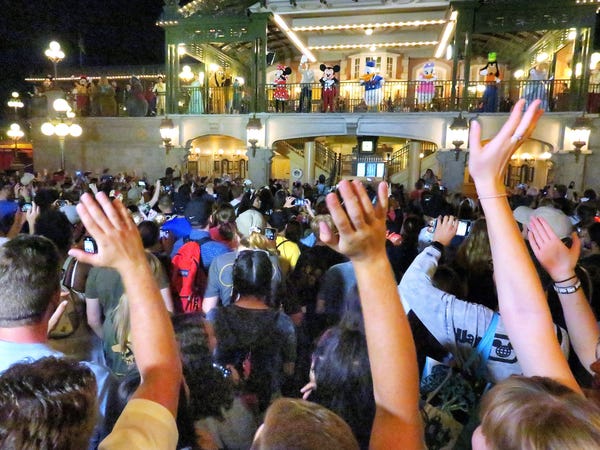 Though the theme park remained crowded all day, the biggest crowds gathered for the nighttime fireworks show, during which characters and cast members lined up to wave goodbye to parkgoers.

Today, the entire Disney World resort is empty of parkgoers. 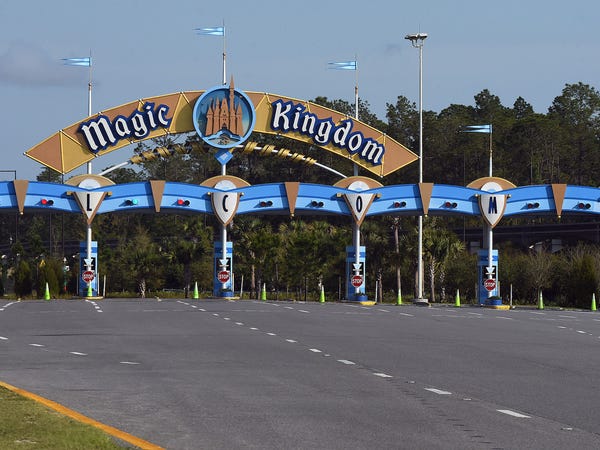 According to the theme park's website, Disney World is expected to remain closed until March 31 at least.