Home » Lifestyle » A 25-year-old Canadian isn’t content with breaking one of Ronda Rousey’s UFC records, and is also targeting the men’s record 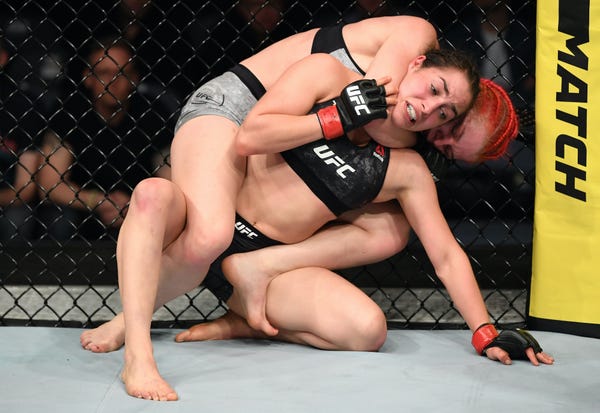 FIGHT ISLAND — A 25-year-old Canadian called Gillian Robertson isn't content with breaking a women's record previously held by Ronda Rousey in the UFC and is targeting men's records, too.

With a hat-trick of rear-naked choke submission wins, as well as a win via armbar, Robertson is fast-developing a reputation as a Brazilian jiu jitsu expert fully capable of making UFC opponents tap.

In her most recent win, a pandemic-era submission scored against Cortney Casey in June, Robertson surpassed Rose Namajunas and Rousey's shared record of most submission wins in UFC history with three apiece.

Robertson has four in the UFC, and six in her career in total, but is looking at other submission records she can break within the company — and so the Brazilian lightweight Charles Oliveira might want to start looking over his shoulder.

"To see that I broke Ronda Rousey's record was mind-blowing because I feel she's such a pioneer for women in this sport," said Robertson at a Fight Island media event which Insider attended in Abu Dhabi on Wednesday.

"So that was a huge step for me. It's really just the beginning. I look at Charles Oliveira, he has 14 [wins via submission]. I'm trying to break that record."

Robertson competes in a flyweight match against Poliana Botelho during the preliminary card broadcast Saturday on ESPN+ from the behind-closed-doors Flash Forum venue on Yas Island.

She will likely have fond memories of the trip to Fight Island as, within hours of being released from their mandatory 48-hour quarantine, she received a text message from her coach Din Thomas who said he had something to give his student — a BJJ black belt.

"It was definitely unexpected," said Robertson, as quoted by UFC.com. "It means the world to me to finally have that respect from [Thomas].

"So, now that I finally have that, it feels real."

Mutated Covid strain that is ‘spreading fast’ across UK – does the vaccine stop it?