The Australian Defence Force will struggle to meet an ambitious target of adding 18,500 personnel over the next two decades unless it overhauls recruitment, pays more competitive salaries for specialised staff and makes it easier for military families.

Defence experts say the government must be prepared to shake up its recruitment and retention policies to achieve its $38 billion plan to increase the permanent ADF ranks by 30 per cent to 80,000 by 2040. 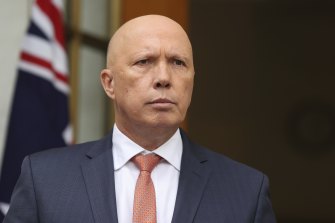 Defence Minister Peter Dutton has asked officials to look at ways to improve retention rates in the ADF.Credit:Alex Ellinghausen

Defence Minister Peter Dutton acknowledged the ADF faced a retention challenge, particularly due to the toll a service career could take on families and relationships, and said he had asked top defence officials to review the issue.

“I’m conscious of the impact on predominantly mothers [and] wives in that arrangement, where a generation ago it might have been ok to ask the family and to move them to a new location every two or three years,” Mr Dutton said on Thursday.

“But in the modern age, we’ve got to be conscious of the career of both people within that relationship. I’ve asked Defence to look at ways in which we can stabilise that workforce so that people can pursue their respective careers so that their children can have greater stability.”

Since the Coalition came to power in 2013, the ADF has missed its cumulative recruitment targets by 2510 personnel, annual reports show. The closest it came was in 2015-16 when it fell short by just eight personnel while the largest shortfalls have been over the past two financial years.

Last financial year, the ADF missed its target for the army – its largest arm – by almost 900 people but beat its navy target by almost 400.

Former army head Peter Leahy said the expansion plan was achievable, but the government had to improve family-friendly policies and be prepared to match market rates to ensure experts in sought-after fields such as cybersecurity weren’t poached by the private sector.

“I think they’ve got to change some of their practices and reward people for their skills rather than their rank. If you want people, you’re going to have to pay for them,” Professor Leahy said.

He said other incentives such as covering education and training expenses after a minimum period of service, which had worked well in the United States and Israel, should also be considered.

“I reckon a lot of young people would say, well, I’ll do four or six years in the military and then they’ll pay for me to go to university.”

Former Defence Force chief Admiral Chris Barrie was sceptical the boost could be achieved without a major rethink, saying the ADF had struggled to boost numbers despite considerable investment in recruitment drives and efforts to improve conditions.

“It means, of course, we sometimes have serious shortfalls, particularly in areas of high qualification and high skill sets.”

He said the pressure of service life on families was a “significant issue” and contributed to a lot of marriage and relationship breakdowns.

Labor said it agreed with increasing the ADF but doubted the government’s capacity to deliver it.

“They only met 90 per cent of permanent force recruitment targets in 2020-21 and have failed to meet 2016 Defence white paper targets every year since 2015-16,” Labor defence spokesman Brendan O’Connor said.