Babies who consistently struggle to sleep are more likely to experience and anxiety and emotional issues during childhood, an Australian study has found.

The research, published in the BMJ's Archives of Disease in Childhood on Tuesday, found babies with severe sleep difficulties were three times more likely to be reported by their mothers as displaying signs of emotional problems and anxiety at the age of four than babies who were settled as infants. 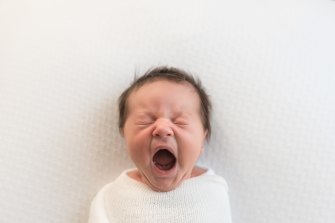 Babies with severe sleep difficulties were also twice as likely to meet the diagnostic criteria for an emotional disorder at age 10, notably separation anxiety or general anxiety.

"Because a lot of these babies have persistent sleep problems, they often have trouble separating from the parent at bedtime, which does make us wonder if there is some separation anxiety coming up in infancy which persists," said Dr Fallon Cook, from the Murdoch Children's Research Institute, who led the study.

"These [babies] are the ones who are really struggling to settle, where their parents are rocking them for over an hour," explained Dr Cook.

Researchers used longitudinal survey data from 982 Melbourne first-time mothers who gave birth in public hospitals and answered questions about their child's sleep patterns throughout their infancy, and emotional wellbeing aged four and 10.

Dr Cook said it was important to note the majority of children reported as having sleep problems as infants did not develop emotional disorders – for example, although they were twice as likely to have separation anxiety as their peers who had settled by 12 months, only 21 per cent of children who had experienced sleep issues showed signs of this behaviour at 10 years old.

Dr Cook said she did not want parents to be "alarmed" by the findings if their child struggled to settle.

"We are more viewing this as a group who are of increased risk. So now we can ask, how can we best intervene?" she said.

A number of local and international studies have shown the detrimental impact poor infant sleep can have on the emotional wellbeing of parents. In another study of Melbourne mothers, published in 2006, persistent cry-fuss and sleep problems in a child's first two years of life were linked to maternal depression and stress.

Professor Cathrine Fowler, chair for child and family health at Tresillian clinics, said anxiety experienced by parents and children during periods of sleep disturbance could be "a bit chicken and egg".

"If the sleep issues are caused by other issues in the mother or primary caregiver's life, the baby is going to be unsettled because they pick up on that anxiety," she said. "But if the baby is unsettled to start with, the mum then has a real challenge ahead of her to settle that baby and she can become distressed."

Nia Ellis "thought it was normal to feel on the edge of madness" as she looked after her daughter, who had a number of health issues and did not sleep through the night until the age of four.

"It was a bit like trying to keep all the saucepans boiling at the same time," said the Diamond Creek woman. "I don't know what I would have been like to speak to; I was so stressed and embarrassed and I couldn't cope."

After giving birth to her second child, who slept through the night, she realised what she was experiencing warranted professional help and was prescribed antidepressants.

"I didn't realise what I needed. I didn't realise it stemmed from my daughter's sleep deprivation and mine, as I ran around the house trying to do 54 things which I couldn't do when she was awake because she was such a needy baby."

Ms Ellis said her daughter was now a "perfectly happy" 14-year-old: "I feel like I survived it, so she survived it."

Clinical psychologist Dr Nicole Highet, founder and executive director of the Centre of Perinatal Excellence (COPE), said there were "so many other factors that contribute to children developing anxiety and depression problems, including the emotional disposition of the parents themselves".

"At the end of the day, [parents] can't really do anything about their child's ability to sleep in the first 12 months, it's just about managing your own anxiety, and role modelling that for your children."

Dr Cook encouraged concerned parents to reach out to a GP for local specialist recommendations if they were struggling. "When the baby sleeps well everyone sleeps well."

Post Malone’s New Rosé Is Good, According to My Mother