Australia’s government has dropped its biggest hint yet to the independent pay umpire that it should lift wages for more than two million workers when it decides on the next minimum wage rise.

Treasurer Josh Frydenberg and Industrial Relations Minister Michaelia Cash have told Australia’s minimum wage-setting panel the economy is improving fast in a signal that could underpin a pay rise for low-income workers.

Tuesday’s budget started a political battle on wages when Labor and the Greens highlighted its forecast that wages would fall or be flat in real terms until 2024, drawing focus to this year’s minimum wage decision due next month. 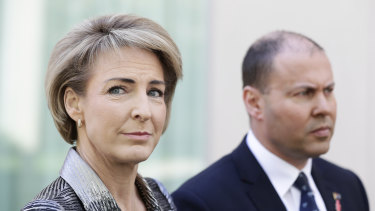 Big employer groups, including the Australian Chamber of Commerce and Industry, have urged the panel to keep the minimum wage flat in real terms on the basis that the coronavirus is still hurting businesses, especially in sectors like tourism. That would affect 2.3 million workers on the minimum wage, or others tied to it.

But in a letter to the panel, which is independent but contains several government appointees, Mr Frydenberg and Senator Cash emphasise how well the economy is performing.

They cite forecast GDP growth of 1.25 per cent this year, 4.25 per cent next year and 2.5 the year after coming from all sectors of the economy from household spending, house prices and businesses investing.

“Given the scale of improvement in economic conditions this update is of particular significance for the panel,” the ministers write. According to tradition, the government does not say what it wants the minimum wage to be directly but its letter undercuts employers’ warnings of weaknesses in business conditions.

Australian Council of Trade Unions secretary Sally McManus had written to the government on Thursday, asking the Prime Minister to endorse the unions’ wage demand. Australia’s minimum wage stands at $19.84 an hour or $753.80 a week and the unions want a 3.5 per cent increase to take it to $20.53 an hour or $780.18 weekly.

In an unusually candid submission to the panel, the national business chamber said this year’s decision was particularly hard because the economy was both “roaring back to life” as Mr Frydenberg said on Budget night but was doing much worse in some areas.

It suggested a 1.1 per cent lift, the same as the inflation rate, plus the legislated 0.5 per cent super rise with delayed start dates for struggling sectors.

Ai Group, another business lobby organisation, made the same suggestion. Its boss Innes Willox said some businesses would “lock the door and walk away” if they were required to pay much higher wages.

The Australian Retailers Association said any decision on the minimum wage should be delayed until 30 November, when the Australian Bureau of Statistics will have released more economic data.