Australia emits only about one per cent of all greenhouse gases but could equip the world for cutting a further 7 per cent of all global emissions, creating an economic boom in the process, according to an eminent economist.

Melbourne University’s Ross Garnaut says “Australia is better placed than any other country” to prosper from the energy transition now under way, with the potential to turn from global laggard to global leader. 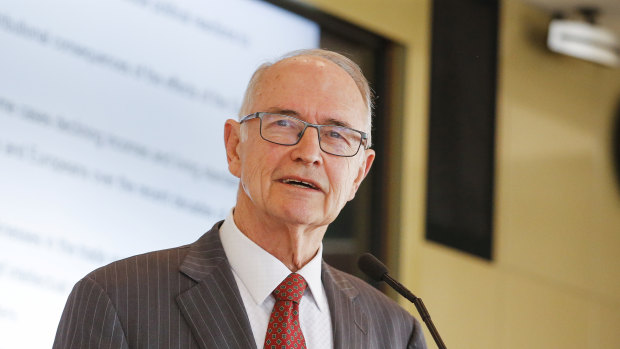 In a keynote address to the jobs and skills summit in Canberra, Professor Garnaut said Australia’s economic funk was much worse than generally understood, but so was its potential for economic rejuvenation.

The global energy transition was a transformative economic opportunity for Australia and a potential boost to global decarbonisation, he said.

“Australian export of zero emissions goods and services could reduce global emissions directly by about 7 per cent.

“This would cover much of the hardest and costliest decarbonisation in the rest of the world. This is in addition to the one and a quarter per cent of global emissions removed by Australia itself going to net zero.”

Australia has five “crucial advantages” in achieving the post-carbon economy, said the economic adviser to then-prime minister Bob Hawke at the time of the 1983 economic summit, and the author of the Garnaut climate review for the Rudd government.

It has the best combinations of solar and wind resources in the developed world, he said, which should generate the world’s cheapest energy; it is the world’s biggest exporter of ores that need energy-intensive smelting; it has an abundance of the critical minerals for the machinery of the zero carbon world; the largest endowments per person of land suitable for making biomass and sequestering carbon; and key knowledge that could be translated from the mining and farming sectors.

“Twice in Australia’s history we have faced large challenges, dealt with them and, in dealing with them, we have laid the foundation for several decades of prosperity – we have that chance now,” he told The Sydney Morning Herald and The Age.

But it would require vast investment, equal to about 5.5 per cent of GDP annually till the mid-2050s. In today’s dollars that would mean about $130 billion in new investment. Yet this was within the range of the investment that went into the mining industry during the China boom, he said.

“Most of the new development would be in rural and provincial Australia. Much of the solar, wind and storage developments would require Indigenous support and in some cases leadership,” Garnaut said.

Australia transformed during reconstruction in the 1940s after World War II, which was followed by a quarter-century of full employment and rising incomes, and again in the reform era ushered in by the Hawke government from 1983 that “set us up” for the longest economic boom “ever in any developed country”.

He said major reform was essential and Australians were “kidding ourselves about the extent of the problems”. The federal debt was “eye-watering” and “we have large deficits when our high terms of trade should be driving surpluses,” he said.

“We talk about the most difficult geo-strategic environment since the 1940s requiring much higher defence expenditure, but not about higher taxes to pay for it.” Likewise, there was not enough revenue to support necessary boosts to wages for teachers and nurses.

“In the face of these immense budget challenges, total Federal and State taxation revenue as a share of GDP is 5.7 percentage points lower than the developed country average.”

“Some of your predecessors faced challenges of similar dimension, and left our country vulnerable by avoiding them,” he said. “Others stood up to the challenges and set the country up for long periods of success.”

How to get rid of visceral fat: Fitness expert shares seven ways to burn more by walking

All the Celebrities Giving Back Throughout the Coronavirus Epidemic