Look, Weber has had quite a week. After issuing a statement that he'd split from Madison Prewett—the contestant he started dating after breaking off his engagement with Hannah Ann Sluss—he's had to deal with the drama surrounding both break-ups. On top of all that, rumors have been circulating that Weber's relationship with his mother Barb has been "damaged" due to the events of the After the Final Rose ceremony. On Saturday, the pilot took to his Instagram Stories to put one rumor to rest while posting a few other videos that let fans in on his state of mind. Apparently, he's feeling good enough to sing Kygo's "Happy Now" at the top of his lungs.

On Friday, March 13, Weber first posted a video of himself hanging out with his mom, despite reports that their relationship is strained. He read the headline aloud, before asking for his mom's comment. "I love you," she responded. The pilot then claimed his dog is calling these reports "fake news."

Side note: Bachelor producer Julie LaPlaca cleared up another rumor about Weber on Instagram that same day. “Yes that was @pilot_pete in the tan jacket, no we didn’t kiss at midnight," she wrote in the caption of a new photo, referring to the post that started the speculation back in January. "But, whoever ends up as his copilot for life is one lucky lady, because this guy has a heart of gold," she added, confirming that they are still not seeing each other.

But back to Weber's own posts. A while after the stories featuring his parents, he shared a few more videos of himself singing and dancing to the Kygo song "Happy Now" with some friends. 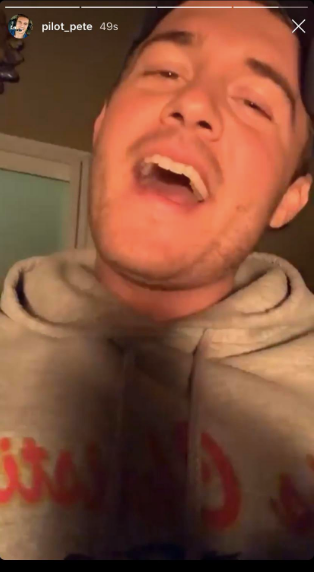 The song may be a veiled reference to his relationship with Prewett. "You and me, it was good, but it wasn't right/And it'll be hard, but I know I will make it out/Step by step, I'll move on and get on with life," is just one relevant lyric he sang out. Still, he's probably just feeling all kinds of relief now that his season is over. Prewett seems fine too, btw, and was recently spotted in Selena Gomez's own Instagram Stories since the breakup.

All this begs the question: what would Bachelor Nation do without social media?

Too Hot To Handle: Inside the incredible £12,000 a night Mexican villa where the popular Netflix show takes place

Everything you need to know about winter surfing in the UK