Barnaby Joyce has been elected leader of the Nationals in a tumultuous party spill that restores him to the position of Deputy Prime Minister after he prevailed against Michael McCormack.

Mr Joyce defeated Michael McCormack in a party room ballot that concluded shortly before 11.30 am on Monday, one hour after the Nationals met to end days of speculation about their leadership. 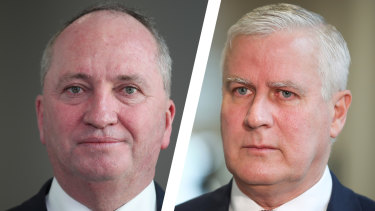 The outcome is likely to harden the party’s position against further action on climate change out of concern in the party room that the Nationals were not pushing strongly against Prime Minister Scott Morrison’s talk of reaching net zero emissions by 2050.

Worried that the Nationals were not being heard inside the Coalition, some of the Nationals shifted to Mr Joyce in order to return to a more aggressive style of leadership.

Nationals were also unimpressed with Mr McCormack’s performance in Parliament last week when he was Acting Prime Minister during Mr Morrison’s visit to Europe for the G7 summit and other meetings.

While Mr Joyce has been named party leader, he is yet to be sworn in as a minister and Deputy Prime Minister or reach a formal Coalition agreement as the new leader with Mr Morrison.

Mr Joyce will not sit as Acting Prime Minister in Parliament because Mr Morrison has returned to Australia and will lead the government in question time, albeit by video while he is in quarantine at The Lodge.

Nationals MP Damian Drum announced the change after the meeting saying the Nationals were “the most democratic party in Australia”.

Mr Joyce will hold a press conference later on Monday.

Sebastine Ikahihifo stays at Salford in loan deal for 2021