Ben Affleck knows you probably think he’s a mess. But, with a little bit of honesty, he’s hoping to change that.

Over the last few years, the Oscar winner has faced a stretch of unsavory headlines revolving around his divorce from Jennifer Garner, his run as Batman (see: the “Sad Affleck” meme) and a Me Too scandal. He’s been in and out of rehab for alcohol addiction and suffered a relapse last October that was, unfortunately, caught on camera.

Interestingly enough, Affleck’s new film, “The Way Back,” provides a nice avenue for the actor to ingratiate himself with audiences. In the film, Jack Cunningham (Affleck) is a high school basketball star turned construction worker who is soon hired by his former school to coach a ragtag team of teens. Like Affleck, Cunningham is an alcoholic who is separated from a woman (Janina Gavankar) who still deeply cares for him but can’t stay in their marriage any longer. He drinks in solitude from morning to night, attempting to hide his destructive nature and tremendous anguish.

“The Way Back” gives Affleck — who went directly from rehab to set — the opportunity to neatly address his personal struggles at a time when his likability factor is in need of a boost. In effect, his team turned its PR strategy all the way up during the media tour, proving a comeback is still very much an option for a sincere white man of a certain standing in Hollywood.

“Pulling people into the subject matter of the movie is very smart,” iHeartRadio host and former publicist Rob Shuter, who represented Jennifer Lopez during her 2004 split from Affleck, told HuffPost. “Ben isn’t just acting in this film, he is confronting his demons. The only way to promote a movie like this and seem genuine is to tell the whole truth, which is exactly what he is doing.” 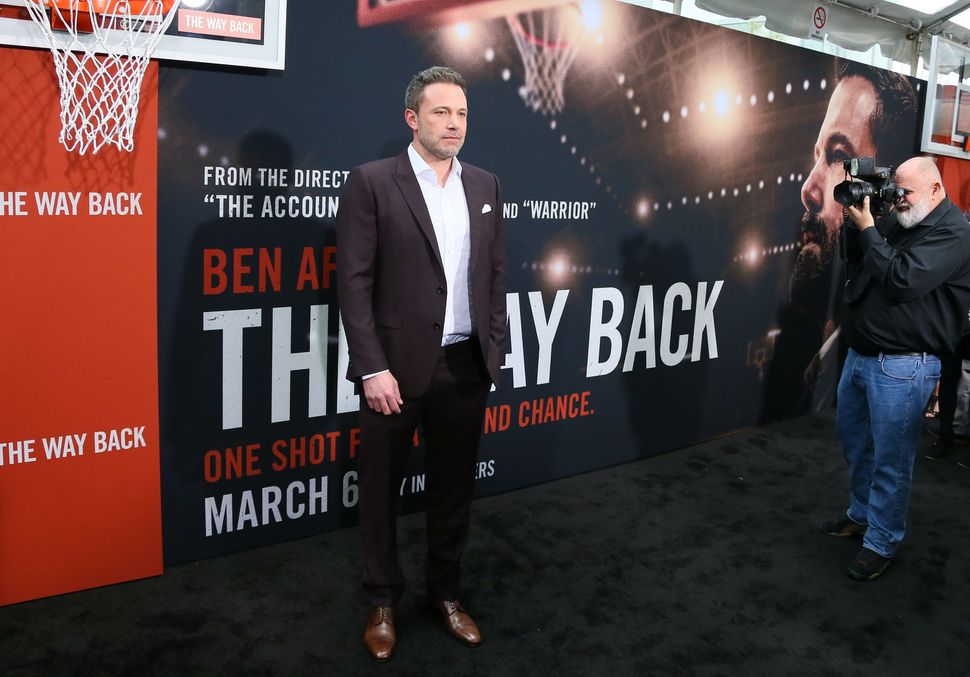 In a New York Times profile, interviewer Brooks Barnes said Affleck was “raw and vulnerable, talking extensively for the first time about getting sober (again) and trying to recalibrate his career (again).” He presented himself as a single father who just wants to be there for his three children and as an alcoholic who’s struggled for years to outrun his family’s history with anxiety and depression. Affleck told Barnes that discomfort enabled his compulsive drinking, and the dissolution of his relationship with Garner only made matters worse. He even went so far as to describe their divorce as his “biggest regret.”

Although he expressed disappointment in himself, Affleck asserted that he must look past the shame.

“It’s not particularly healthy for me to obsess over the failures — the relapses — and beat myself up,” he told Barnes, slowly exhaling. “I have certainly made mistakes. I have certainly done things that I regret. But you’ve got to pick yourself up, learn from it, learn some more, try to move forward.”

For Affleck to go public with this emotional turmoil only fuels that comeback arc his PR machine is trying to pave. His honesty is illuminating, and not only earns him sympathy, but also frames him as a man on the mend.

Affleck is not the only male celebrity who’s been praised for speaking candidly about his issues. Most recently, Brad Pitt, who also faced a lull in his career following a reportedly contentious split from Angelina Jolie, has enjoyed a full-on redemption in the years since, beginning with an eye-opening interview with GQ in 2017 in which he admitted to his “calamitous” drinking habits and desire to be a better man.

“He felt like he had to explain himself,” Michael Paterniti, who wrote the GQ cover story, told The Washington Post. Paterniti mentioned there was no publicist in the room for their interview and that Pitt agreed to address any topic. “It was his way of acknowledging that his behavior was not commensurate with who he wanted to be as a person … It felt like he had to reset the conversation around himself.”

Pitt soon secured career-defining roles in James Gray’s space epic “Ad Astra” and Quentin Tarantino’s Manson murders drama “Once Upon A Time In Hollywood,” the latter of which earned him multiple accolades, including an Oscar for Best Supporting Actor. In his acceptance speeches, Pitt displayed self-awareness, with his time on stage becoming the highlight of almost every award show in the 2020 season.

“Let’s be honest, [Cliff Booth] was a difficult part,” Pitt joked at the Screen Actors Guild Awards. “A guy who gets high, takes his shirt off and doesn’t get on with his wife. It was a big stretch.”

Mere moments later, he watched ex-wife Jennifer Aniston receive her own award, greeting her backstage with some friendly hand-holding. Pitt, however, reached a new frontier. No longer was he seen as the prick who allegedly cheated on America’s Sweetheart with a “rebellious” Jolie or a father with a bad temper. He was vulnerable and real. And, therefore, forgiven.

According to celebrity and crisis management publicist Jonathan Hay, the general public wants to hear the truth, and any insight these “normally closed-off celebrities” can share will usually sway opinions.

“Honesty only works if we care about the person,” Shuter added. “Ben and Brad have been in our lives for so long we think we know them. A comeback only works when we want the actor to rise up.”

In comparison, Bradley Cooper chose not to mention his own struggle with addiction when promoting “A Star Is Born,” in which he plays a pill-popping, whiskey-drinking folk-rock star. He’d addressed his alcoholism years ago, before he “needed” a comeback. And even through multiple breakups, his personal life didn’t overshadow his career. 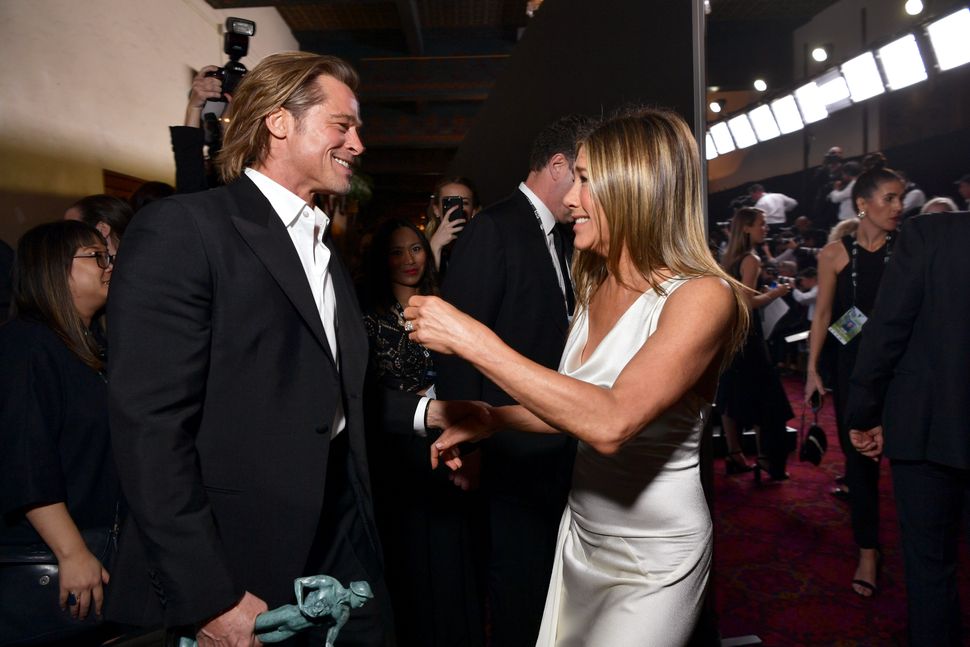 When looking at a case like Affleck’s, there’s an upside to transparency. However controlled and packaged, it led to positive media coverage for him and solid reviews for “The Way Back.” (It also led to a decent amount of people heading to germ-infested cinemas to see a melodramatic sports movie amid the coronavirus outbreak.) According to critics, the role is a career-best for Affleck.

“Affleck handles his self-conscious task with a generous humility — giving a performance built not out of histrionics or big actor moments, but instead from the messy details of a man in a plateaued distress, who has found a way to just barely function in the world and then disappear each night,” Vanity Fair’s Richard Lawson writes. “It’s a performance that suggests the most interesting stretch of Affleck’s career as an actor is still to come,” adds Vulture’s Alison Willmore.

Affleck has advanced the quest to revamp his image. Or, at the very least, people are paying attention to him again.

This arc of sorts seems to be available to famous men and not so much an option for the women adjacent to them whose lives and reputations have been similarly harmed. As Affleck is in production on “The Last Duel,” which he co-wrote and stars in with best bud Matt Damon, and Pitt’s Plan B Entertainment production company is heading up buzz-worthy projects like “Blonde,” “Minari” and “Kajillionaire,” the same can’t be said for their ex-wives. These men get to come back gloriously by way of raw honesty, and sadly, it feels that energy only exists for Jennifer Garner and Angelina Jolie as caretakers. 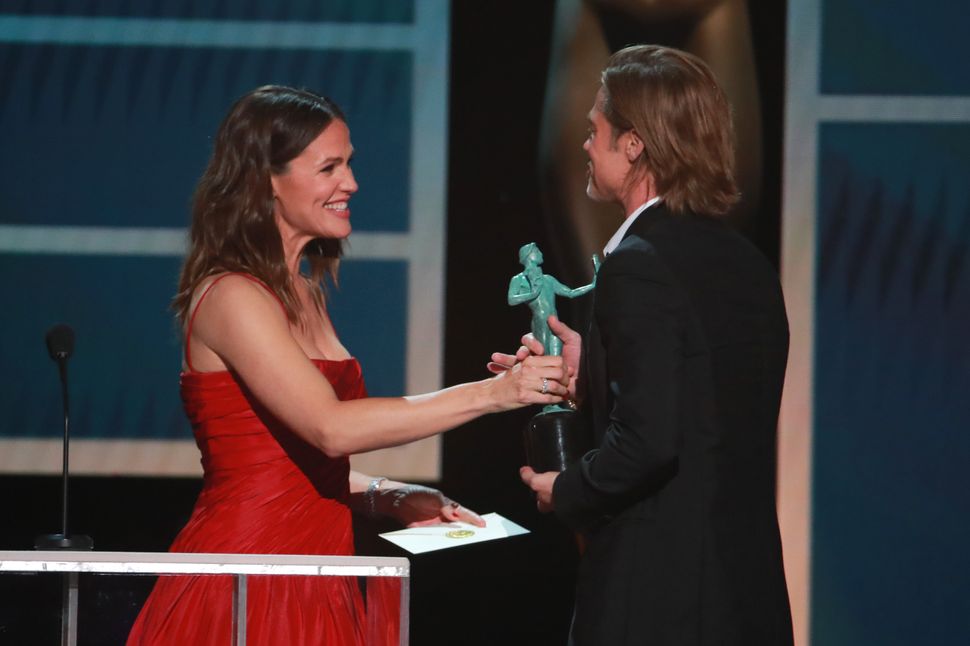 Although she’s a beaming ray of sunshine on Instagram, Garner hasn’t had many recent on-screen roles, especially ones that beget meaty New York Times profiles. Jolie has also largely stayed out of the spotlight in the last few years, though she did star in 2019’s “Maleficent” sequel and is set to appear in “Wish Me Dead” and Marvel’s star-studded “Eternals.” They both receive more attention for their roles as” devoted mother” or even “supportive ex” than they do for their acting.

Dr. Jane Greer, who is an expert on marriage, family and relationships, said that the woman’s career taking a hit is par for the course.

“Male celebrities, and men in general, usually have more resources to help support them in the aftermath of a divorce,” she told HuffPost. “They have the finances to play with and more available time since they are not saddled with the full-time responsibility and hands-on care of the children. Consequently, they have a lot more freedom to pursue work options, a new relationship and do what they like.”

Affleck does share joint physical and legal custody of his children with Garner, who has said co-parenting is about being a team. He also told Parade he stacks work commitments into four days so he can devote the remaining three days solely to his children. Pitt and Jolie are continually working through a divorce settlement.

Still, it’s no revelation that when it comes to celebrity couple scandals, the woman’s reputation is more likely to suffer long-term than the man’s. (See: “Bennifer.”)

“Life is easier if you are a white man, and the rule also applies to movie stars,” Shuter said. “The public is much more likely to forgive a man who cheats and messed up than a woman. Life isn’t fair, and neither is Hollywood.”

How much this reality will help rehab Affleck’s career and public image still remains to be seen. In Affleck’s own words, there’s nothing “heroic” about an alcoholic battling a mirror image of his real-life struggles on screen. Others may see it differently.

Where the 'Jersey Shore' Cast Sees Themselves in 10 Years