On the mend! Ben Higgins is recovering after he underwent knee surgery — and received plenty of love from fellow Bachelor Nation members as he continues healing.

“Absolutely thriving. Dinner and dessert,” the former Bachelor, 32, captioned an Instagram photo from his hospital bed on Tuesday, September 7, as he snacked on Goldfish and animal crackers. “Update number 1: thanks for thinking of me today! ACL replaced, MCL was worse than expected so it had to be fully repaired and meniscus is as bouncy and cushion like as ever!”

His fiancée, Jessica Clarke, previously asked her social media followers to “say a little prayer for my bean” as he got ready for the procedure. “He’s all prepped for an ACL, MCL and meniscus repair,” she wrote in an Instagram Story upload on Tuesday. 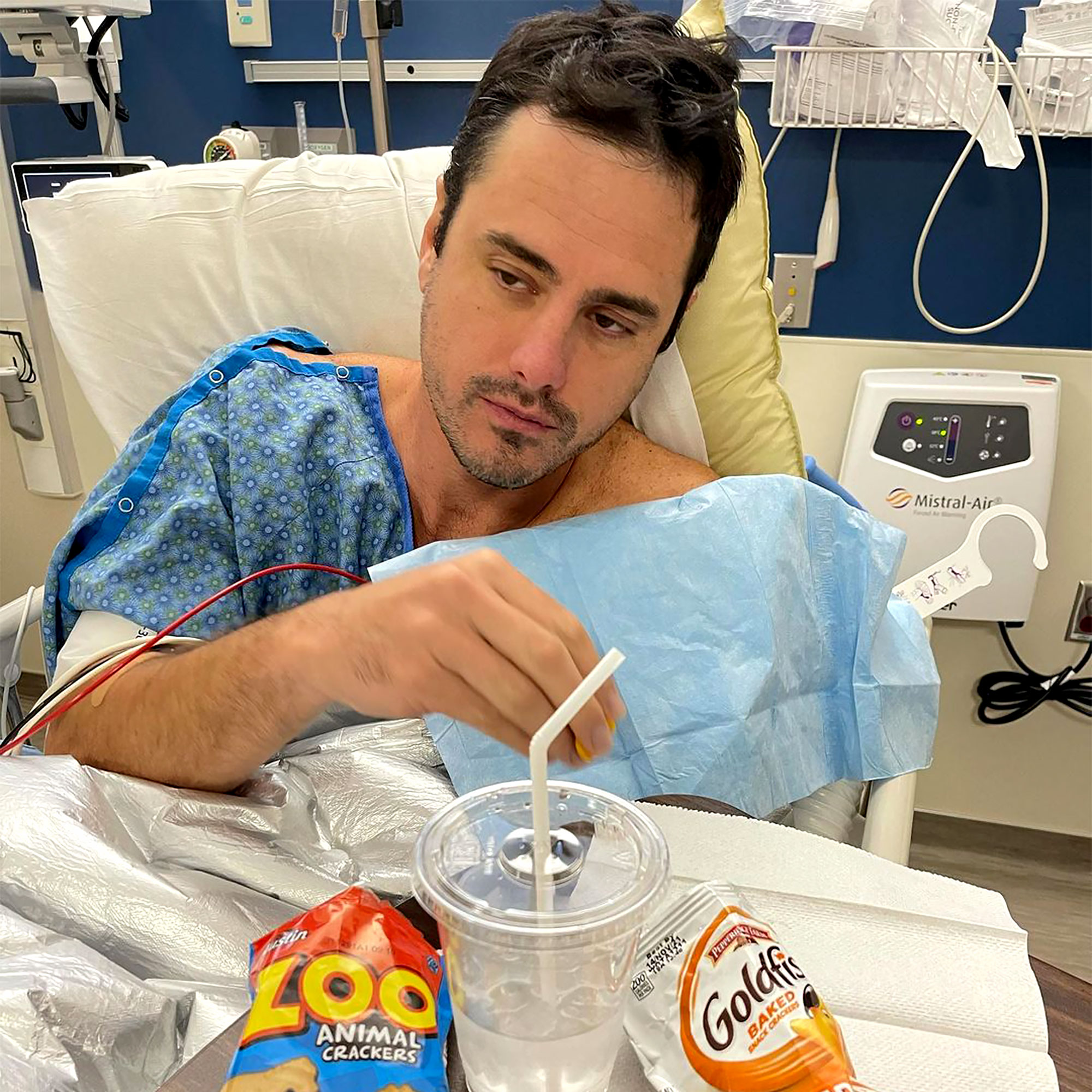 Higgins reposted her message hours later, adding, “Out of surgery! All went well.”

The Indiana native received plenty of supportive messages from both friends and fans. “Great news 👊🏼,” Bachelor Nation’s Shawn Booth commented. “But bad news for all the fellas in the ‘over 30’ basketball leagues around the country.”

Blake Horstmann noted, “Get well man! Glad it was a success!” while Derek Peth teased, “Looking like a million…cents!”

Clarke, 25, praised her future husband’s strength through the grueling process. “The face of a champion,” she joked in the comments. “And meal of an elite athlete.”

The Alone in Plain Sight author has faced several challenges in the past few months, revealing earlier this year that he moved back to his home state after experiencing a “breakdown.” During a July episode of Trista Sutter‘s “Better Etc.” podcast, Higgins went into detail about how being on reality TV impacted his mental health.

Kaitlyn Bristowe’s Season 11 of ‘The Bachelorette’: Where Are They Now?

“I don’t know what this next season of life looks like for me,” he said at the time. “I’m farther and farther removed from the show, and at the same time, I need to figure out what my life is going to look like and what my legacy is going to be.”

Several weeks later, the season 11 Bachelorette alum updated his Twitter followers on his progress as he continued to put his mental wellness first.

“Over the last few weeks based on the recommendation and love from those close to me I have been taking time to let my mind rest and heal,” he wrote in July. “If life allows you the opportunity I recommend doing the same in whatever capacity and avenue you believe is best. You deserve it.”

Stars Who Got Engaged Amid the Coronavirus Pandemic

Through it all, Clarke has been a rock for the “Almost Famous” podcast host. The pair got engaged in March 2020 and plan to tie the knot later this year. As their big day approaches, the duo won’t be living together — or having sex — until after they exchange vows.

“It’s something we decided to do early on in our relationship,” he told Insider in May. “We knew this relationship was going in the direction to be together forever, and we were like, ‘Let’s hold some things for marriage that we can look forward to.’ … We talked it through and we stuck with it. It’s a commitment we made to each other and, no matter how long the wedding gets pushed back, that’s something we’re still going to try to do.”

Best Coolers to Chill Your Drinks This Fourth of July