THERE’S nothing quite like feeling the wind in your hair and the sun on your face as you embark on a bike adventure.

And there’s no reason for the fun to stop when you have a family; the best child bike seats help kids get in on the action, allowing them to safely and easily sidekick on your two-wheeled expeditions. 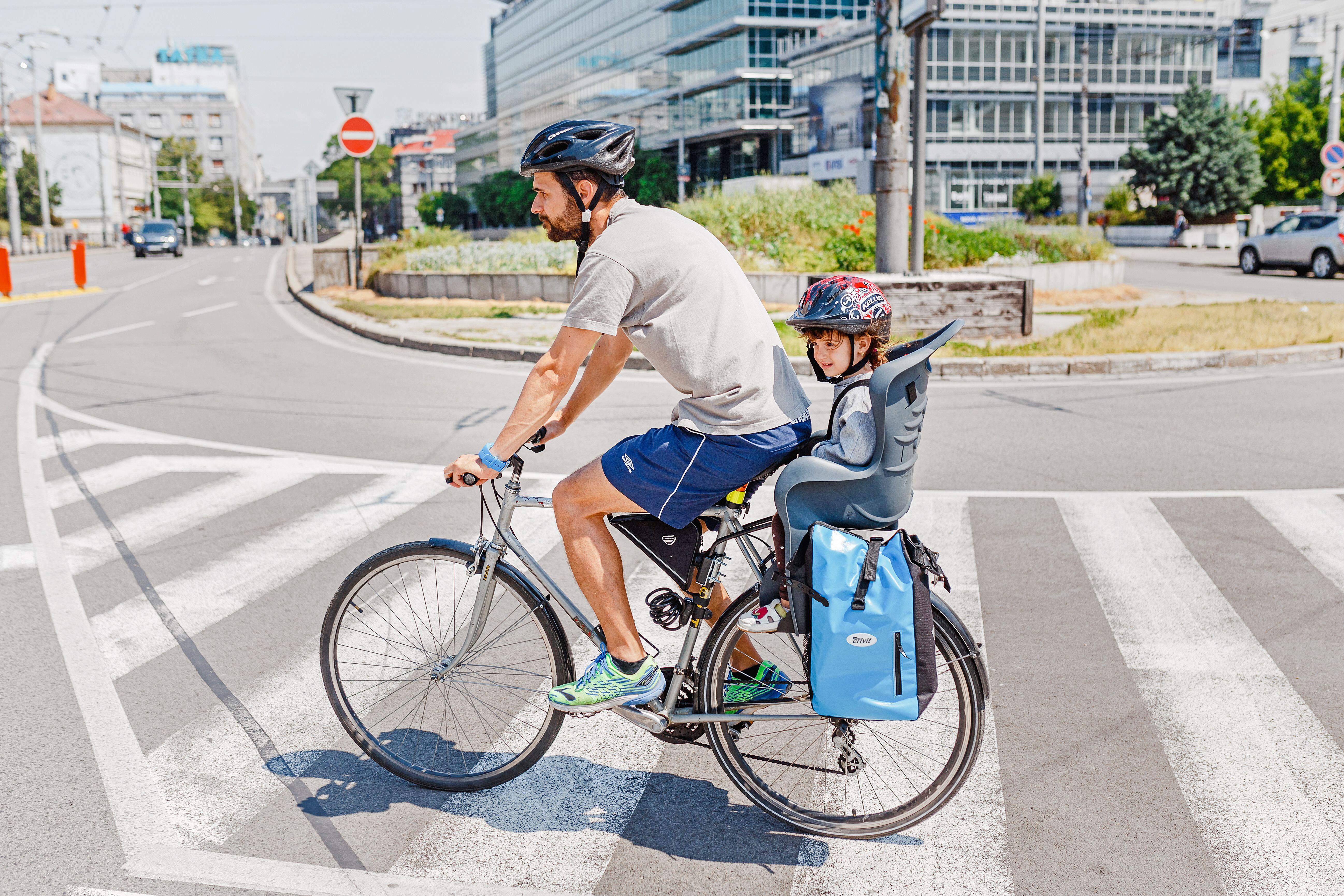 What age can a child go in a bike seat?

Most bike seats are designed for use from nine months. By this time, the majority of babies will have the head strength to sit up unaided. They can then be strapped comfortably and safely into a bike seat to enjoy the ride.

For under twos who still nap, it’s worth looking out for a bike seat that reclines, as when your child inevitably nods off during a ride it’ll prevent them slumping forwards.

What different types of child bike seat are there?

There are two main types of child bike seat – those mounted on the front and those on the back.

Rear-mounted seats are generally the most popular as they are normally bigger and offer a wider age range than many front-mounted seats. They also tend to have more options for adjustability and many can recline.

However front-mounted seats let you enjoy the surroundings of your bike ride more closely with your child as you can interact with them as you cycle.

Your little one also has an uninterrupted view of the road ahead, making it a better passenger experience. While this does mean they’re less protected from the wind, some high-end front bike seats now come with windscreens.

Front-mounted seats have a smaller age range as your child is situated between your arms and legs, meaning it can get difficult to cycle as they grow.

It’s important to check whether a child bike seat is compatible with your bike before you purchase it as not all seats will work with every bike.

Is a front or rear child bike seat safer?

When fitted correctly and used in the proper way, both front and rear seats are safe to use.

That said, they both have their safety benefits; some parents argue front-mounted seats are safer as they always have their eyes on their child, although steering can be tough when your legs and arms have to unnaturally go around your child.

Rear-mounted seats are designed to be bulkier and better protected as there’s more space at the back of the bike, although because of the sometimes uneven weight distribution, it can feel heavy to steer and harder to balance.

Whatever type of seat you’re after, we have it covered; here’s our edit of some of the best child bike seats on the market right now…

This article and featured products have been independently chosen by Sun journalists. It contains links which are ads, and if you click a link and buy a product we will earn revenue. 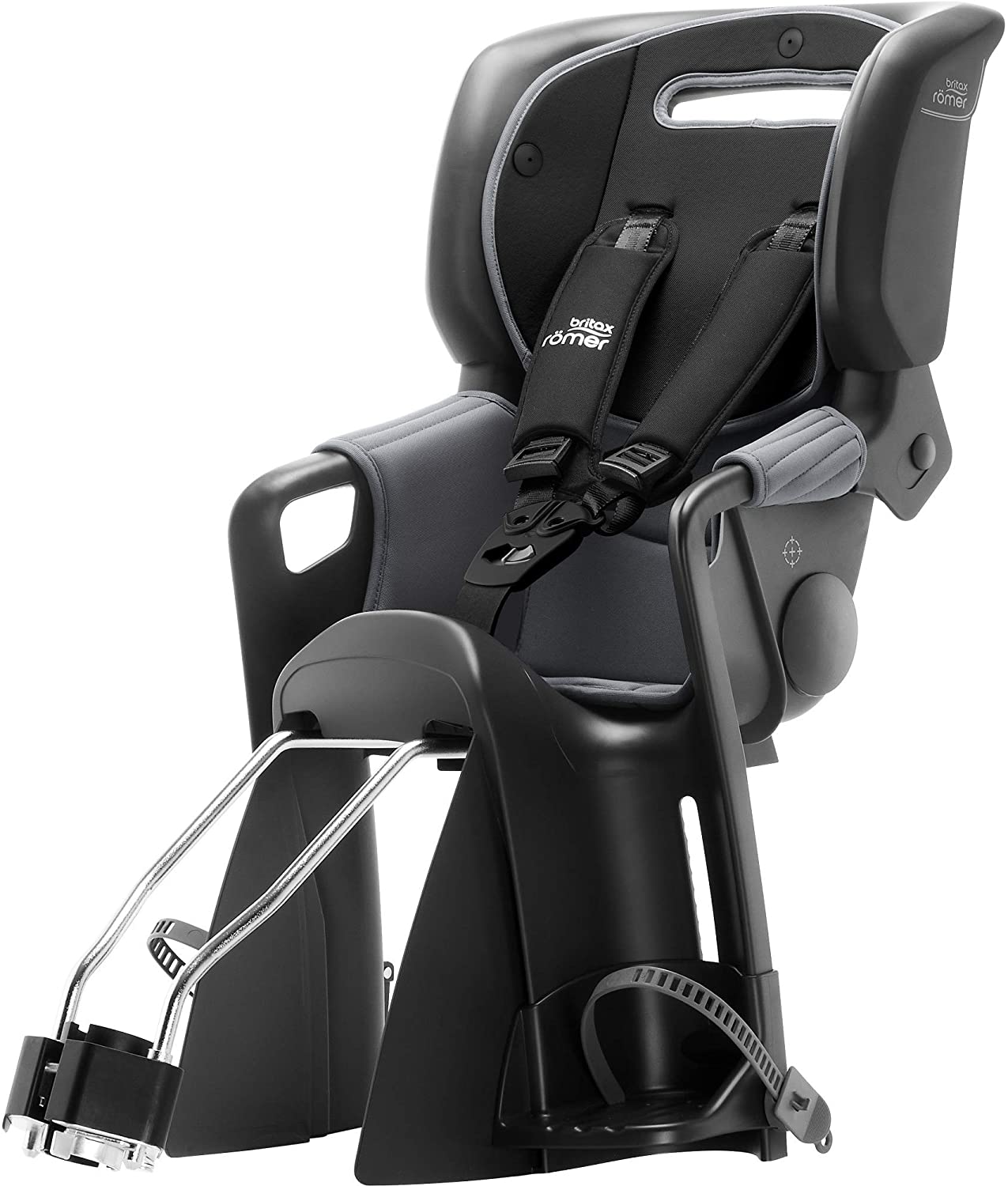 Made by parenting brand Britax Romer, best known for its sturdy car seats – this rear-mounted cantilever seat is a safe, secure, roomy option for a day’s biking with your child.

It’s installed directly onto the bike frame with a mounting bracket and is compatible with a wide variety of bikes.

A solid seat that offers a comfy ride, it has an excellent level of adjustability; the footrests, backrest and headrest can all be adjusted with one-hand, making it completely customised to your child.

Younger children on lengthier rides are also free to nap if they need to as the backrest reclines to a safe sleeping position.

The seat is suitable for children weighing 9kg to 22kg, which is around nine months to age six. 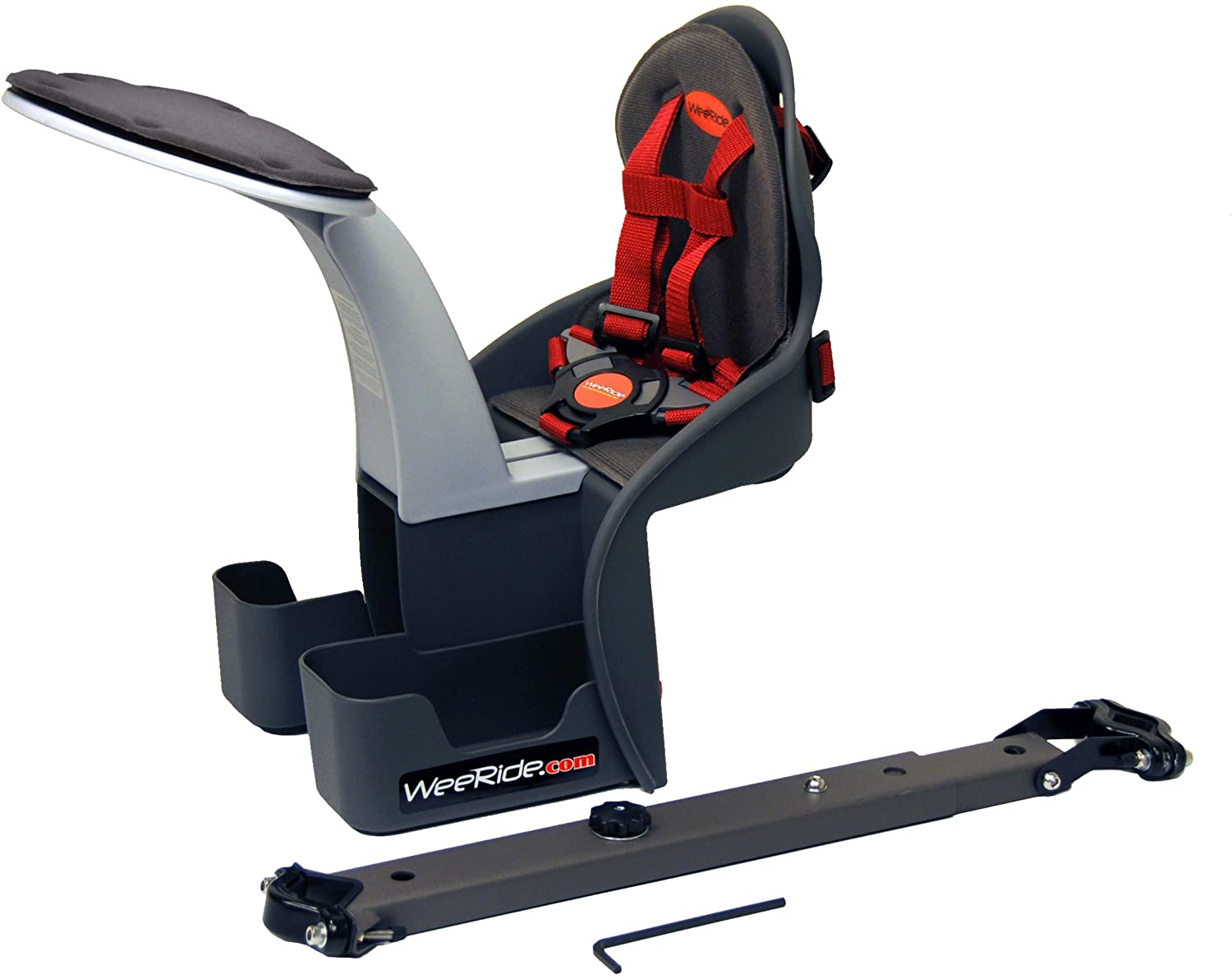 A pioneer in front-mounted seats, the best-selling WeeRide Classic is a product that stands out from the crowd.

The seat’s innovative and eye-catching headrest (or ‘nap pad’) is a comfy spot for younger children to rest if they fall asleep, and a great place for older children to give weary arms a break without affecting their sightline.

Best suited to smaller riders, its maximum weight limit is 15kg, around three years old, which is when many children become too tall to sit comfortably at the front of a bike.

While other front-mounted seats put all the child’s weight on the handlebars of a bike, the WeeRide Classic actually sits on a patented bar that connects to the bike’s seat post and headset. This means weight is positioned at the centre, reducing the impact on handling and balance.

The company confidently professes it fits 99% of bikes. 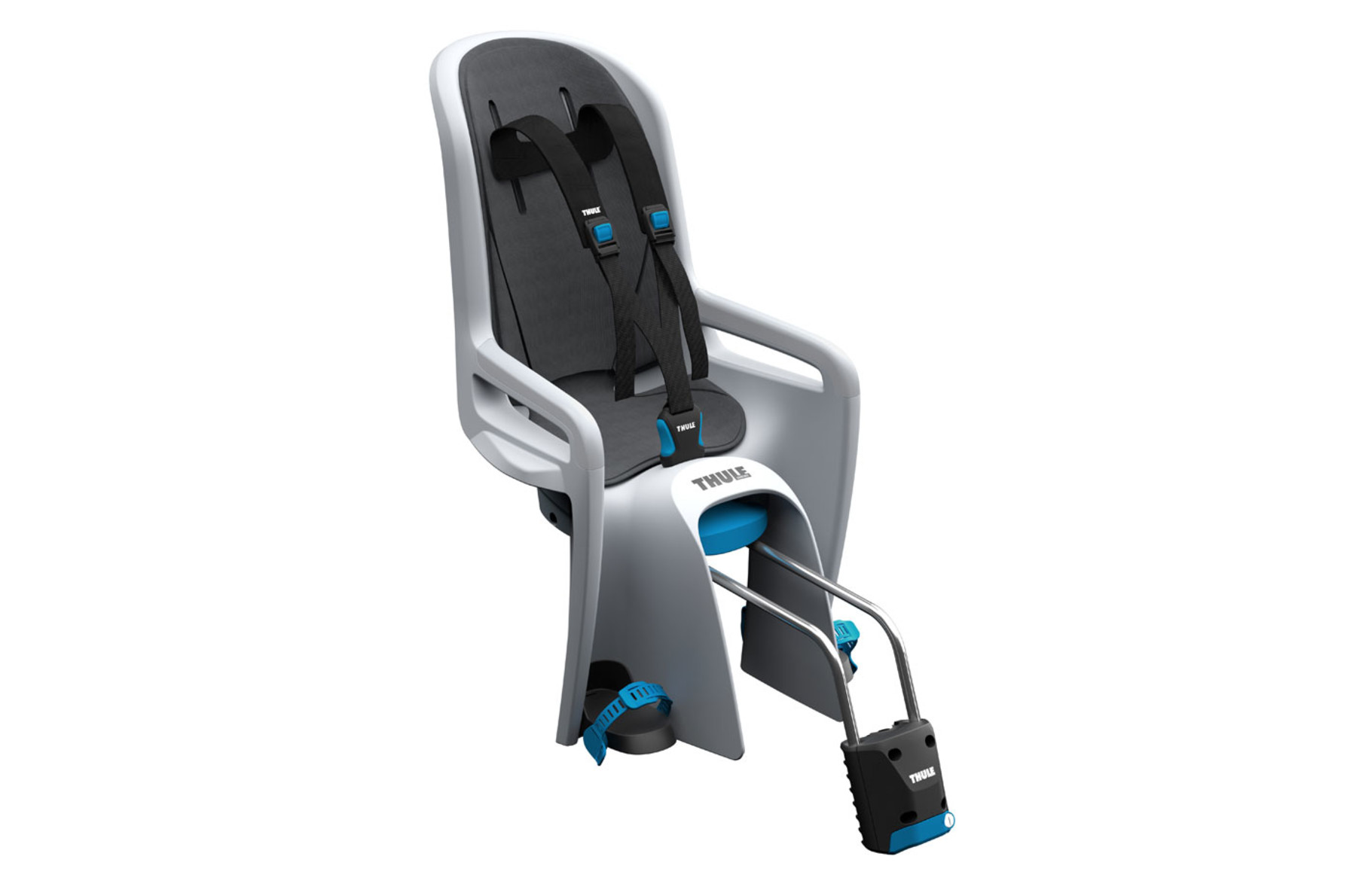 Super sleek and simple to use is how we’d describe the Thule RideAlong rear-mounted bike seat.

It’s one of the quickest models to get on and off a bike as it’s attached by a universal quick-release bracket that fits most frames.

Once attached, it feels rock solid and safe and the quality harness to strap in your child only adds to the security.

Like the majority of seats, it’s suitable for children weighing up to 22kg, which is around six years old.

The seat has five reclining positions that can be adjusted with one-hand, even while on the go; once your child is asleep, simply pull the lever at the bottom and it tilts it into place. 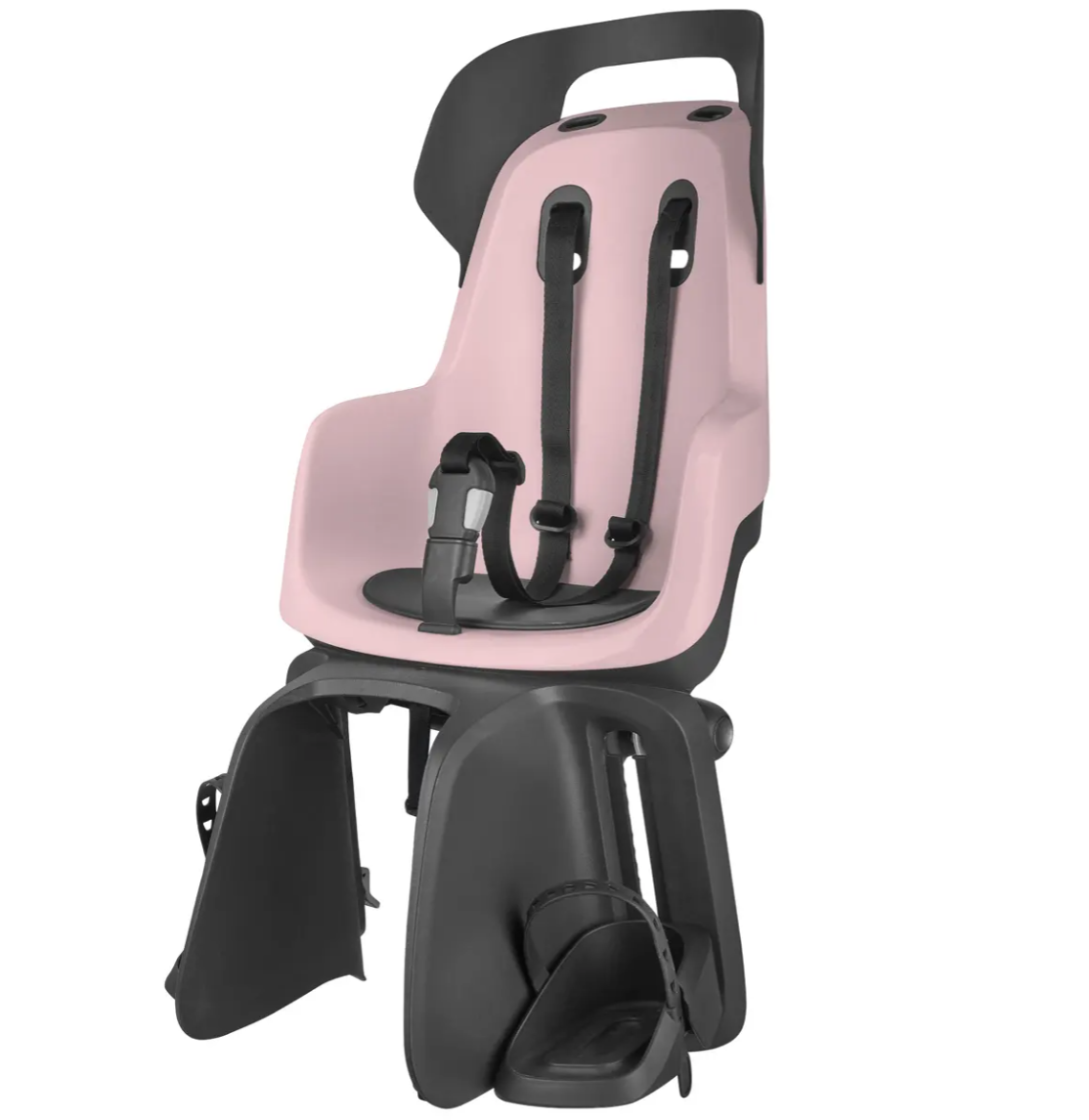 Safety is the buzz word for the BoBike Go Maxi bike seat.

Like all the Dutch brand’s bike seats, it has a double-walled shell, but this model goes one better with a shell that’s also reinforced, plus it has additional head protection and a safety reflector at the back.

Available in a variety of five on-trend pastel shades, the seat itself has a chic minimalist style that is guaranteed to make waves on your morning commute and defies its lower-than-average price point.

It is attached to a pannier rack and fitting it is straightforward, with no tools needed. It’s suitable for children weighing 9kg to 22kg (nine months to age six). 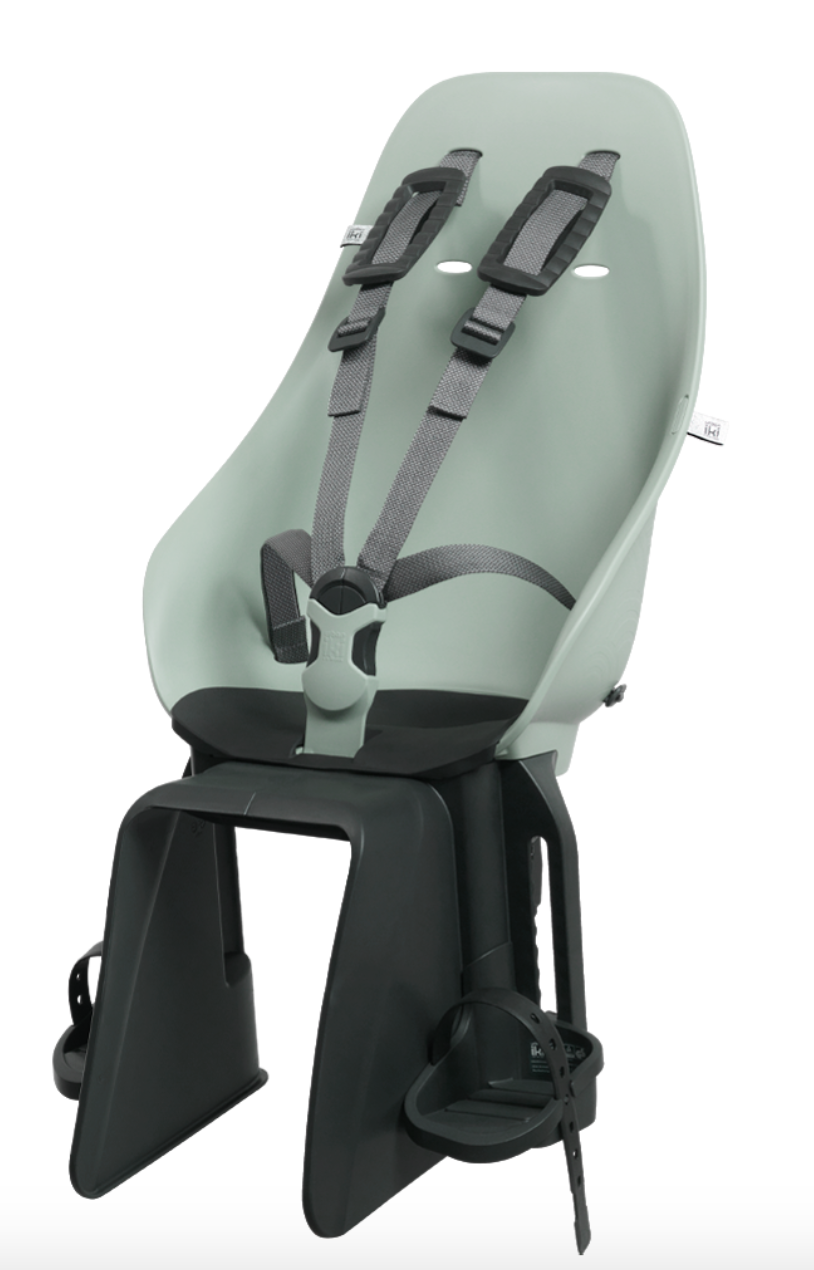 This soft, minimalist rear bike seat is a joy to behold – it’s uncomplicated, fuss-free design will delight trendy city slickers and the seat’s safety credentials are good too, adhering to all European regulations.

The clever five-point harness means you can strap your child in one-handed, which we love and it’s suitable from nine months to six years.

Its mounting system is also really quick to master and simple to use – you can be out on the road within 10 minutes of receiving the seat, which is no mean feat. 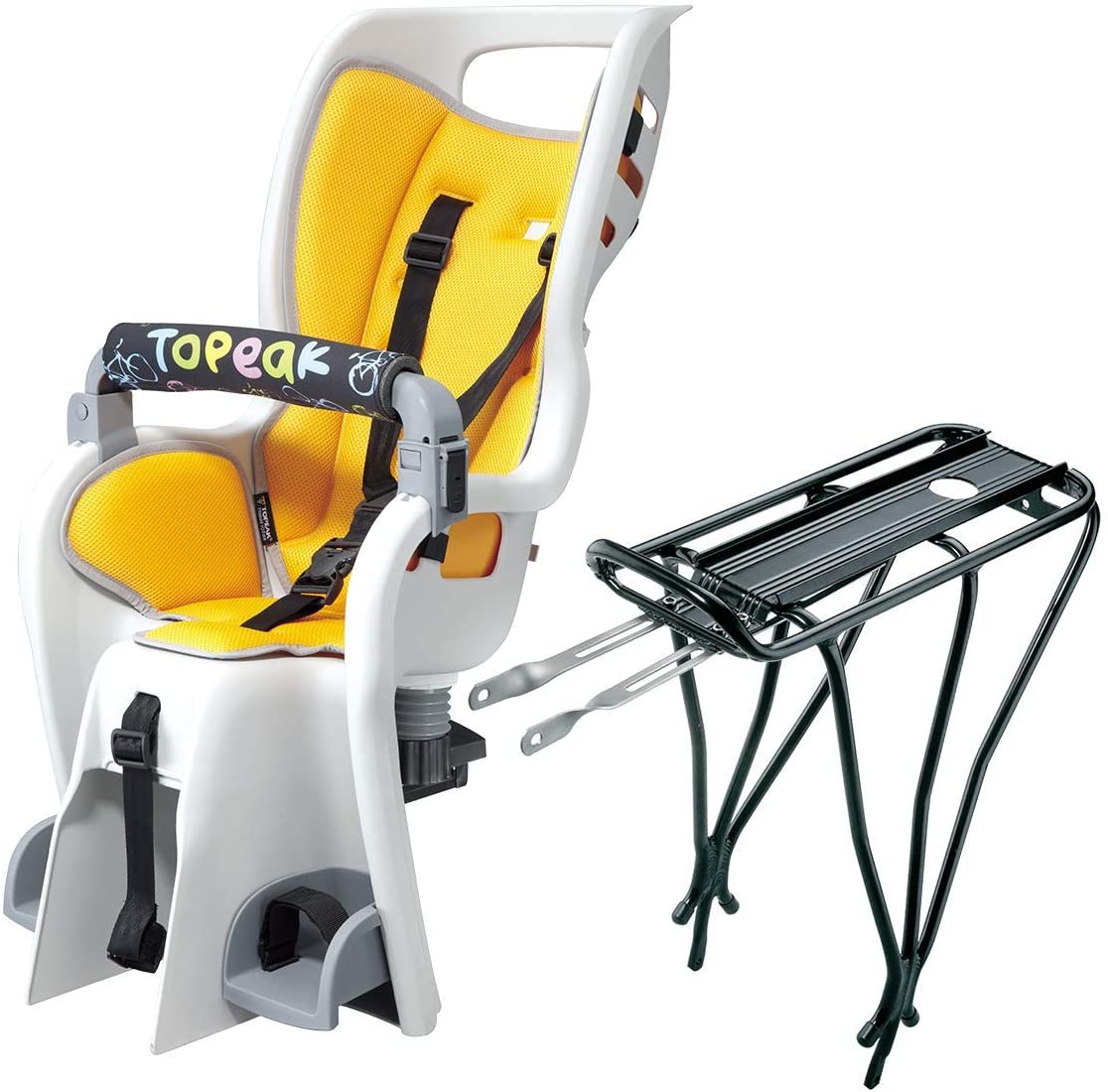 This seat comes with its own mounting rack and it also has its own dual suspension system, guaranteeing a bouncy ride for your child on the bumpiest of tracks.

Its plush cushioning and wraparound sides cocoon your little one and make it an extra comfy place for your child to sit, plus the safety bar at the front is a safe place for little hands to hang on to and a useful handle for carrying.

It’s one of the biggest and heaviest child bike seats in our line-up, but this does add to its rock solid feel.

Suitable for children aged one to six, once the rack is attached to your bike, it has a no-tool fitting meaning it’s really straightforward to take on and off.

When it comes to value for money in the child bike seat arena, this Prophet Safety Child Seat takes the crown.

A best-selling model with rave reviews and a very reasonable price tag, this rear-mounted seat does its job toting kids around really well.

Designed for children up to 22kg, around six years old, it's mounted onto your bike frame with an included attachment that takes just a few minutes to fit into place.

It feels solid and secure when fitted and while it doesn’t have the padding of other pricier seats in our edit, it’s certainly snug enough for long bike rides.

Adjustable footrests, a three-point harness and spoke guards mean your child’s feet can’t get tangled with the bicycle spokes if they move their legs, and offer an extra layer of protection. 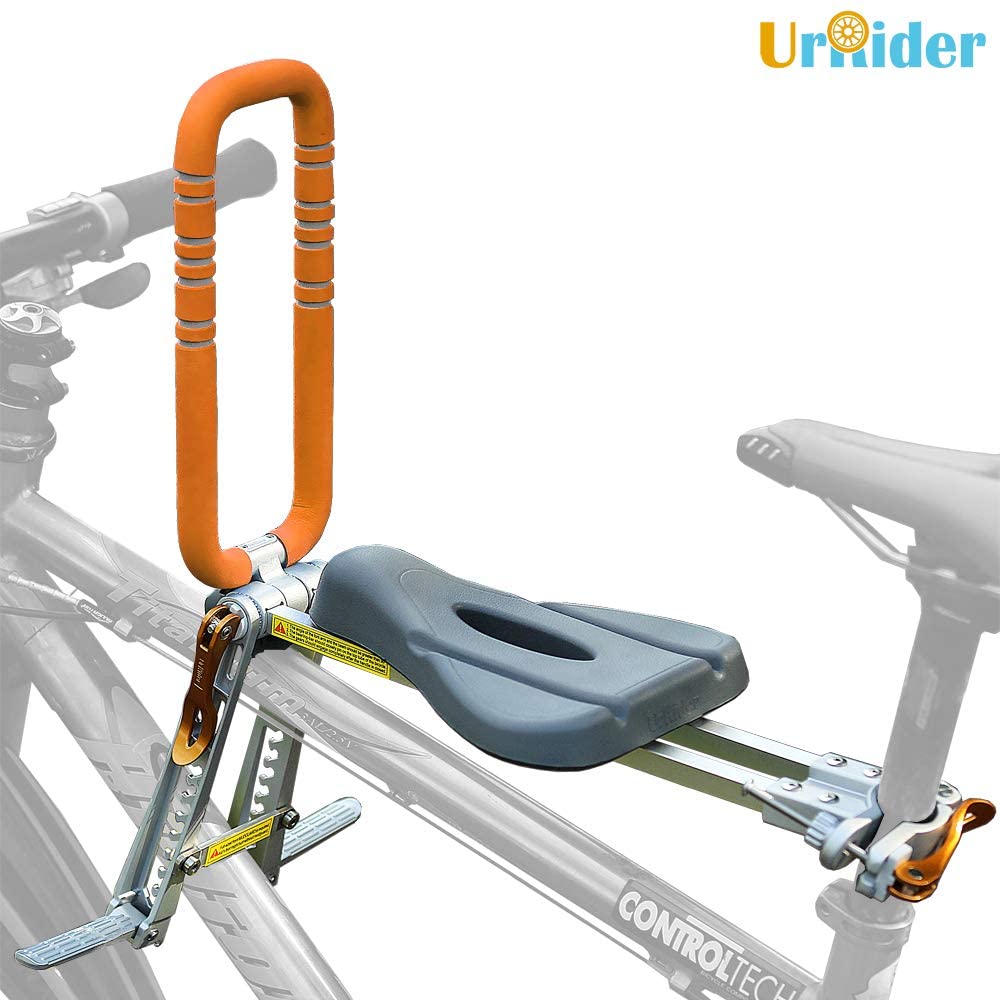 Only the second front-mounted seat in our round-up, the UrRider is unlike a traditional child bike seat – without a safety harness, it’s designed for older kids from age two to six (maximum height of 125cm) who want to hitch a ride up front.

If you need a seat for an older child where you can pop them on and off very quickly, this design is ideal.

Mounted onto the seat tube and top tube of your bike, with the seat sitting on the rail, the urRider feels solid when in place and takes up no space at all when you’re riding solo.

The seat has a soft handrail for children to grab onto which is fully adjustable and a footrest for little legs to rest on.

A compact, light and easy to use seat, the UrRider is a convenient travel companion that will make short commutes and the school run as quick and as fun as can be.

How to fit a child bike seat

Rear-mounted seats tend to be fitted in one of three ways: cantilevered seats use a bracket or clamp that is attached to the seat tube. Two prongs that come out of the seat are then inserted into the bracket offering a level of suspension.

Rack-mounted rear seats slot into a bike rack, which is fitted over the rear wheel.

The final fitting option for rear-mounted seats is those secured directly to the seat tube and seat stays, offering a more fixed option than cantilevered seats.

The majority of front-mounted seats are fixed in place directly on either the head tube, or the top tube, or on a bar that attaches to both the head tube and seat post, which distributes weight more centrally.

Which is safer: a child bike seat or a trailer?

For cycling on busy roads in towns and cities, a child’s bike seat keeps your little one close to you and within easy earshot, arguably making it a safer option than a trailer.

Your physical footprint on the road is also significantly smaller than using a trailer.

For quieter roads, bike lanes and country tracks, a bike trailer is a fantastic option – while your length will be increased, they are very stable, easy to get your kids in and out of and won’t affect steering.

They also can often hold more than one child, offering a safer alternative to transport multiple children rather than two bike seats.

Can you put a child bike seat on a road bike?

Generally no, it’s not possible to secure a child’s bike seat on a road bike or any model that has dropped handlebars.

The shape of the frame is usually not compatible, although it’s always worth checking each specific seat against your bike as there may be exceptions.

Enjoyed our edit of the best child bike seats? Check out our pick of fantastic trikes for toddlers.

On the lookout for fun toys for your little ones? Then you might just love our article on the best remote control cars for kids.

For the best musical fun you'll ever have with your children, we've got the lowdown on the best karaoke machines for kids that you can buy in 2021.