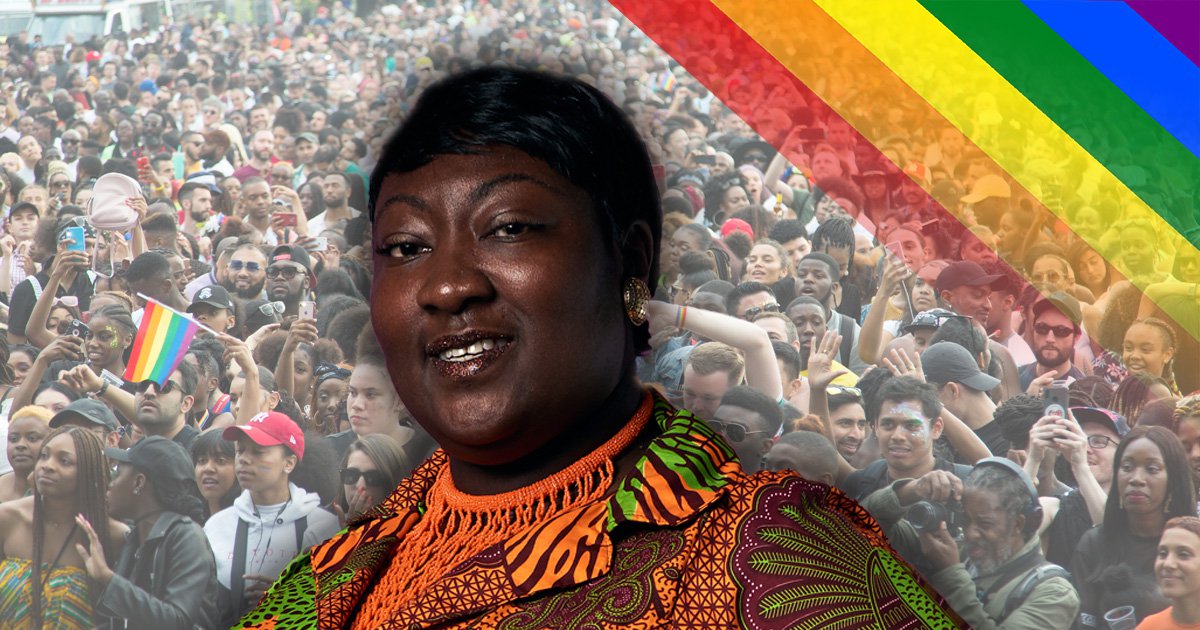 Phyllis Akua Opoku-Gyimah, more commonly known as Lady Phyll, is one of the most influential figures in the British LGBT+ community.

Born and raised in north London, Lady Phyll co-founded UK Black Pride, and in the process created an essential space for people who had traditionally been excluded by overwhelmingly white Pride narratives.

The idea of a Pride event primarily for people with Black heritage was dreamed up on a day trip to Southend-on-Sea by members of the online social network Black Lesbians In The UK. It has since grown to become Europe’s largest celebration for African, Asian, Middle Eastern, Latin American and Caribbean heritage LGBT+ people.

‘We just hosted an Instagram Live with some of the people who were at the very first UK Black Pride, and I was reminded of the sense of anticipation and nervousness I felt,’ Lady Phyll tells Metro.co.uk.

‘It was such a big thing to think we could do. To set up this celebration for LGBTQI people of colour to come together was no small feat, and we faced so much push back from the mainstream pride organisation at the time.

‘When I went to ask for their support, I was told to “f-off back to where I came from.” – So, it was nerve-racking, but I felt so elated and energised when those 400 people came together for the first time, and we were dancing to our own music, eating our own food, loving on each other, celebrating each other.

‘It was as if we could forget that we were living in an anti-Black world, even if for just an afternoon.’

Phyll says the biggest driving force behind the establishment of UK Black Pride was necessity. People from her communities were crying out for a space where they could come together and celebrate their entire identities, free from judgement, persecution and racism.

‘We weren’t the first to bring groups of LGBTQI people of colour together, of course,’ says Phyll. ‘There were club nights and book clubs, bars and dancehalls and house parties, but we wanted to create this space that was about how proud we felt to be Black and POC and LGBTQI.

‘We just didn’t have the representation we needed in mainstream Pride celebrations. We were relegated to the sidelines, we were an afterthought.

‘But we are just as important and relevant as everyone else, so why not have our own space?’

She took comfort in the existence of Black women like Linda Bellos and Monica Beadle-Blair who were shifting culture and perceptions at the time, but she says the overwhelming emotion of living through that period was fear.

‘AIDS was ravaging our communities and we certainly felt a deep sense of loss and grief,’ says Phyll. ‘I was certainly aware that being Black in the UK brought with it a certain unsafety.

‘I remember the National Front marching through Enfield and being told to hide in a shop because they didn’t like people who look like me.

‘I remember the British Black Panther Party and Olive Morris, and I remember me and my friends always looking for and finding places where we could just dance and forget and be with each other. I’ve been so amazed at how we, as Black people, find each other and love on each other.’

Things are better now, there is more freedom to be who you want to be, more examples of positive Black LGBT+ role models in prominent positions. But Phyll isn’t ready to take her foot of the gas. The work is far from done.

‘I always take progress with a pinch of salt,’ she says.

‘I remain grateful for all the activists and organisers who have kept pressing for greater equality for Black people and for LGBTQI people, and in many ways, the expressions of Blackness and LGBTQI-ness we’re seeing now – in all their varied forms – is a result of the path that was paved by the generations before.

‘At the same time, we do see a rollback of rights, of progress and of acceptance. The Sewell Report’s denial of institutional racism, the campaign against critical race theory, the horrible treatment of our trans siblings, the disregard for the lives of our LGBTQI refugee and asylum-seeking siblings. We have so much work to do.’

Phyll’s believes the lives and livelihoods of Black people and people of colour from LGBT+ communities continue to be overlooked, excluded and written out of history.

‘At UK Black Pride, we just concluded our first community survey and we are going to build an action plan that speaks to the needs of our communities,’ she says.

‘I really want Black LGBTQI people and people of colour in the UK to know that they are loved and that they matter. The goal is that we get to live free from violence and racism, that our trans siblings get to live the lives they deserve to live and that our elders are looked after as they grow older.

‘There’s a lot of nurturing and caring taking place in our communities and we want to add to that, to help people feel safe and loved and seen.’

Like so many people from Black and racially minoritised groups, Phyll feels the weight of the last year heavy on her heart.

‘The murder of George Floyd ignited something globally and it was amazing to watch people rise up in defence of Black lives,’ she says. ‘But it’s also been exhausting, so many of us are really, really tired.

‘Where is the reprieve for our joy? How do we turn off and not have to answer the questions of allies? How do we protect ourselves and our mental and emotional health? These are questions that I think about all the time.

‘How do I create space for my team, who are all volunteers, so they know they can take breaks and relax and not feel guilty? How do I do that for myself?’

Phyll says UK Black Pride could be part of the answer to some of these questions. She hopes this year’s event will provide some solace, some space for recovery, joy and the tools to uplift the spirit.

UK Black Pride 2021 will be delivered digitally over three-days and will be a weekend full of performances, wellbeing workshops, conversations and special guests.

‘After the year we’ve had, we wish we could celebrate in person, but offering up this digital-only event is the surest way we could bring our communities together safely,’ says Phyll.

‘Our theme is Love and Rage, and we chose this theme in recognition of the righteous anger our communities feel over how we’ve been treated, not only this past year, but all too often.

‘We always want to create spaces that allow us to demonstrate our enduring love for each other.’

Do you have a story to share? We want to hear from you.

Get in touch: [email protected]