This incredible growth is largely down to what has become known as the “ginaissance”; in the past 12 months alone, the equivalent of 86 million bottles of gin worth some £2.1billion were sold in Britain. Add to this the £590million worth of UK gin exports and the British gin category is now worth £2.7billion. Although it has to be predominantly juniperbased, gin is a versatile spirit that can be infused with a vast range of botanicals to create different tastes. That versatility has sparked the massive growth in new distilleries over recent years.

The knock-on effect, according to experts, has been the development of a whole range of new British spirits to stock up the drinks cabinet: rums, flavoured vodkas and the emergence of the English and Welsh whisky market.

Equally, exports of Scotch whisky were worth £4.9billion in 2019, with more than 1.3 billion bottles exported – equal to 42 a second.

With 133 distilleries north of the border, Scotch whisky represents more than a fifth of the UK’s entire exports of food and drink. There is little doubt that, from large-scale distilleries to kitchen-table start-ups, Britain is surfing a spirits boom.

Fewer than two years ago, Darren and Sam Graves, a husband and wife team from Kent, began making plans to resurrect the legacy of Maidstone’s proud distilling history.

The town’s contribution to gin-making spanned nearly 250 years until 1982 when its distillery closed. 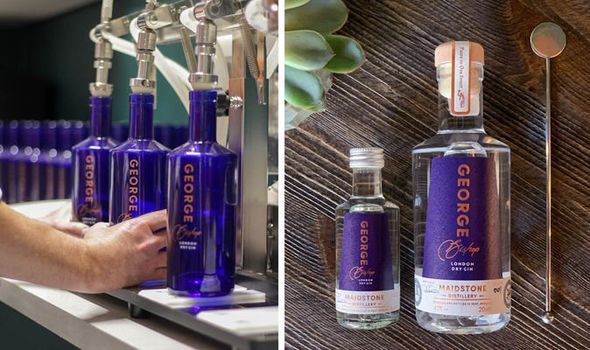 Getting their hands on a beautiful 450-litre copper still was the start for the Maidstone Distillery. Their flagship George Bishop gin, named after the town’s first modern distiller, is a delicate and delicious mix of 15 botanicals.

“Further to creating fine quality spirits, we want our products to tell a story and champion the local community,” says Sam. Visit themaidstonedistillery.com for great Christmas gifts, use discount code XMASFIVE for £5 off any online order over £50

It began, as many great ideas do, with some friends chatting in a pub – discussing the fact there had not been a whisky distillery in Wales for more than 100 years.

Now, 20 years on, Penderyn Distillery in South Wales exports its whisky, to more than 40 countries. The secret of their success is the Faraday Still which produces a spirit at an industry high of 92% abv, which means their whiskies are fresh, fruity and flavoursome.

Using water off the Brecon Beacons, hand-selected barrels and with an all-women distilling team, Penderyn is an award-winning enterprise with an international reputation.

Visit penderynstore.com for more information and to buy their whisky 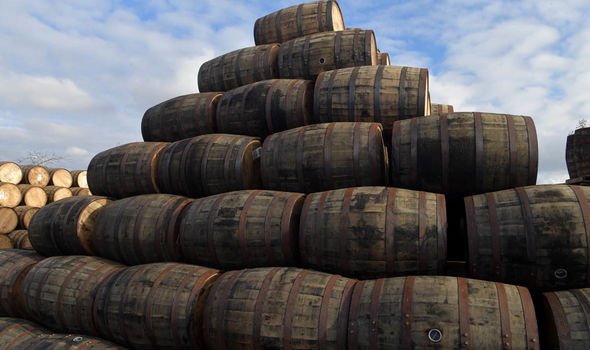 The first new independent whisky distillery in the city for more than a century, the Glasgow Distillery Company, and its flagship Glasgow 1770 Single Malt Scotch Whisky, has led the way for a new wave of urban single malt distilleries.

Producing it from the centre of Glasgow, it aims to help re-establish the city alongside Scotland’s other great whisky regions. Founder and CEO Liam Hughes said: “This has been an incredibly busy year for us.

“Our online sales have increased exponentially over this time and we’ve arguably been busier than ever. And just a few weeks ago we won the title of Scottish Whisky Distillery of The Year at this year’s Scottish Whisky Awards.”

The firm offers personalised bottles of its Glasgow 1770 Single Malt Scotch Whisky for a unique gift.

Visit glasgowdistillery.com and use discount code DISTILLERYOFTHEYEAR for 10% off online orders and free p&p

Housed in a stunning Victorian pump house on the shores of the River Medway, half a mile downstream from Chatham Dockyard, Copper Rivet Distillery has just released its first English whisky: Masthouse.

It also produces a delightfully fragrant Dockyard Gin, an oak-aged Damson gin, a Kentish pink strawberry gin, their peppery Vela Vodka and their Son of a Gun English Grain Spirit.

Bob Russell and his sons, Matthew and Stephen, started distilling four years ago and remain one of only a handful of English distilleries to make their spirits from grain to glass. They have a contract with the Burden farming family on the neighbouring Isle of Sheppey and even send spent cereals back to the farm for the cows.

Their giant pump house building, is half-distillery and half restaurant. Copper Rivet Distillery’s spirits are currently available through Harrods, waitrosecellar.com, masterofmalt.com and copperrivetdistillery.com where readers can use the discount code EXPRESS20 to get 20% off online orders (excluding MasthouseWhisky) in December

Experts have been blending and bottling Scotch whisky, winning awards at Douglas Laing & Co since 1948. Managing director Chris Leggat runs the Glasgow-based business alongside the third generation of its founding family, Cara Laing.

“In 2019, as well as blending and bottling, we became distillers after the acquisition of the Strathearn distillery in Perth,” says Chris. “We are focused on spirit quality and innovation.”

The business focuses heavily on its Remarkable Regional Malt range. “One of the products is Scallywag, our 100% Speyside Small Batch Malt which carries a heavy sherry influence and is the ultimate distillation of Speyside, whilst being bottled at 46% with natural colour and proudly non chill filtered,” explains Chris. 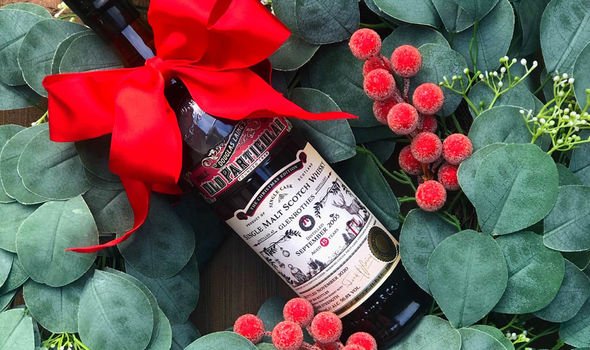 Check out douglaslaing.com and use discount codeVIP10 for 10% off all products until December 31

After a short break of 526 years, Drew and Helen McKenzie Smith will once again create single malt Scotch whisky at Lindores Abbey Distillery in Fife.

Drew’s grandfather John Howison purchased the site back in 1913 but was unaware the abbey was the spiritual home of Scotch whisky; tax records from 1494 reveal a monk of Lindores produced “aqua vitae” for King James IV – the earliest written record of the production of whisky.

“All our barley comes from within a mile of the distillery and our current USP is the aqua vitae,” says Drew.

“Our spirit is macerated with fruit, local herbs and spices, the perfect serve being over ice with a slice of orange and ginger ale.” 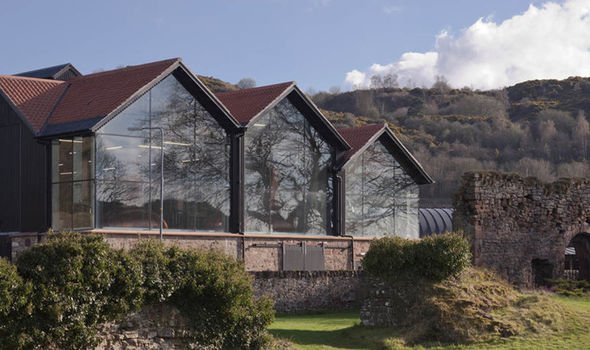 With their first whisky due to mature on December 20 after three years in an oak barrel and available for sale in 2021, Drew and Helen have launched their 1494 society – joining being the only way to get a bottle of the first whisky from Lindores Abbey, in 500 years.

Visit lindoresabbeydistillery.com and use discount code ABBEY20 for a 10% discount on selected gifts until Dec 31

Currently building the UK’s first carbon neutral distillery, its original gin was voted Scotland’s number one in 2018 out of a blind tasting of 120 gins.

Eden Mill Gins use local botanicals such as sea buckthorn, grown near to the distillery, for a refreshing citrus note to the original gin. “We love sharing our passion for gin.

“It was a source of great pride that more than 5,000 people have taken part in our virtual gin tastings in lockdown,” said founder Paul Miller.

Coming from a traditional farming family, William Chase set up a field-to-bottle distillery in 2008, creating spirits from potatoes and apples sourced in the Herefordshire countryside. 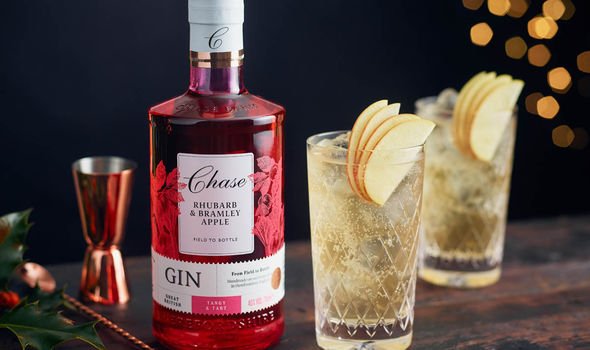 “The quality of our products isn’t by chance. It takes meticulous dedication, craftsmanship and passion from our team.

“This approach really makes us different and it is something you can taste in our spirits,” says James. They now export gin, right, to more than 40 countries.

Its Forest Gin is globally recognised.

Founders Karl and Lindsay Bond started experimenting in 2014 (with the help of their daughter, Harriet, then six), using organic and foraged ingredients and their own spring water to create tiny batches. 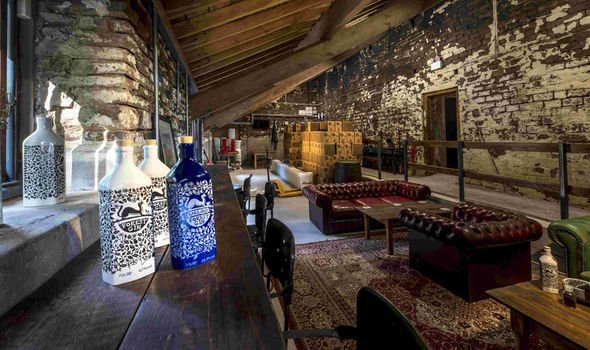 They decided to decant the liquid into porcelain bottles, to see if anybody would be interested in tasting it. And the rest is history.

“We are still a tiny, independent distillery and, between five of us here, we continue to produce our products the same way that we did at home,” explains Karl.

“We forage for our ingredients regularly and do our very best to ensure these fresh, natural flavours come through.”

They successfully export all over the world, including to Japan, New Zealand and Switzerland.

Nestled in the picturesque village of Stourton, in Warwickshire, the Cotswolds Distillery has been making award-winning spirits since being founded by Daniel Szor in 2014.

It employs around 50 people and a new visitor centre opened in April last year with a shop and distillery cafe. 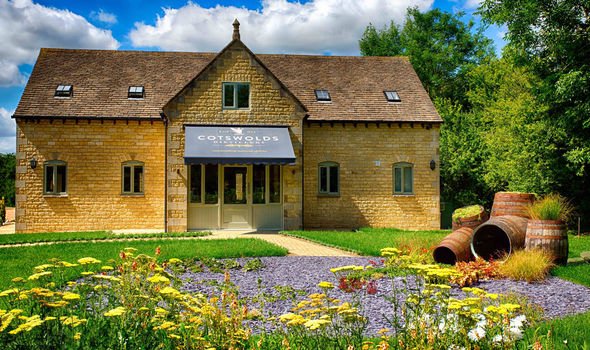 Daniel says: “We are proud to be an employer in a rural economy and champion local ingredients.”

The firm currently exports to 36 markets including the United States, France, Germany, Australia, Japan and Singapore – and its gin and whisky are available in Sainsbury’s.

Visit cotswolds distillery.com and join the Cotswolds Distillery Club to get £5 off your next order

Founded in 2013 by Karl and Cathy Mason in the stunning country town of Bedale, North Yorkshire, Masons of Yorkshire was started with a simple mission: to create gins with a difference.

Their premium range of gins have won the most prestigious awards worldwide and the Masons team remains devoted to making exceptional, distinctive gins.

Masons gins are available nationwide in Morrisons, and in local Yorkshire stores of Co-op, Tesco and Booths, as well as through their own online shop.

RICHARD LITTLEJOHN: Politicians being paid more to cope with Covid-19