Two brothers accused of profiting off of coronavirus fears by buying up thousands of bottles of hand sanitizer and medical masks to resell at inflated prices have been ordered to halt operations amid an investigation by the Tennessee Attorney General’s Office.

Matt Colvin and Noah Colvin of Hixson, Tennessee, were served a complaint from the AG’s office on Saturday shortly after they showed off their incredible stash of goods to media outlets.

“I saw a demand, that’s what I have to say about that,” Matt Colvin told Chattanooga station WRCB-TV of his inventory, which he said he collected while driving around to stores in Tennessee and Kentucky.

Until his online store was shut down by Amazon over price gouging complaints, he sold 300 bottles of hand sanitizer for between $8 and $70 each, he told The New York Times.

Colvin said he doesn’t believe what he was doing was price gouging, in part because alcohol-based hand sanitizer is expensive to ship, since it is considered a hazardous material.

“Just because it cost me $2 in the store doesn’t mean it’s not going to cost me $16 to get it to your door,” Colvin told the Times.

He also expressed a belief that his business was acting as a public service, arguing that he was moving resources from areas that didn’t have an overwhelming demand to areas that did. 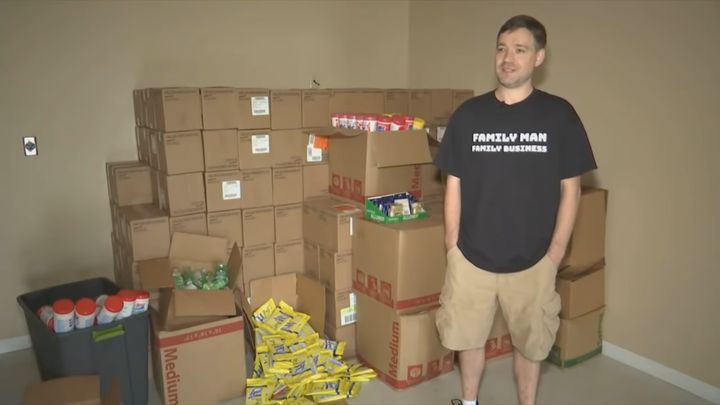 But with his online stores shut down, Colvin lamented that he was stuck with 17,700 bottles of hand sanitizer and no one to sell them to. He compared his fast rise and fall to “whiplash.”

“From being in a situation where what I’ve got coming and going could potentially put my family in a really good place financially to, ‘What the heck am I going to do with all of this?’” he told the Times.

In the wake of his interviews, Colvin said on a website that reportedly belongs to him that all of his remaining hand sanitizer will be donated to a local church and first responders.

A spokesperson for the Tennessee Attorney General’s Office confirmed Sunday that most of the products were donated to a local church after the office verified the church’s plan to disseminate the hand sanitizer. Roughly one-third of the items were being held to return to Kentucky.

She said the brothers donated the items voluntarily, but that doing so would not “get them off the hook.”

“If our investigation determines that they broke the price gouging statute, we will seek appropriate penalties,” the spokesperson said.

Tennessee Gov. Bill Lee declared a state of emergency on Thursday due to the spread of COVID-19, which is the disease caused by the coronavirus. This declaration makes it illegal for vendors to charge too much for certain items.

“This is a time where we have to focus on helping our neighbors, not profiting from them,” Cameron said.

Climate change warning: 230 billion tons of carbon in soil could be released