The state’s Supreme Court failed to rule on an attempt to halt the law, which allows private citizens to sue anyone who assists a pregnant person seeking an abortion after six weeks.

The state’s Supreme Court failed to rule on an attempt to halt the law, which allows private citizens to sue anyone who assists a pregnant person seeking an abortion after six weeks. Individuals found guilty of violating the law will have to pay $10,000 to the person who brought the suit to court.

The law states that terminating a pregnancy is prohibited after a fetal heartbeat is detected, which can be before a woman even knows she is pregnant. A “medical emergency” is the only exception for the abortion.

The court can still intervene on behalf of abortion rights groups requests, but, for now, the legislation is in effect, becoming one of the country’s most restrictive rule on terminating a pregnancy.

In a statement, President Biden criticized the law, saying it will “significantly impair women’s access to the health care they need, particularly for communities of color and individuals with low incomes.”

“My administration is deeply committed to the constitutional right established in Roe v. Wade nearly five decades ago and will protect and defend that right,” he added.

“The newest Texas abortion ban, #SB8, gives politicians, neighbors, and even strangers the right to sue those who provide — or just help patients get — abortion after 6 wks. The time to fight for our reproductive health & rights is now! #BansOffOurBodies,” was tweeted by both Alyssa Milano and Yvette Nicole Brown.

Patricia Arquette shared, “Texas claims to believe in freedom while  demanding oversight of American Womens Uterus’s as property of their state,” while Ellen Barkin posted, “Time to let Texas secede.”

And Bradley Whitford wrote, “Women don’t inseminate themselves. If you want to take away their right to control their own bodies without insuring that the inseminator takes full legal responsibility for the child at the moment of inception, you’re not ‘pro-life’. You just hate women. You want to punish them.”

Keep reading for more reactions, below. 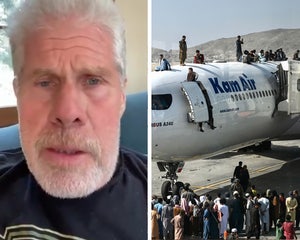