Even in the middle of a heavy training block and with a shoulder that remains a work in progress, Kyle Chalmers continues to be an unstoppable force in the pool after thundering to another Australian championship in his pet 100m freestyle.

The Olympic champion continued his impressive return from shoulder surgery late last year to lead from start to finish in the final on the Gold Coast on Friday, hauling himself to the wall in 48.01 seconds, the second fastest in the world this year, ahead of Dolphins teammate Jack Cartwright (48.81). 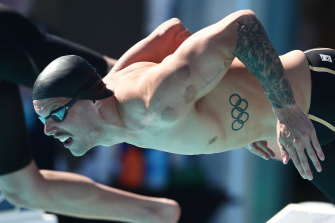 Kyle Chalmers continued his impressive return from shoulder surgery late last year to lead from start to finish in the 100m freestyle final on the Gold Coast.Credit:Getty

It was an eye-catching and hugely encouraging swim for Chalmers in just his second meeting back from surgery. Emma McKeon finished ahead of sprint ace Cate Campbell in the women’s final, with McKeon (52.49s) the only finalist to drop time from their heats the night before.

McKeon has mostly been a 200m freestyler and 100m butterflyer but has taken significant strides in her freestyle sprinting and now shapes as a major player in that event in Tokyo, as well as a key part of the Olympic champion relay.

Chalmers is a noted backmarker but against a field that wasn’t going to test him too much, he had little choice but to start fast and set his own pace. He wanted to crash through the 48-second barrier again and will no doubt do so at the official trials in June.

“I had a crack at it. It’s one of those races where you can be out fast but also out hard. I think I was both … I was out fast but it was pretty taxing on the body. I gave it my best shot to try and go 47 anyway,” Chalmers said.

‘I know it’s just going to get faster. I love racing fast.’

“I know it’s just going to get faster. I love racing fast and I don’t like giving myself excuses for being in hard work. It would have been really nice to crack that 47 but it’s only my second competition back.”

Chalmers need not be so hard on himself. It was a swim that answers any lingering doubt about his comeback from injury and the signs all point to another incendiary showdown with American world champion Caeleb Dressel in Tokyo.

The Australian is working on the technical aspects of his racing – diving especially – to try and make up the fractions of seconds he needs to beat Dressel, an athletic freak who has some of the best reaction time, dive, underwater work and turns swimming has ever witnessed.

“If I can improve my dive and be within a fractional margin at 15(m), I know my swim speed is my strength. For me, it’s not necessarily being any faster on the way out, it’s still swimming to my strengths,” Chalmers said.

“We’re talking 0.01 of a second. At world champs, it was reaction time off the blocks. Skills aren’t easy to improve but it’s something I’m working on day-in, day-out and I know I can improve.”

McKeon doesn’t get the headlines of some of the other big stars of Australian swimming but she already has the writing on the board, winning individual silver medals at Olympic and World Championship level. It is looking like a very bountiful year for the 26-year-old.

She has a 200m freestyle pedigree, is a brilliant racer and Campbell couldn’t get past her in the closing stages after McKeon went out hard and took the early lead. Expect Campbell to hit back at the Olympic trials but for now, the baton has been passed.

“I always mainly trained for the 200, and come down to 100. So to be getting those times, that gives me a lot of confidence. The more 52s I swim, the more confident I get,” McKeon said.

“That gives you confidence, knowing I’ve done the 200 work. When I turn I know that I’m going to be able to hold my ground.”

In the women’s 100m backstroke final, teenager Kaylee McKeown (58.60) continued her brilliant form to claim the national crown ahead of a resurgent Emily Seebohm (59.22) , who is trying to make her fourth Olympic team.

Minna Atherton, who won silver in this event at the 2019 FINA World Championships, finished fifth with a 1:01.52. She will need sharp improvement to ensure she finds a spot in the top two and hits the qualifying mark (59.71) at the Olympic trials.

Most Viewed in Sport

All Def Digital Launches Channel For Women, By Women