‘It looks like a Smurf dungeon!’ Changing Rooms viewers are divided over a vibrant blue living room inspired by a cabinet of curiosities – as some insist it’s ‘one of the best makeovers yet’

Changing Rooms viewers were left divided over a bright blue makeover of a converted garage on last night’s episode.

Laurence Llewelyn-Bowen and guest designer Micaela Sharp visited the town of Bedworth, Warwickshire, to meet science teachers Ann and Kevin, who live on the same street as their daughter Hannah and son-in-law Chris.

The couples each had design dilemmas they needed help solving with the help of the Channel 4 design team.

Ann and Kevin had lived in their family home for almost 30 years and were struggling with how to best utilise the space in their converted garage, which they use as a TV room and home office. 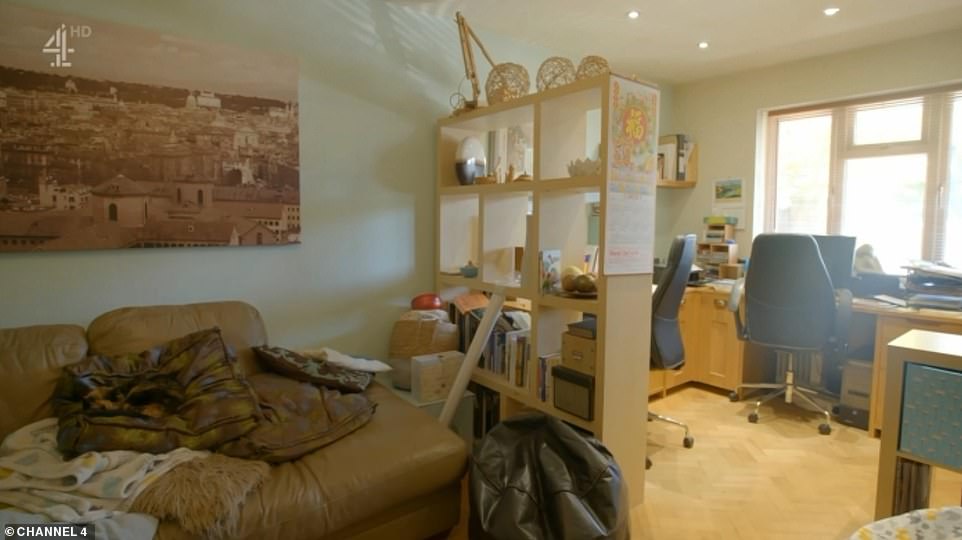 Before: Science teachers Ann and Kevin had lived in their family home in Warwickshire for almost 30 years and were struggling with how to best utilise the space in their converted garage, which they use as a TV room and home office 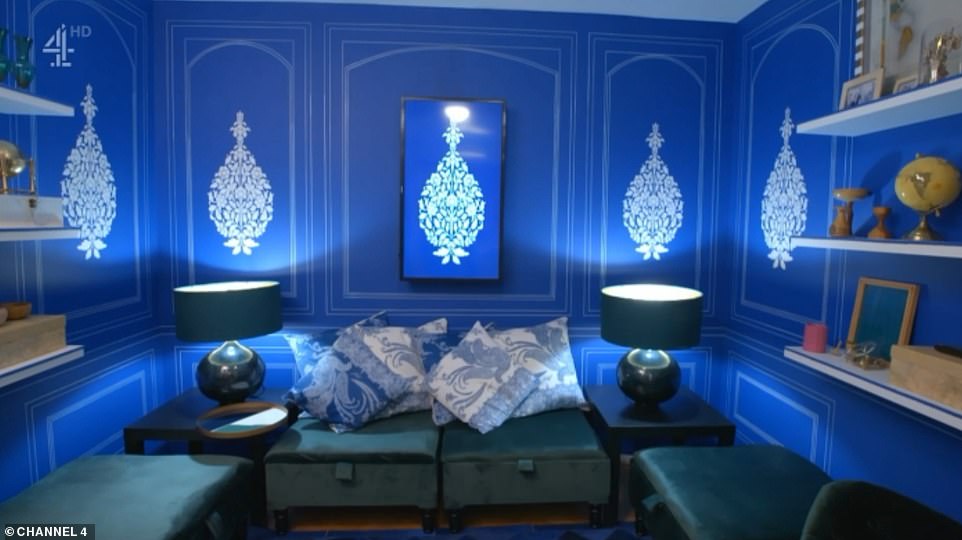 After: Their room was given a vibrant makeover by their daughter and son-in-law, guided by Laurence Llewelyn-Bowen. The room features storage seats (pictured) and a TV concealed as a piece of wall art (seen centre) which can be rotated 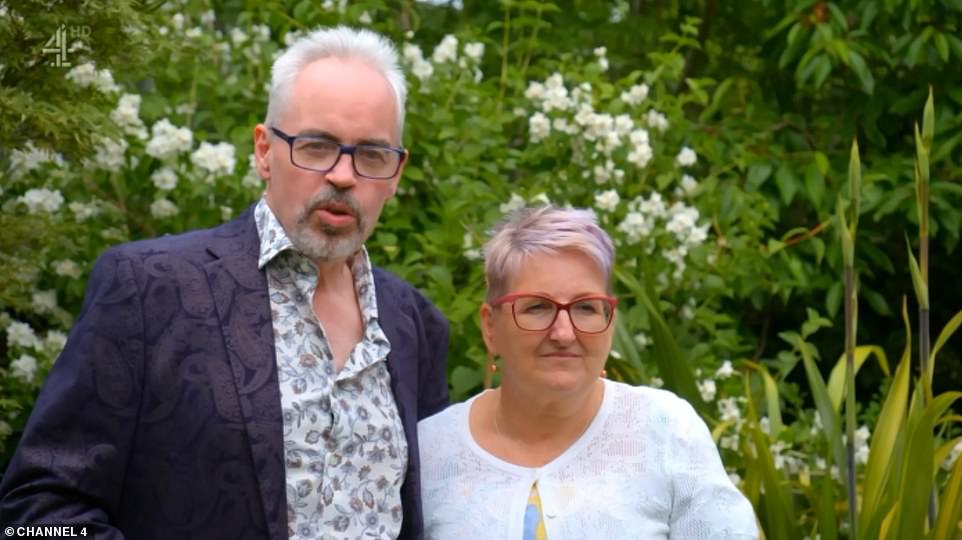 Delighted: Kevin and Ann, pictured, were thrilled with the results of the bold blue makeover but viewers weren’t sure

Meanwhile Hannah and Chris wanted to find a way to revamp a home office/bedroom in their 1960s property.

Working with Micaela, Ann and Kevin gave Hannah and Chris’ room a vibrant makeover complete with a cosy ‘cabin’ bed, floral wallpaper ceiling, and a divisive ‘shaved rug’ that sparked reaction on Twitter.

But it was Hannah and Chris’ transformation of their parents’ place under the watchful eye of Laurence that really had viewers talking.

One viewer compared it to a ‘Smurf dungeon’, while another added: ‘That blue room! I love interiors programmes but there’s only one Changing Rooms, trashing houses with garish designs since 1995!’

Another tweeted: ‘The bookcases, the cabin bed and the terrazzo desk are great but the wallpaper on the ceiling and all the blue are a step to far for me #ChangingRooms.’

However others insisted it was one of the best makeovers they have seen on the show. 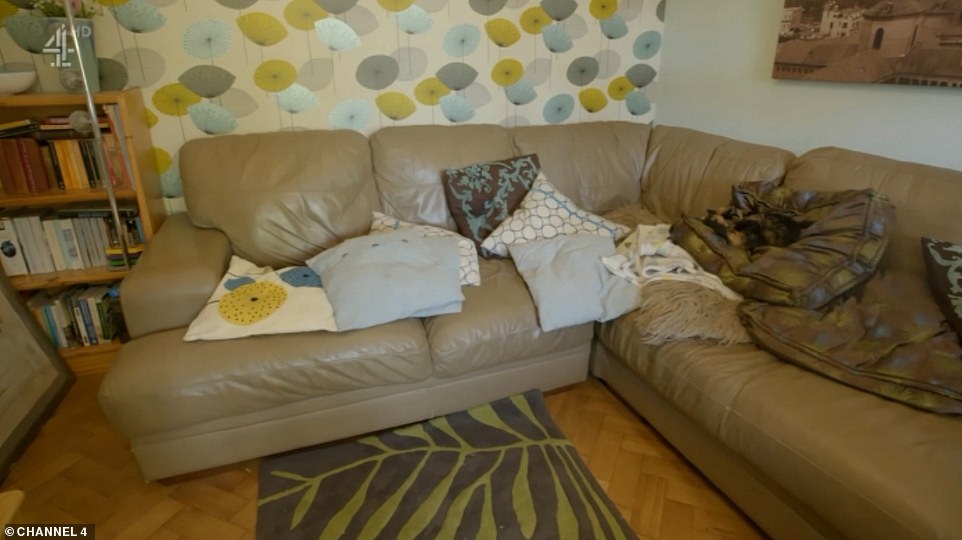 In need of TLC: The converted garage had previously been a space where Hannah could socialise with friends when she was socialising at home. But over the years it had lost its purpose and was rarely used. It was dominated by a corner sofa 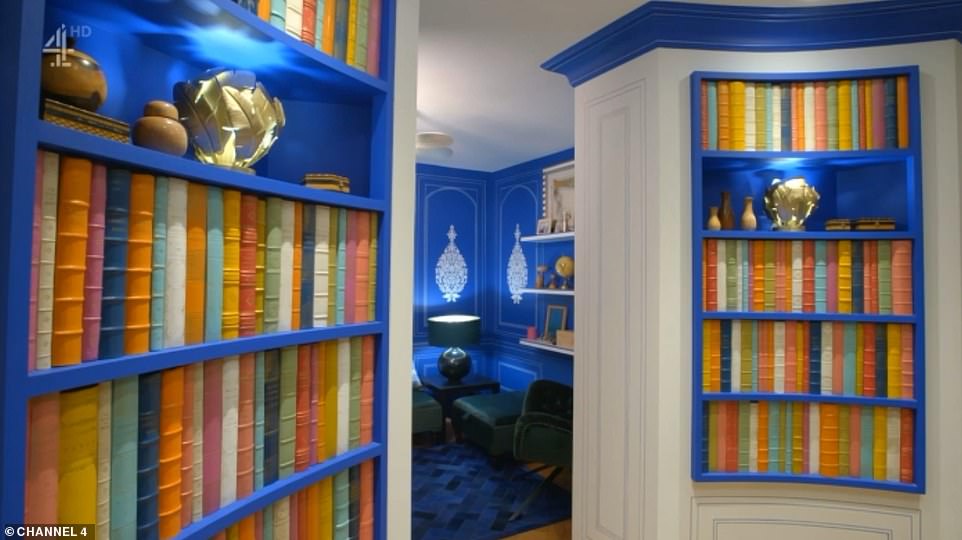 Vibrant: Laurence Llewelyn-Bowen was inspired by a ‘cabinet of curiosities’ and created faux bookcases with display shelves 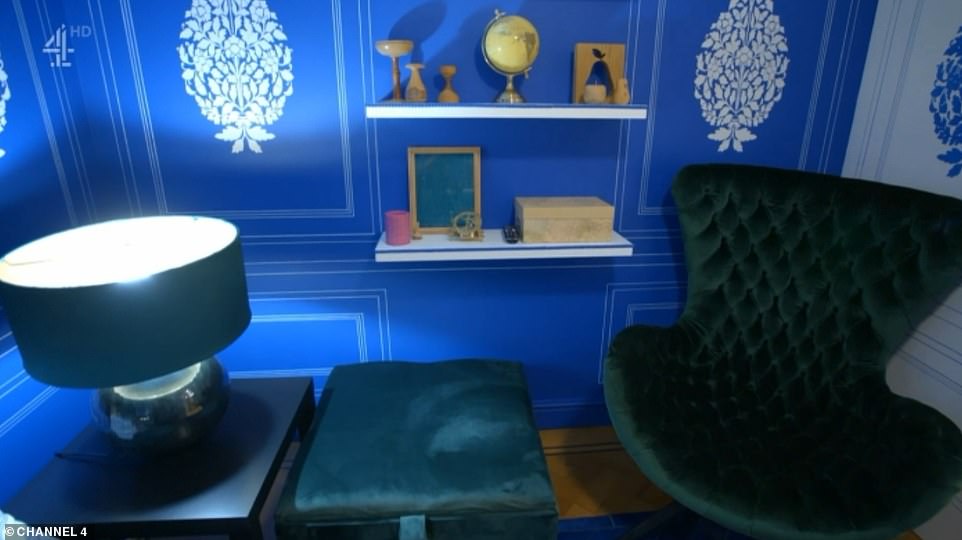 Practical: The designer also wanted the space to be practical and opted for seating with built-in storage (pictured) 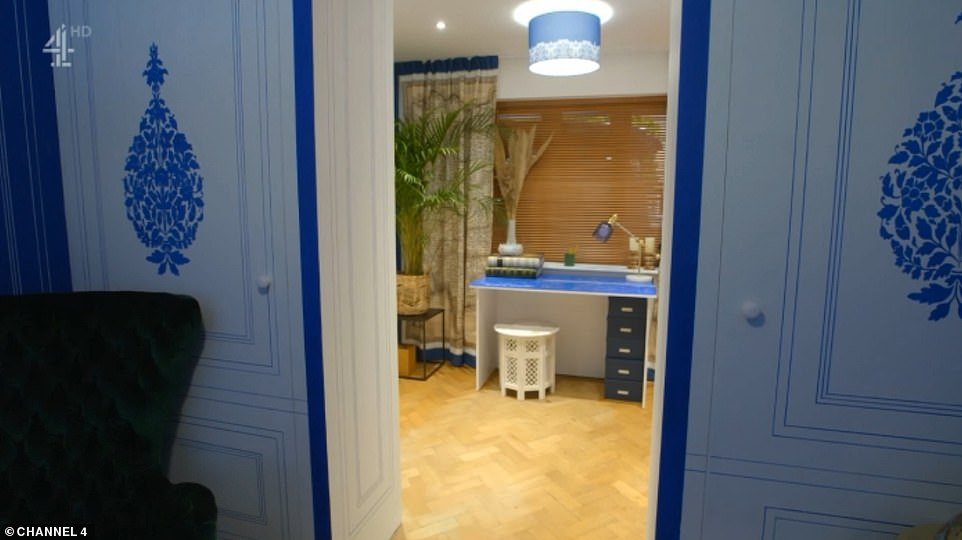 Dual purpose: Half of the room is dedicated to a home office complete with terrazzo desk that matches the walls

One viewer insisted: ‘Of course, @LlewelynBowen pulls it out of the bag yet again with one of his best ones yet. And finally, people that really appreciate it! #ChangingRooms.’

Another posted: ‘Like the blue area very calming looking. best look on new series so far.’

One took a more balanced view: ‘I’m going to be bold and say that I think tonight’s finished rooms are actually very suited to their occupants. Didn’t love all the features myself but I liked more than I didn’t, so that’s a win! #ChangingRooms.’

The converted garage had previously been a space where Hannah could socialise with friends when she was socialising at home. But over the years it had lost its purpose and was rarely used. 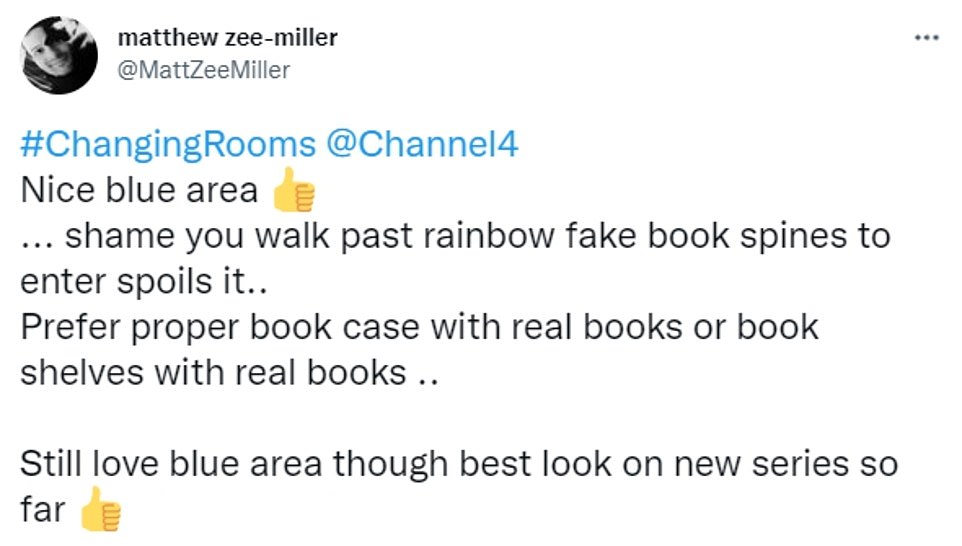 Viewers were divided over the final design, with some comparing it to a ‘Smurf dungeon’. Others said it is one of the ‘best’ makeovers they have ever seen on Changing Rooms

The room was dominated by a large, leather corner sofa and the shelves sagged under the weight of the couple’s personal treasures.

Explaining the new look, he said: ‘Now it is a cool, sophisticated space in which to rest and to study. The intense blue of the walls has created a rich backdrop for Kevin and Ann to display their own cabinet of curiosities. The stencilling provides an aura of calm and unifies the space.

‘Comfortable seating completes the idea of a secret inner sanctum. And cleverly disguised behind the beautiful array of faux book spines, my hidden cupboards and the curved room dividers give Kevin and Ann some much needed storage. 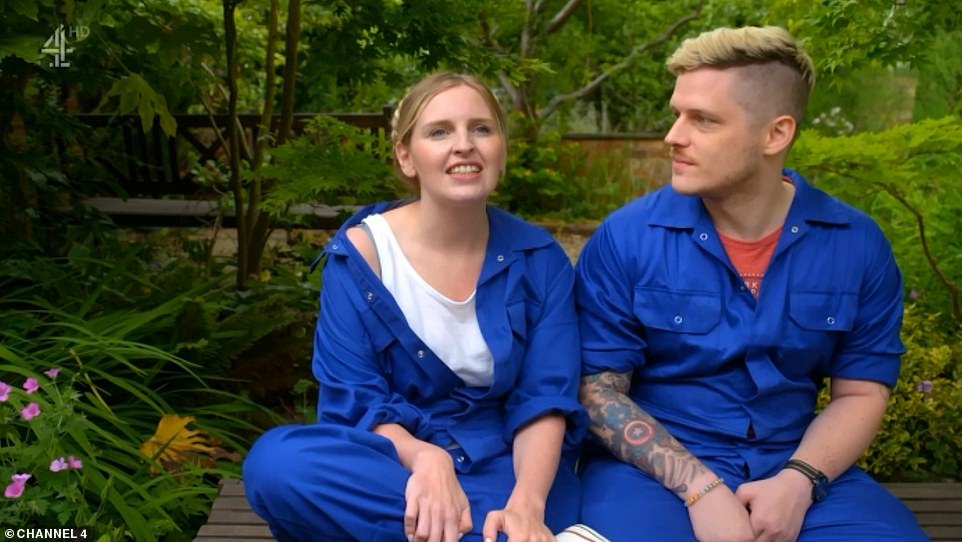 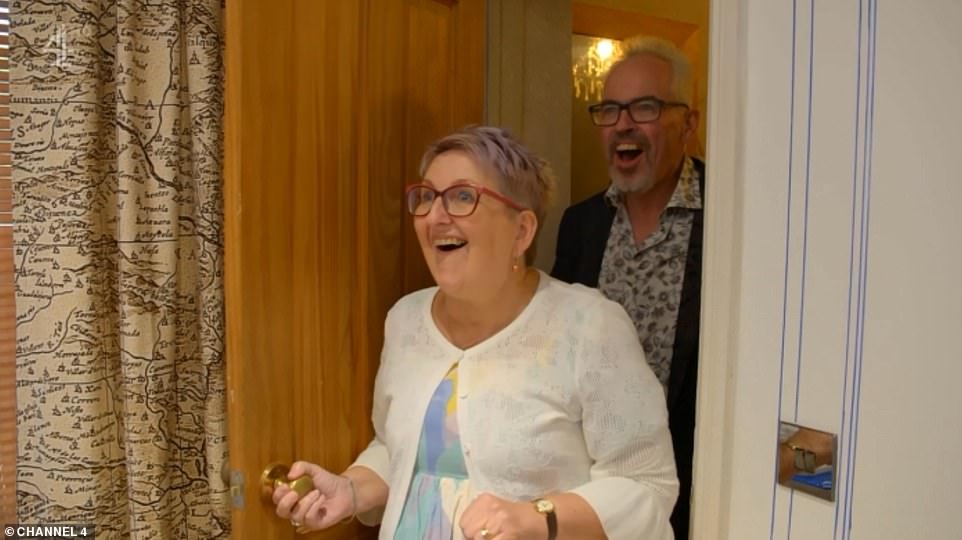 Over the moon: Homeowners Ann and Kevin, pictured, were thrilled with the result, hailing it ‘genius’, ‘brilliant’ and ‘extra’ 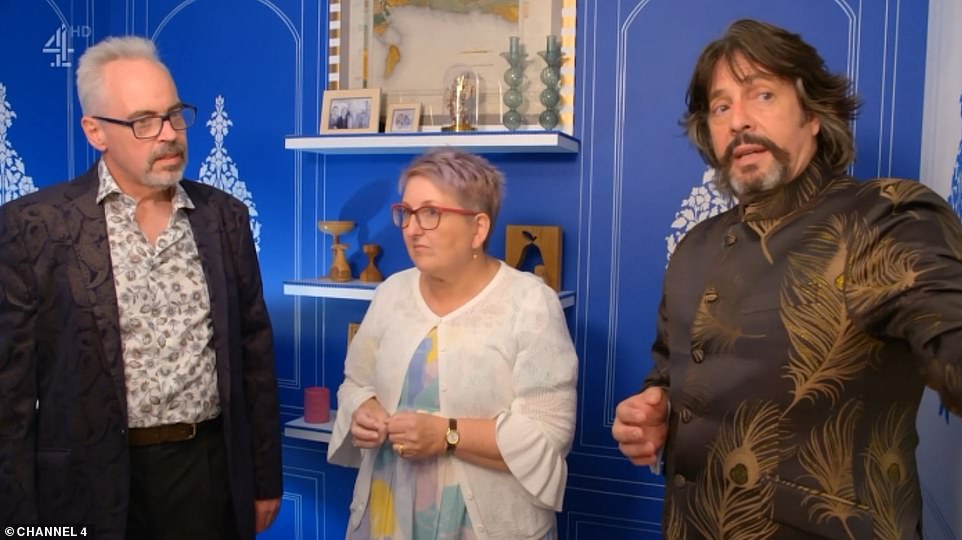 Inspiration: Laurence Llewelyn-Bowen explained to the couple, pictured, that there were details waiting to be discovered

‘The TV disguised as a motif will twist around for viewing. And Kevin’s precious parquet floor has been given some focus with a complimentary parquet patterned rug.

‘Hannah and Chris’ mock terrazzo desktop completes my original concept of a dual purpose space fit for a collector of the weird and wonderful.’

The homeowners were thrilled with the result, hailing it ‘genius’, ‘brilliant’ and ‘extra’.

Ann said: ‘We love it. Amazing. It’s so clever… We never, ever would have been able to do anything like this.

Kevin added: ‘It’s stunning. Breath-taking. The first word that came into my mind when I walked in was “theatrical”. But what else would you expect from Laurence?’