Two emergency flights are set to arrive in South America early next week to rescue hundreds of Australians trapped in Argentina and Peru as countries around the world go into lockdown to stop the spread of the coronavirus.

Australians will be charged about $5000 each for the flights, which have been organised by Australian tour company Chimu Adventures with the help of the Department of Foreign Affairs and Trade. 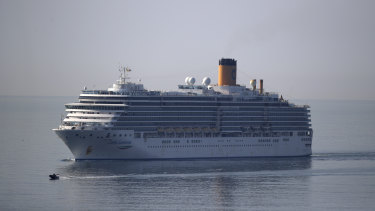 Australians are stuck on the trans-Atlantic cruise ship Costa Luminosa.Credit:AP

But hundreds of other Australians stuck elsewhere in South America are in the dark about how to find their way home after multiple countries in the region imposed strict restrictions on people's movements and banned international travel.

The two LATAM Airlines flights are expected to arrive between Monday and Wednesday next week before taking the travellers to Sydney.

One flight, to Buenos Aires, will rescue Australians in Argentina, including about 150 who have been stuck on the Ocean Atlantic cruise ship. The other will pick up hundreds of Australians in the Peruvian cities of Lima and Cusco.

The $5000 per ticket charge to get on the flight also includes approvals and transport to navigate a country-wide lockdown in Peru.

Australian diplomats in Peru are also expected to be on board the charter flight.

The Peruvian government has banned all flights out of the country that are not officially organised by foreign governments for the purpose of repatriating their citizens.

The Australian embassy in Lima has been in discussions with the Peruvian government about allowing the flight to go ahead and it is still subject to final approvals.

Chimu Adventures co-founder Greg Carter said the company wanted to do what it could to help bring Australians home. He said getting Australians out of other countries such as Ecuador would be more difficult as there were fewer travellers there.

"We can't ascertain the numbers in Ecuador and the logistics of getting them out when they're in lockdown," he said.

Adam Douglas and his partner, Meagan Thomson, have been stuck in the Ecuadorian capital of Quito for a number of days trying to work out how to get back to Australia.

"I would just like some sort of contact from DFAT to be honest," Dr Douglas said. "I've tried to call the local embassy and the phone just rang out, tried to call the emergency hotline with no response at all."

He said both he and his partner were emergency doctors who would like to get back to Australia to help deal with the COVID-19 pandemic.

Melbourne resident Peter Edwards said his daughter was also trapped in Quito with a work colleague. He called on the Australian government to follow the European Union in chartering a flight to Quito to rescue its citizens.

"As a dad, I am naturally very worried for my daughter and her colleague's safety and wellbeing while they are trapped in Ecuador," he said. "I also don't expect a single flight to Quito would be possible, however, a similar humanitarian flight to pick up stranded Australians from several South American locations with closed airports … is not out of the realms of possibility."

Meanwhile, there are up to 35 cruises with Australians on board stuck at sea, with the most serious case appearing to be the Costa Luminosa. Only 39 Australians are on the ship but there have been confirmed COVID-19 cases and dozens sick. Australians were not allowed to disembark in France because there were no charter flights organised back to Australia, so the ship will now sail to Savona, Italy.

There are hundreds of other Australians on ships in Europe, South America and the Pacific.

DFAT said it was working with all cruise lines, ship by ship, to ensure Australian passengers were kept informed and provided with appropriate contact information.

COVID Vaccinations Have Begun — Here’s What to Know