Like most modern romantic interactions, Chrissy Teigen and John Legend’s take place, in part, online for everyone to see.

Sure, for most people these interactions aren’t exactly garnering the attention of a combined 65.8 million followers on Instagram and Twitter. But like everyone else, Chrissy and John are giving onlookers a glimpse into their offline relationship whether they mean to or not.

In fact, there’s a lot to be unpacked from Chrissy’s dry sense of humor and John’s wife-appreciation posts, according to Karen Ruskin, PhD, relationship expert, human behavior therapist, and author of Dr. Karen’s Marriage Manual. Identifying the meanings behind posts created for public consumption is no easy feat. “People guard themselves and present whatever they want to,” says Ruskin. But that doesn’t mean it’s impossible…well, for the experts at least.

Behind all of John and Chrissy’s online banter are more than a few noteworthy takeaways—ones that speak to Chrissy’s trust in John and his devotion to her that you might not have picked up on when you were tapping the “like” button.

Ahead, you’ll find everything you missed: All the tweets, captions, and Insta photos that helped the pros uncover what you’ve always wanted to know about Chrissy and John’s relationship dynamic. 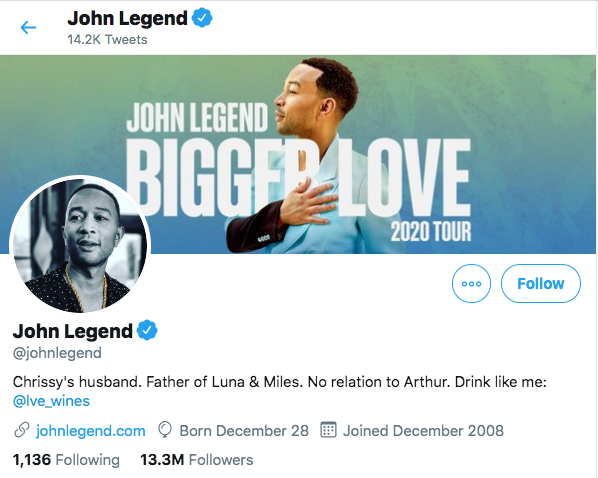 John’s Twitter bio reads: “Chrissy’s husband.” “It really speaks to what he values as his identity,” says Clarissa Silva, behavioral scientist and relationship coach. “He is not just an accomplished musician [and coach on The Voice], his inspiration is drawn from his wife. She is top billing and instrumental to his success,” she adds. So, if you want to get know John Legend, you’d better get to know Chrissy Teigen, too. He’s her husband and proud of that. 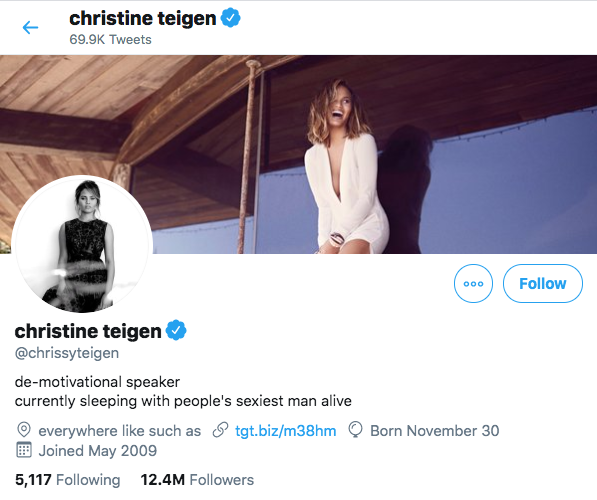 Chrissy identifying herself as the woman “currently sleeping with people’s sexiest man alive” is “her tongue-in-cheek approach to their relationship from a public lens,” says Silva. The model and cookbook author is protective of John. So, when he was named People’s sexiest man alive in 2019 and she anticipated the backlash from internet trolls who wouldn’t agree, she made it funny before they could take jabs at John, says Silva.

Luna and I bought a hamster today. Her name is peanut butter. John is not thrilled, which makes me love her more.

“Chrissy’s her own woman,” says Ruskin. If there’s something she doesn’t like, she’ll push back. When it comes to John, however, she knows he accepts her for who she is. So if he’s “not thrilled” about an impromptu hamster purchase for their kids, she’ll take the risk because she knows, at the end of the day, John will always stand behind her and her choices.

Chrissy is grateful for the family she’s made with John. 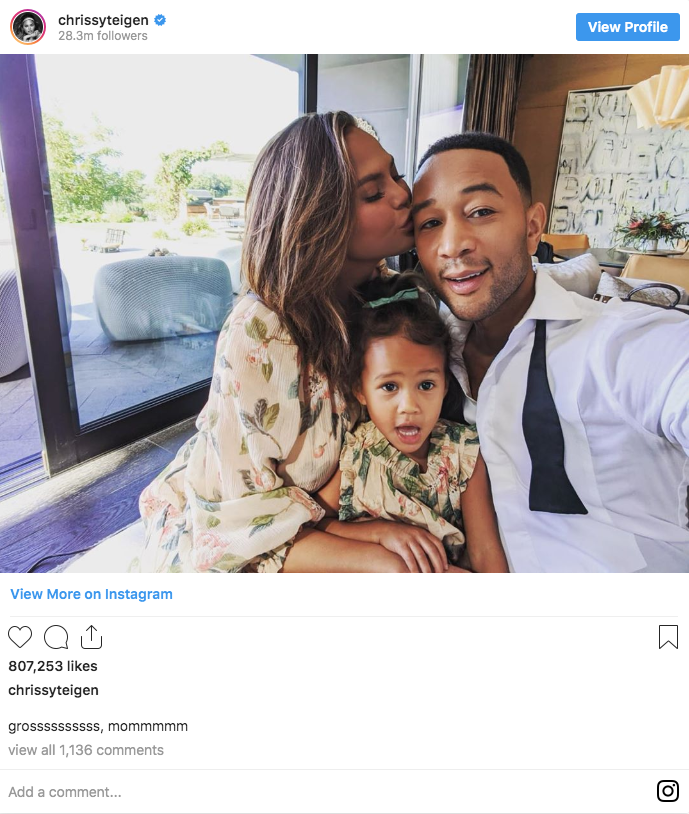 When Chrissy gives John a shout out on social media, it usually involves mention of their children, too, Ruskin noticed. Her photos on social media are typically “relational rather than individualistic,” she adds. And when John posts about his wife, it’s about Chrissy and only Chrissy. This means Chrissy thinks and loves in terms of “us.” (John does, too, but she’s more overt about it.) Posts like these with daughter Luna (and their son Miles, too!) show howproud Chrissy is of the family she’s built with John.

They’re not so different from you and me (you know, minus the $$$ and fame). 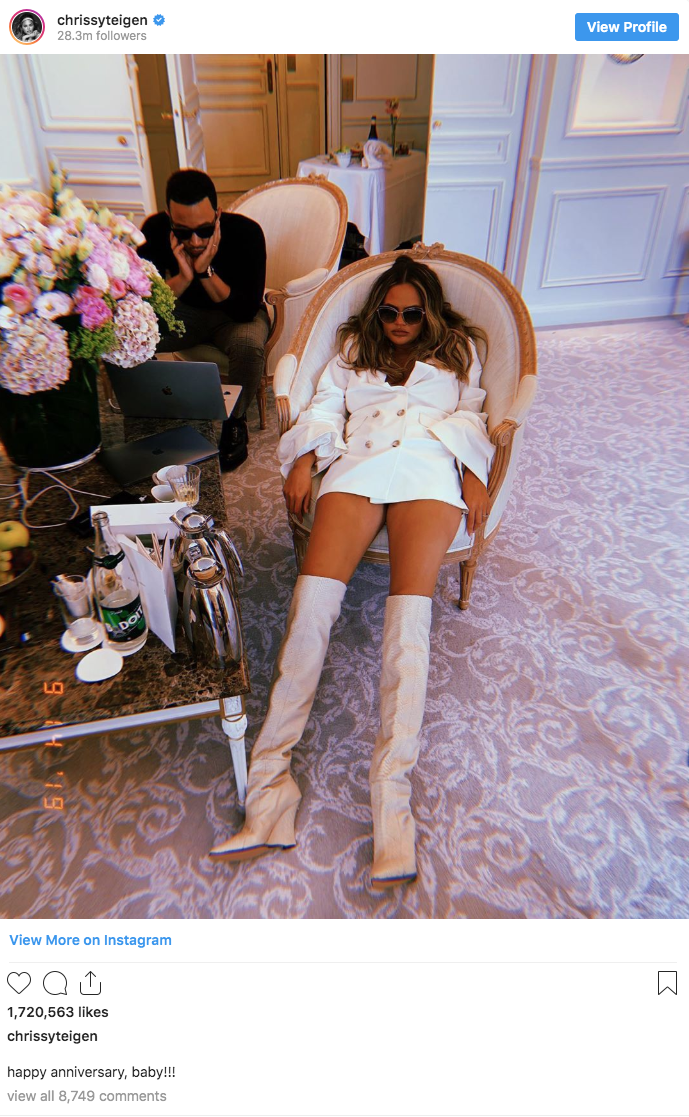 “We often have an idolatrous view of what celebrities’ lives are like,” says Silva. “We often think that it’s all glam all the time. We would expect to see the portrayal of lavish locations or loving photographs of everything to draw out the envy of their relationship.” Here, Chrissy’s intentionally posting a photo where she and John look tired and disconnected for their anniversary. “It’s designed to make them seem more relatable,” Silva adds. They can’t be adorable 24/7, not with kids, jobs, and commitments. There’s no secret sauce to their relationship success. Like everyone else, they’re tired and busy, but they’re still together and that’s a BFD.

They love differently, but they make it work. 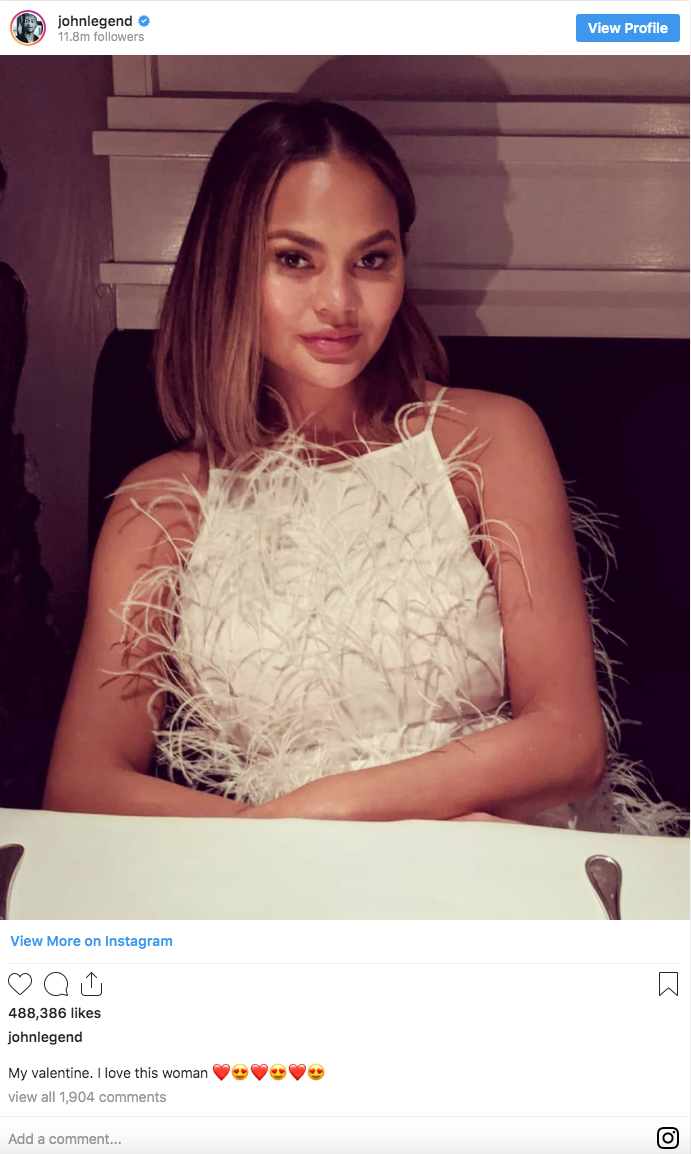 Look at John being all cute and ish. He writes songs for Chrissy that become romantic anthems and posts beautiful photos of her with captions about how much he loves her. This is classic John, says Silva. These public proclamations of love for Chrissy come naturally to him. For Chrissy, not so much.

It’s not that she can’t or won’t. It’s that she doesn’t want to. There’s nothing indicating she isn’t as mushy with John at home and in private. But when it comes to expressing her love in front of their millions of fans, Chrissy “is openly against the portrayal of things that are manufactured or fabricated,” says Silva. She’s not about writing John a love note on Instagram for everyone to see. She’s knows what she has with John is special and she doesn’t’ need anyone else’s approval. Instead, she’ll defend him against the haters and call him a “buttface” at the same time.

McDonald’s fans can get Big Mac and McChicken Sandwich meals for just £1.99