Air ambulance crew told of the moment they had to rush to the aid of a circus performer after he fell from the ‘wheel of death’ in Helicopter ER.

Tonight’s episode of the show, which airs on Really, focuses on star acrobat Khalid, 27, from Yorkshire who plunged into the crowd from a height of about five metres while performing a death-defying stunt on the ‘wheel of death,’ which almost lived up to its name.

His best friend and colleague saw it happen and explains to the paramedics how the stunt went wrong.

‘His hands slid, and he landed over one of the chairs,’ he says. ‘The wheel was spinning when Khalid fell, propelling him towards the crowd where he landed on a member of the audience, luckily breaking his fall.’ 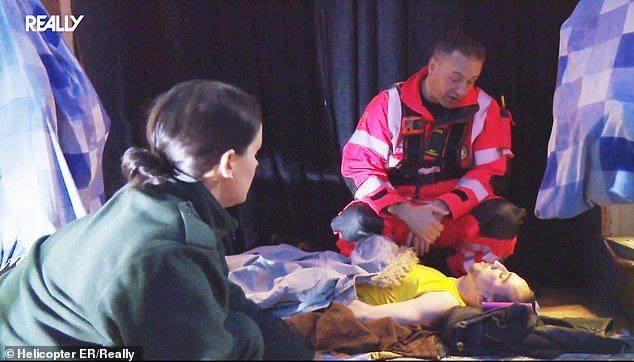 The air ambulance crew rush to see acrobat Khalid, 27, who plunged into the crowd from a height of about five metres while performing a death-defying stunt on the ‘wheel of death,’ in tonight’s episode of Really’s Helicopter ER 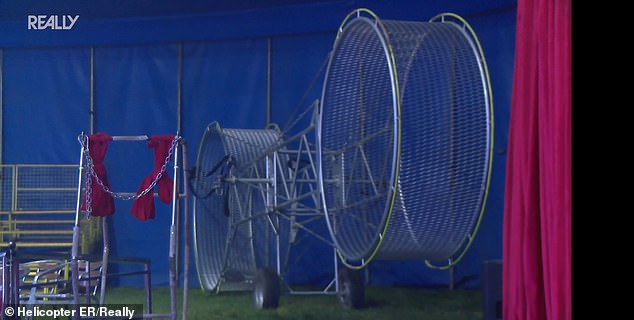 During the episode, Doctor Neil, who is accompanied by paramedics Lisa and Tyrone, take off in the air ambulance and relays the information he’s been given by dispatch to his team.

‘The information we’ve been given at the moment is that a man has fallen from the height of some 25-30 feet, and the circus team who made the call have said that he’s landed directly onto his head,’ he says.

‘At the moment he’s reported as awake and talking, but in view of the nature of the mechanism of his injury, we’ve been tasked with dispatching to this incident.’

Unsure about the extent of their patient’s injuries, the crew make the 15-minute journey to the circus before landing safely. 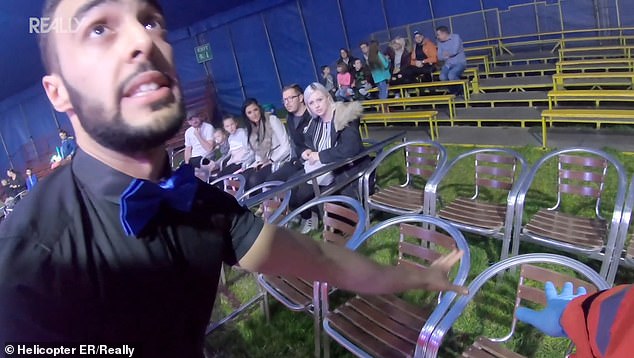 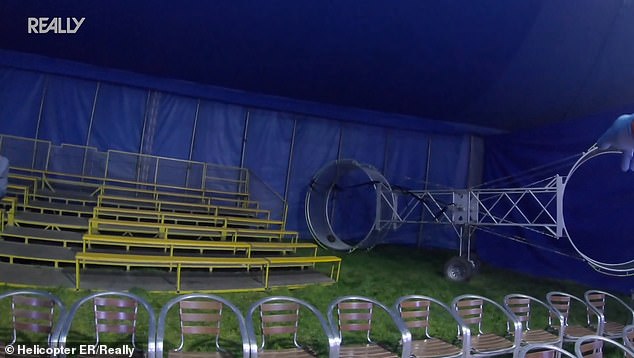 Last year, there were approximately five people around the world that were killed doing the very same act. Pictured, the ‘wheel of death’

Inside the tent the evening’s performance is still going on, but without a second to lose, the crew are taken to their patient’s location, who is already being attended to by a ground paramedic team.

Luckily, the man that Khalid landed on escaped unhurt – and it looks like Khalid has also had a lucky escape, as paramedic Tyrone can’t find any obvious or significant injuries.

‘So I’ve just been inside the ring to have a look at where this chap’s fallen off,’ Doctor Neil explains.

‘He’s been holding onto what’s been described as a very large hamster wheel, that’s suspended about five metres from the floor, and his hands have slipped from the edge of the ring and he’s fallen down to the back.’

Tyrone’s verdict is reassuring, but the decision is made for the ground crew to take Khalid to the local hospital for a check-up. 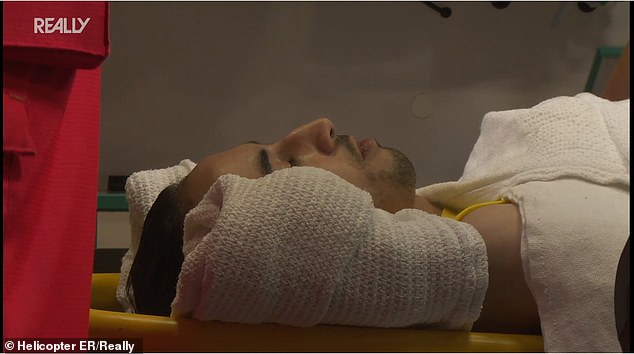 Despite the awkwardness of Khalid’s accident, Doctor Neil admits that Khalid’s injuries appear to be minor

It’s been a worrying evening for the Ring Mistress, who admits there are no safety guarantees when working a high-risk job at the circus.

‘We’re a touring circus, currently in Silsden, our finale act of the show is the ‘wheel of death.’

Khalid tonight had done a trick right at the start at the act, where the wheel is spinning around,’ she says. ‘He actually lost his grip as it went up and he fell into the audience. It’s all a big shock, but the circus can be dangerous and it is a death-defying act.’

I think just last year there were five people around the world that were killed doing this act.’

Despite the awkwardness of Khalid’s accident, Doctor Neil admits that his injuries appear to be minor.

‘The patient at the moment is awake, talking, and orientated, so he’s not demonstrating any signs that he’s clinically unwell and we don’t have any immediate concerns, but he does need to go to an emergency department for an assessment,’ he explains.

Thankfully, after being taken to hospital, Khalid was released after a check-up failed to reveal any serious injuries. He was back on the wheel of death a few days later.

‘We are pretty realistic now’: Swifts prepare for entire season in Queensland hub