Home » Lifestyle » ‘Close to us not having a season’: Mannix grateful for Super Netball’s return

The Melbourne Vixens know they can rely on Emily Mannix to handle the tough defensive roles.

Mannix loves the challenges of taking on the best attackers in Super Netball and she will have her hands full come Sunday when she plays her 50th game in her team's season-opener against Collingwood in Brisbane. 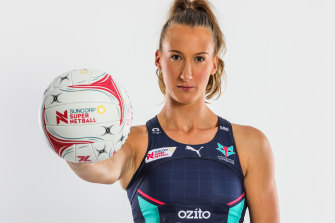 But the Vixens have been calling on Mannix's defensive skills in the battle against COVID-19 this week as the newly appointed vice-captain revealed she was tasked with spraying down the bus seats for trips to and from training.

The Vixens have been in quarantine in Queensland for the past two weeks, and complete their 14-day stint on Sunday with players only leaving their rooms for training sessions.

"It's pretty much we get on the bus, wipe down all the seats – I'm actually the one in charge of that at the moment," Mannix said with a laugh.

"I spray all the seats and then everyone gets on behind me and wipes down their own seat.

"We train, get out and the bus is waiting for us. Then we do the same thing, wipe down the seats and get back to the hotel. At least we get to look around a bit as we are driving."

The COVID-19 pandemic has affected many lives and Super Netball players were displaced as their season was put back multiple times. The recent spike in Victorian cases saw the Vixens and Collingwood follow other codes in rapidly escaping the state for Queensland.

Mannix is a full-time athlete so had to maintain her fitness and her focus at home in St Leonards on the Bellarine Peninsula while not knowing if she would get to play at all in 2020.

"Those first couple of weeks were a bit of novelty," Mannix said. "Our support staff put a lot of effort into helping us train from home and planning for us so when we resumed we would be in good shape.

"I would have days where I would have good motivation and then the next day I would feel terrible and didn’t want to train.

"I'd feel like, 'What is the point?' but I was always hopeful there would be a season. It got very close to us not having one so we are very grateful we can get the season underway and have something to play for this year."

Mannix's 50th is a milestone worth celebrating considering it has taken her a little longer than most to reach as she started her career behind some established stars in the Melbourne defence.

Now she is established among the leading defenders in the competition with Mannix and goal defence Jo Weston making a formidable partnership at the back.

"I lost sight of game 50 with all that's going on," Mannix said. "I feel like I can't celebrate it too early. I love being at this club. Vixens is like a family to me. I love it here. It has taken me about six years to play my 50th but we've got here in the end."

Super Netball's decision to bring in a two-point shot was met with some dismay from players and coaches although Mannix thinks her side's shooters such as Mwai Kumwenda will do well with their outside shots.

"Our goalers are fantastic at it and I have no doubt we will be sweet down that end," Mannix said.

"In defence we have a few ideas about what we can do but the more you over think it, the more likely you will get beaten.

"The luxury is that we play last this weekend so we can watch the other teams and how they do it. Maybe draw on a few things from that."

Mannix and Weston have also been roommates during quarantine and they showed their film-making talents on Instagram posting a hilarious video of some infectious dancing.

"We are one take wonders," Mannix joked.

"Jo is actually very good with editing so we film each other and she puts it all together on her phone.