Some of Australia's biggest resources companies are expected to jostle for gas-drilling rights in Victoria after the state government overturned a long-held moratorium on conventional onshore exploration.

The Andrews government's announcement on Tuesday – three months before a decision was due – was welcomed by gas producers, unions and heavy gas users, such as manufacturers, who had called for the years-long moratorium to be abolished. 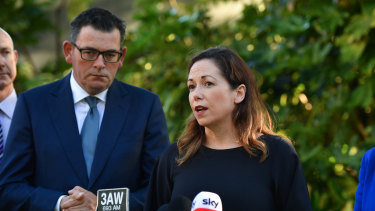 The decision will allow exploration and drilling for gas to commence from the middle of next year.

Premier Daniel Andrews pledged that any gas would first be made available to Victorian households and businesses.

Andrews said extensive consultation had been held with communities and farmers across the state before the decision was made. Natural gas would be explored and extracted under the "highest standards" to protect the environment and communities, he added.

The government also moved to enshrine in the constitution its ban on “unconventional” gas extraction practices, including hydraulic fracturing, or "fracking", and coal seam gas exploration.

Victoria's Lead Scientist Amanda Caples said research had shown there could be up to 830 petajoules in both the west Otways and Gippsland. Victoria uses about 220 petajoules of gas a year.

Companies that wanted to drill for gas on private land would have to strike agreements with landholders, Dr Caples said.

Beach Energy, an ASX-listed gas producer backed by billionaire Kerry Stokes, is one company that holds permits in the Otway Basin that traverses Victoria and South Australia.

Cooper Energy runs a $350 million gas field off the coast of Victoria and has been carrying out further exploratory drilling offshore in the Otway Basin.

She said they would still need to conduct analysis, gather geological and scientific equipment and gain environmental approvals before they could begin drilling. 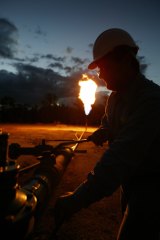 “This industry is not something that starts overnight, there's a lot of work that goes into it,” Ms Symes said.

"This announcement signals to the private sector that this is a safe location to invest in," he said. "It's a powerful signal, it will reverberate through the industry and people will start to get the wheels moving."

South Gippsland farmer Fergus O'Conner, a beef cattle producer and member of Farmers for Climate Action, said it was essential to look after agricultural land and not put it at risk with gas extraction.

“You wonder why the government has a community consultation period, when they do what they want anyway," Mr O'Conner said. "They ought to be held accountable."

Environmental groups attacked the decision to lift the ban, while the Greens said an onshore gas industry could imperil waterways and farmland.

"It is truly appalling that the Victorian Labor government is trying to pull the wool over our eyes by making this disastrous announcement in the middle of a pandemic," Victorian Greens environment spokeswoman Ellen Sandell said.

"Opening up more drilling for gas is terrible for our farmers, environment and climate."

"It is critical the Premier come clean with Victorians on how he plans to reduce Victoria's greenhouse emissions in line with limiting global warming to 1.5 degrees," Mr La Nauze said.

Ben Davis, state secretary of the Australian Workers Union, said the state's conventional gas drilling moratorium should never have been imposed in the first place, and its removal was "well overdue".

"It's a known technology and a safe technology, so I'm really heartened by the government's announcement today," he said.