Consumer confidence has plummeted to its lowest level since Australia's last recession as shoppers become panicked by the economic fallout from the coronavirus pandemic.

The ANZ/Roy Morgan weekly measure of consumer sentiment tumbled 27.8 per cent through the past seven days to sit now just above its all-time low recorded in 1990.

It is 17 per cent below the bottom reached during the global financial crisis in October 2008. 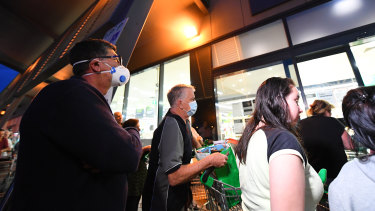 Consumer confidence has fallen to its lowest level since Australia’s last recession as people react to the worldwide coronavirus pandemic.Credit:AAP

All measures, including current financial conditions and current economic conditions, stumbled. The biggest fall was on the question of whether it is a good time to buy a major household item which dropped by 37.2 per cent.

"The increasingly negative news about the impact of the coronavirus pandemic in Australia has had a dramatic impact on consumer sentiment, with confidence showing its biggest ever fall since the survey moved to a weekly basis in 2008," he said.

"Consumer confidence has been lower than this level, but only just and only during the 1990-91 recession."

It follows a phone hook-up overnight of G20 finance ministers and central bank governors, including Australian Treasurer Josh Frydenberg, at which the International Monetary Fund warned the coronavirus pandemic was likely to have a bigger economic impact than the global financial crisis.

Backing the various measures taken by nations including Australia to protect their economies, IMF managing director Kristalina Georgieva said all countries had to work together to protect people and limit the economic damage facing the world.

"First, the outlook for global growth: for 2020 it is negative – a recession at least as bad as during the global financial crisis or worse," she said.

"But we expect recovery in 2021. To get there, it is paramount to prioritise containment and strengthen health systems – everywhere. The economic impact is and will be severe, but the faster the virus stops, the quicker and stronger the recovery will be."

Mr Frydenberg said the IMF had noted that there were significant capital outflows from emerging economies which were now creating instability in those financial markets.

The situation facing the global economy was increasingly serious. "The expectation is that global growth will be negative this year," Mr Frydenberg said.

"All governments agreed that coordinated global fiscal action is required, including providing increased liquidity to financial markets and sharing experiences in domestic markets.

"There is a real sense of urgency which is being reflected in the large economic support packages being released."

The comments came as the Dow Jones fell another 3 per cent in overnight trade. It is now on track to record its worst quarterly performance since the depths of the Great Depression.

The Commonwealth Bank's composite index of the manufacturing and services sector, released on Tuesday morning, points to the problems facing the Australian economy.

The index dropped almost 10 points to sit at 40.7, its weakest reading since it was started in 2016. Any reading above 50 points to economic expansion.

Most of the fall was due to a sharp fall in services activity.

"The manufacturing sector may be faring a little better. But the leading indicators are flashing warning signs."

Mr Blythe said there had only been a "muted" pullback in measures of employment at this stage, but was now also in negative territory.

UK lockdown: Can I go for a walk in the countryside?