Tiger Woods felt strong and fit enough to compete for another green jacket. He could sense the adrenaline starting to flow, along with a strange sensation. He was grumpy.

Instead of flying to Augusta National for the Masters this week, he was home in Florida, where the only competition for a green jacket was a putting contest with his 11-year-old son, Charlie.

“I felt energetic, I felt really alive and wired and kind of irritable, and I didn’t know what was going on,” Woods said in an interview with GolfTV. “And I realised it was Sunday morning. … And my body, subconsciously, I knew I was supposed to be getting ready to leave and start playing the Masters.

The interview recorded on Wednesday was Woods’s first since the final round of the Genesis Invitational in February. Woods chose not to play the next four tournaments because his back was not ready. And then golf was shut down along with other sports by the Covid-19 pandemic.

He has been at home with his two children and girlfriend, riding bikes for exercise, occasionally playing golf at The Medalist Club and having putting contests with Charlie, with the green jacket going to the winner.

That’s another reminder of these times. This will be the longest a Masters champion has been able to keep golf’s most famous piece of clothing at home. Woods is not required to leave it in his locker at Augusta National until he returns to defend. And that won’t be until November at the earliest.

“This is not the way that I would’ve wanted to keep the jacket for a longer period of time,” Woods said. “I wanted to get out there and compete for it and earn it again, like I did in ‘02. But it’s not a normal circumstance, it’s not a normal world. It’s a very fluid environment and it’s very different for all of us. Fortunately, we potentially could have a Masters in November and play it then. I guess I’ll be defending then and hopefully that all comes about.”

In the meantime, he started playing for the jacket with Charlie at the start of the year, wanting to take advantage while the jacket was at home.

“I don’t know if I’ll be able to defend, I don’t know if I’ll be able to win again, but let’s just take a moment to have a little fun with it,” Woods said. “Occasionally, it’s gone into his closet. Primarily, it’s stayed in mine. But the fact he’s been able to earn it off me — because there are no wins that are given in this family — it’s been fun to see him tease me about beating me and being able to wear the jacket and have it in his closet where he says it belongs.”

Woods would rather let 95 other players try to take it over 72 holes at Augusta National. That will have to wait. 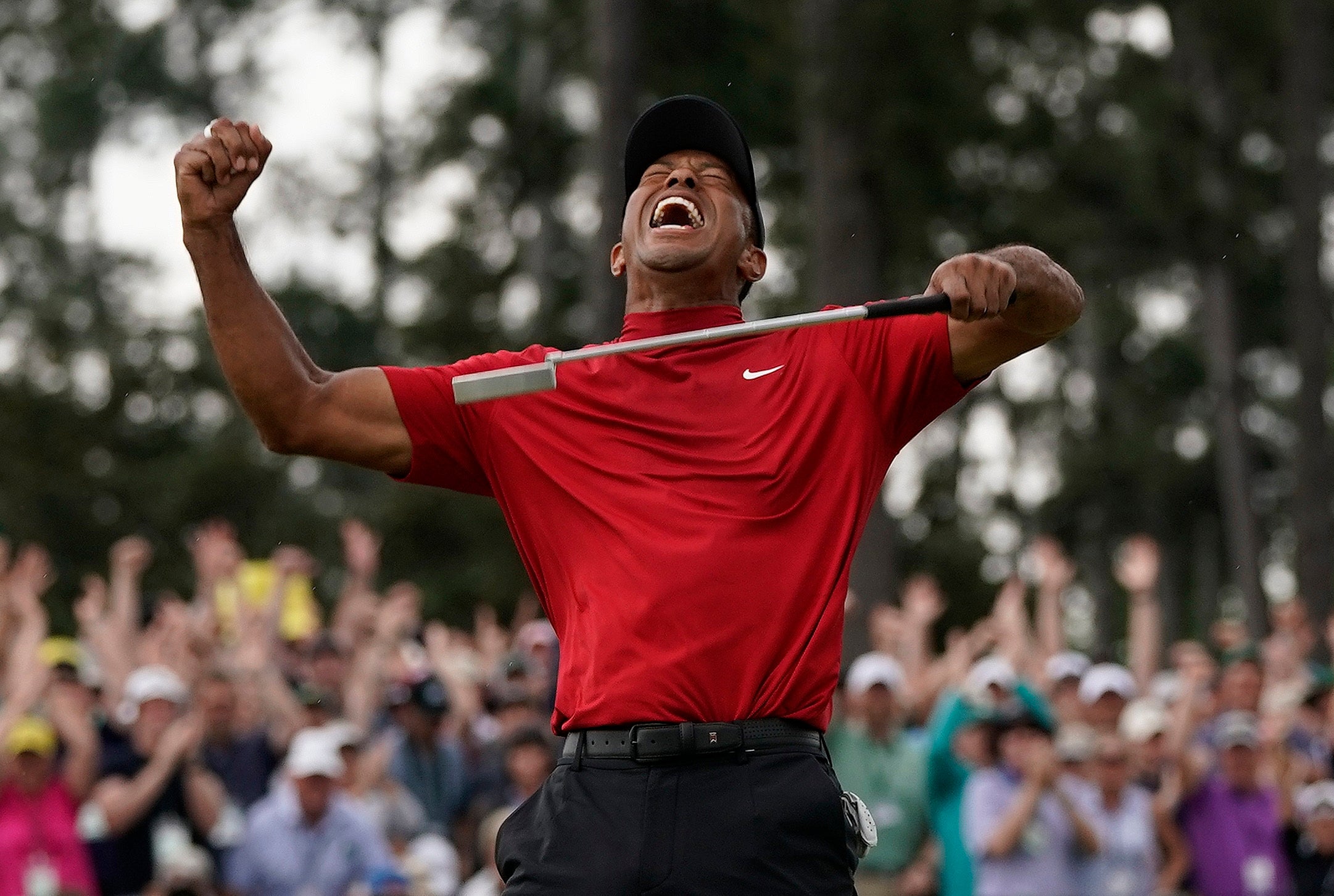 The time off has been helpful in one regard. Woods, who won the ZoZo Championship in Japan late last year for his record-tying 82nd victory on the PGA Tour, was off to a slow start this year. He didn’t seriously contend at Torrey Pines and finished last at Riviera. And then he shut it down, his back not feeling quite right as he resumes his career following four surgeries, the last one to fuse his lower spine.

“Night and day,” he said about the difference in how he feels from the last time he played on 16 February in Los Angeles. “I feel a lot better than I did then. I’ve been able to turn a negative into a positive and been able to train a lot and get my body to where I think it should be at.”

He still struggles to think about what he should be doing this week: a flight to Augusta on Sunday to practice and help hand out trophies in the Drive, Chip and Putt National Finals; the noise and bustle of practice rounds on Monday and Tuesday, the Masters Club dinner on Tuesday night for only champions, the Par 3 Tournament with his kids as caddies on Wednesday, and then quiet of the eve of the Masters as he tries to build towards the final round of his favourite tournament.

He stuck to one tradition — the Champions Dinner.

Woods tweeted a photo of him having his dinner Tuesday night, wearing the green jacket, with his girlfriend and children and food that he wants on the menu — steak and chicken fajitas, sushi and sashimi, milkshakes. Also on the table were cupcakes.

Whenever he gets around to hosting the real dinner at Augusta National, it probably won’t end the same way. There was a food fight at home.

“It got a little bit interesting at the end, a little ugly, where icing was flowing across people’s hair and face, and so we had a little bit of fun at the end,” Woods said. “I did take the jacket off. This jacket cannot get any cupcake on it.”

Why You're Suddenly Remembering Your Dreams in the Morning

How to get rid of visceral fat: Salmon contains DHA which could help burn the belly fat