Inseparable mother, 53, and her daughter 35, reveal how they tied the knot with their fiancés in a shared ceremony – and even went on HONEYMOON together

A mother and daughter bffs are so close they actually shared their wedding and honeymoon – as a happy foursome.

Aisling Cislikauskiene, 35, and her mother Trisha Duffy, 53, from Limerick, have always been ‘more like best friends than mother and daughter’.

But the familial bond was made even stronger when the pair decided to tie the knot with their fiancés in a shared ceremony and jet off on a dream honeymoon together.

Both couples excitedly starting to plan separate weddings before Trisha suggested the a joint ceremony.

Aisling and Marius were originally against the idea because they didn’t want to ‘gatecrash’ Trisha and Joe’s big day, but they soon changed their minds after realising how special it would be to share it. 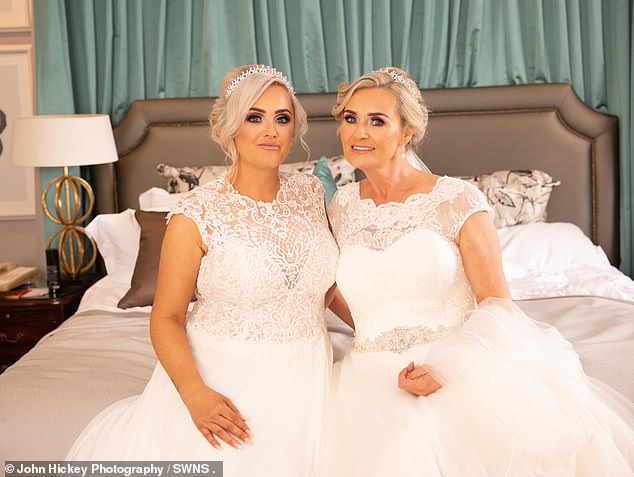 Mother and daughter duo Trisha Duffy, 53 (left) and Aisling Cislikauskiene, 35, shared their wedding ceremonies, receptions and honeymoon after they got engaged three years apart from each other

Trisha had already booked and planned most of her wedding with Aisling by her side, approving all of the finer details, so it was a ‘no brainer’ to roll it out and do a two for one.

The foursome tied the knot on 14th February 2020 – Valentine’s Day – at Castletroy Park Hotel in Limerick, in front of 160 guests.

Aisling, a hairdresser, said: ‘When mother first suggested that we have a joint wedding, I thought she was joking!

‘Marius and I told her not to be silly and said we wouldn’t want to gatecrash their big day. But the more we spoke about it, the more of a good idea it seemed. 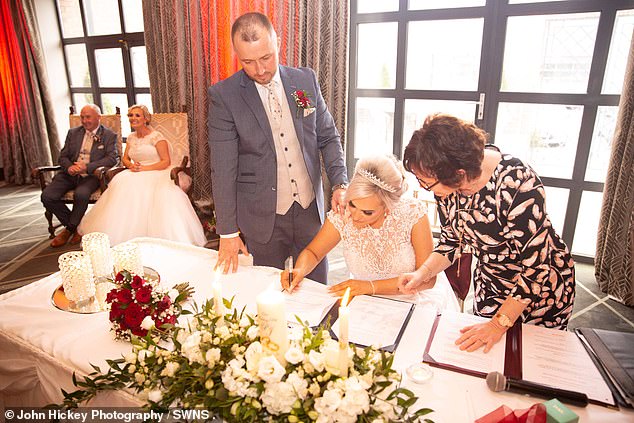 The mother and daughter tied the knot with their beaus on Valentine’s Day in a joint affair (pictured: Aisling signing the wedding registrar)

‘We get on so well as a foursome – and are always going out for dinner and spending weekends together – we ended up thinking: “Why not?”

‘We knew we could both save a lot of money by having one big wedding and it would be easier for all of our guests coming to one event – rather than two.

‘It was the best day ever and it felt so special to share it with my mother. It made it all the more special.

‘We are more like best friends than mother and daughter. I wouldn’t have changed a thing about it.’ 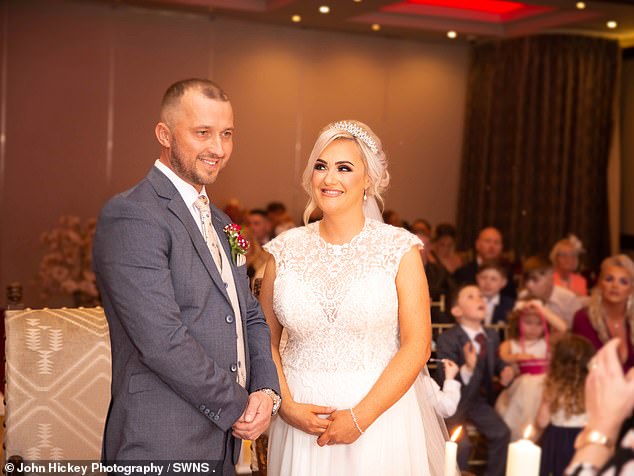 Aisling married Marius, 38, after he proposed to her in front of her mother and sisters in 2016 (pictured on their wedding day)

Trisha, Joe, Aisling and Marius were enjoying dinner at the Castletroy Hotel restaurant in Limerick, Ireland, in October 2019, when they first discussed having a joint wedding.

Aisling said: ‘At first we were unsure whether to go ahead with it because we didn’t want to ruin their big day.

‘They had spent so much time planning it and making it perfect – we didn’t want to jump in and change any of that.

‘Marius and I initially thought we should have two separate weddings, but we went home from the meal and thought about it and it started to really make sense.

‘We called my mother up the next morning and said: “Let’s go for it”!’ 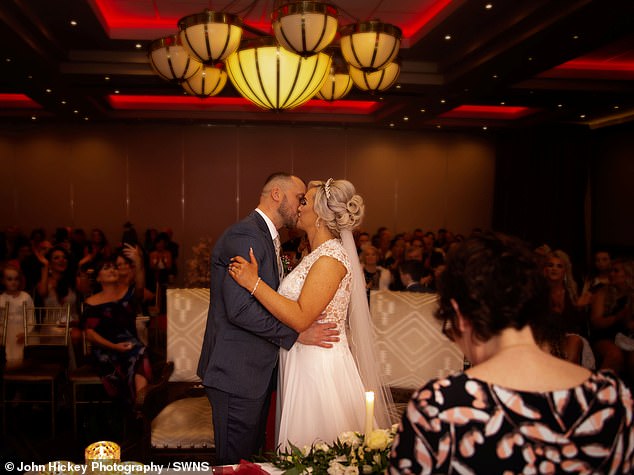 For Aisling, sharing her wedding with her mother made perfect sense, as they already shared so much (pictured during a dance with Marius during the wedding reception)

Trisha, a carer, from Limerick, said: ‘Aisling has been there with me since day one – from the surprise engagement in Amsterdam to the amazing hen do she gave me, and all the planning for my special day.

‘Joe and I decided to ask Aisling and Marius to join our wedding, because why not? I would do anything for my children – they’re my world.’

Aisling and Marius met in Icon nightclub in Limerick in 2012.

The pair fell in love straight away and now have two children together, Amelia, four, and Isabelle, three.

Single mother Trisha met her new partner, Joe Fitzgerald, 71, in June 2017 when they were introduced by a friend.

They went on their first date to Spanish Point beach in County Clare, and fell in love instantly.

He popped the question in January 2019 while they were all on holiday in Amsterdam.

‘We’d enjoyed planning her wedding together and fussing over the details – like the colour scheme and favours – and agreed on everything. It was so exciting to be doing it together.’

The mother and daughter both have the same taste and Trisha was delighted that Aisling would be a big part of the day she had put so much hard work into already. 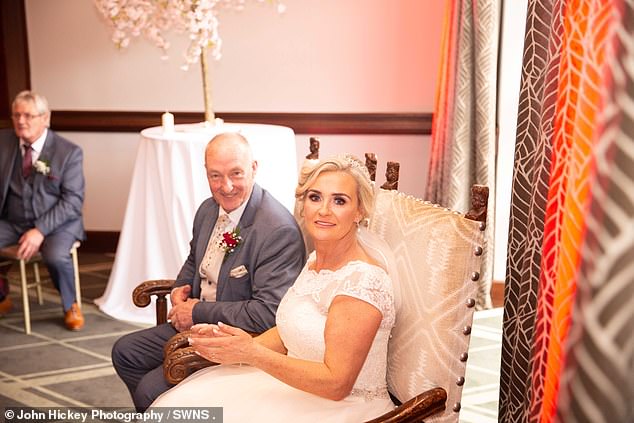 In order to surprise their guests, the couples pretended the wedding was not a joined event, but only Trisha and Joe’s (pictured) big day

As well as avoiding stressful months of organisation, Aisling wanted to have her mother at her side on the ‘biggest day’ of her life.

Aisling said: ‘There’s no one else I’d rather share such a special moment with.

‘Mum and I always do everything together – so to be there, beside each other, on the biggest day of our lives made perfect sense.’

The happy couples couples booked a joint ceremony for the 14th February 2020.

They decided to keep the double celebration a secret from their friends and family – instead claiming it was just Trisha and Joe’s big day – to surprise guests.

Aisling said: ‘Everything was already planned, so I just had to find my perfect dress. 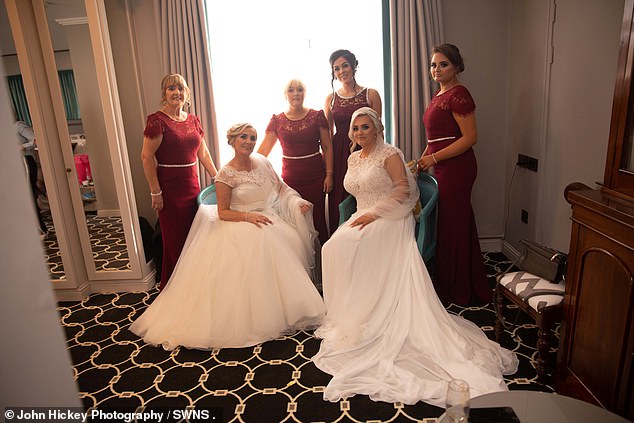 The mother and daughter duo even shared their bridesmaid, all dressed in beautiful red gowns for the occasion (pictured)

‘One day, mum and I were out picking up her dress and we had a spare half hour.We joked that I should try a dress on, and I refused at first.

‘But then I did, and it just so happened that the first dress I tried on was my perfect gown! We were so happy – we walked home together holding our dresses!

‘What’s even more amazing is the fact that when I visited my psychic medium, Elaine Maher, in 2019, she told me there was going to be a double wedding.

‘One of my sisters got married soon afterwards and then my mother got engaged, so I thought that was it. Little did I know it would be mum and I!

Trisha added: ‘We decided to keep our joint wedding a secret from all the guests – we told only the groomsmen and bridesmaids, and Marius’ parents as they had to fly across from Lithuania.

‘But nobody else knew what was going on. I had Aisling’s dress, shoes and jewellery in my house, and even though I slipped up a few times, no one ever noticed.”

The duo soon realised that due to their closeness, they shared most of the same friends anyway, meaning the guest list remained very similar. 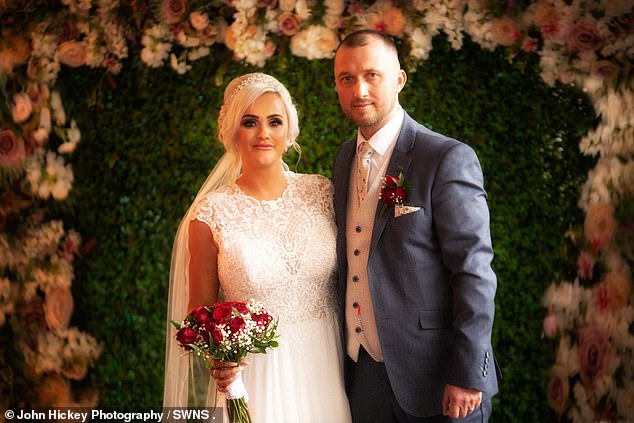 After their joint wedding, the foursome went on the same honeymoon, a cruise in Spain (pictured: Aisling and Marius on their wedding)

Aisling said: ‘The funniest part was the top table – everyone there was exactly who we wanted, so everything leading up to the big day was smooth sailing.

‘Not once did we have a different opinion or an argument about anything.’

On the day, Trisha walked down the aisle towards Joe – and she was closely followed by Aisling, who had been hiding away in a separate room before Marius popped up.

Guests were stunned, but delighted at the double wedding and Aisling and Trisha claim the day was ‘absolutely perfect’.

Aisling said: ‘Mum and Joe went in first, and when they had finished they asked everyone to stay, as she had a surprise.

‘And then in I walked – nobody had suspected a thing! They were all absolutely shocked, but so thrilled for us. It honestly was the best day of our lives. It was absolutely perfect.

‘What could have been a very stressful occasion was easy and thoroughly enjoyed by everybody who was there.

‘Any pre-wedding nerves melted away as I followed my mother up the aisle and having her by my side was so poignant. She’s always been there for me throughout my whole life.’

The foursome then headed off on a joint honeymoon – on a week-long cruise around the Spanish Islands.

Aisling said: ‘I can’t wait for the future. I keep thinking about all the anniversaries to come and get so excited.

‘I’m so glad that as well as having an amazing husband, I’ve also become even closer to my mother. I didn’t know that was possible.’

Construction worker Marius said: ‘In my speech, it was so hard to put into words the appreciation, not only for Aisling, but for Joe and Trisha too.'”I had been waiting for that day since I met Aisling, and it was so special..’

‘When Aisling appeared and walked down the aisle, I never thought people were going to stop clapping! Everybody was so happy.’