January signing Ighalo again showed why his shock acquisition in January may yet prove to be shrewd business with two smart finishes to book a tie with Norwich at Carrow Road later this month.

The 30-year-old now has three goals from just two starts and he overshadowed a reunion with United’s all-time leading goalscorer Wayne Rooney at Pride Park.

“I don’t care what anyone says. We want to keep the momentum going and make sure we do great this season.”

Rooney had his name chanted throughout by the thousands of away fans and came close with two fine free-kicks.

But from the moment left-back Luke Shaw’s deflected opener flew in the Premier League side were able to cruise into the last eight.

United have won the FA Cup 12 times – one behind Arsenal’s record haul – while Derby have now played in six fifth-round ties since 1999 and failed to reach the quarter-finals on each occasion. 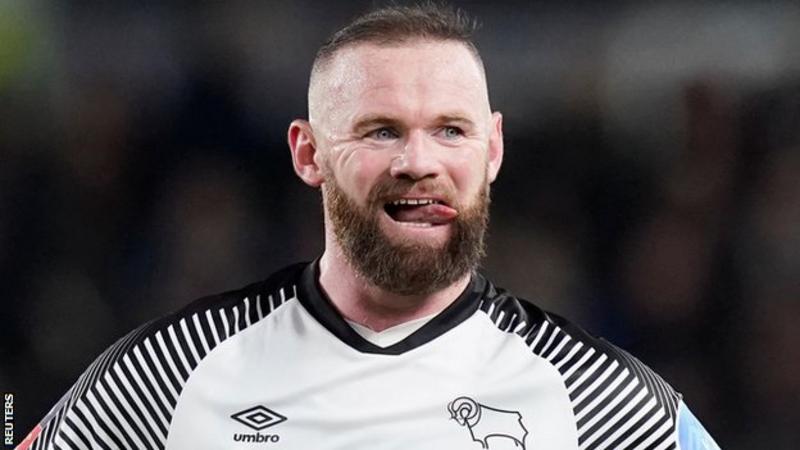 Rooney scored 253 goals for Manchester United before leaving in 2017 and has still never scored against them throughout his career.

The 34-year-old twice went close from free-kicks though, twice denied by excellent saves from Sergio Romero.

Rooney, who led his new side in a pre-match huddle, has moved from the rampaging teenage striker who was compared to Pele at his 2004 peak to a deep-lying midfielder who started the last time United won this trophy in 2016.

For Derby he was in a similar midfield role, shielded from too much running duties by the youth of Max Bird and Louie Sibley alongside him. The duo have a combined age of just 37 and were toddlers when Rooney was announcing himself on the world stage.

Despite a lack of mobility Rooney still remains an influence. Not only were his two free-kicks a threat, he was at the heart of their two other best second-half chances.

First, a sweeping 50-yard crossfield pass found Jayden Bogle, and his cross was headed wide by Martyn Waghorn. And then an even better ball from inside his own half released Rams sub Jack Marriott, but Romero was once again equal to the effort.

“Everyone loves Wayne, all the supporters at Manchester United appreciate what he did,” said United boss Ole Gunnar Solskjaer.

“He played well. He shows class and sometimes he has too much time on the ball for my liking.”

Rooney can now turn his attentions towards helping Derby up the Championship table – although a play-off push looks ambitious at this stage.

Solskjaer – twice an FA Cup winner as a player – has now stitched together a nine-game unbeaten run to move within sight of a place at Wembley and potentially a place in the Champions League.

January signing Bruno Fernandes was again clearly a step above, a constant threat at the top of their midfield, while Shaw had an excellent game at full-back.

He hit the fortuitous opener after Fernandes had a shot blocked, volleying down into the ground. The ball appeared to take a touch off the back of Jesse Lingard and loop over the head of Rams keeper Kelle Roos and in.

Another driving run from Shaw then saw him pick out Ighalo inside the area and the former Watford man got the better of two half-hearted challenges from Craig Forsyth and Max Lowe to poke home.

Shaw had a shot saved by Roos in the second half after fine play from Fernandes, and Ighalo lashed his second into the roof of the net after his initial shot was blocked to seal the win.

“When you get strikers in you want them to be happy and confident,” Solskjaer said.

“Ighalo has come in here and of course we still have a few injuries and it is great for us to have Odion to call upon. He is a different striker for us and scores some good goals, there are not many who could dig that one out for his first.” 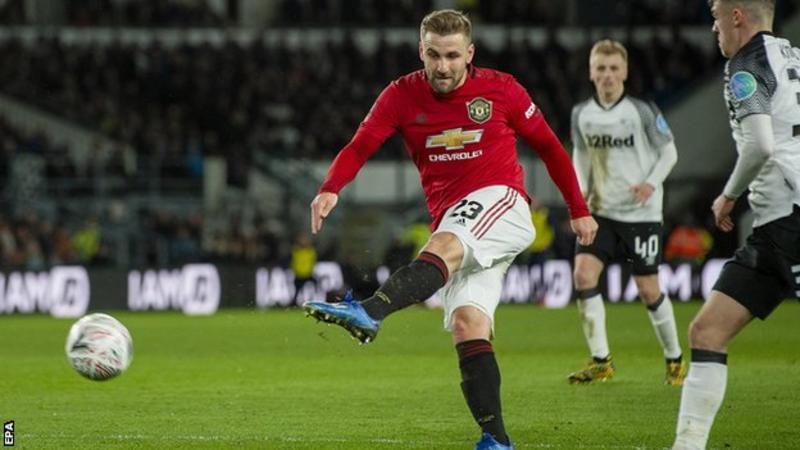 Nine in a row – the key stats

Derby host Blackburn Rovers on Sunday afternoon (15:00 GMT) in the Championship while United are at home to rivals City in the Manchester derby, also on Sunday (16:30 GMT).

Brandon Williams (Manchester United) is shown the yellow card for a bad foul.

Jayden Bogle (Derby County) wins a free kick in the defensive half.

Attempt saved. Wayne Rooney (Derby County) right footed shot from outside the box is saved in the top left corner.

Jason Knight (Derby County) wins a free kick in the attacking half.

Attempt missed. Odion Ighalo (Manchester United) right footed shot from the centre of the box is high and wide to the right. Assisted by Jesse Lingard.

Attempt missed. Wayne Rooney (Derby County) left footed shot from outside the box is high and wide to the left. Assisted by Jason Knight.

Attempt missed. Juan Mata (Manchester United) left footed shot from the centre of the box misses to the right. Assisted by Anthony Martial.

Jesse Lingard (Manchester United) wins a free kick in the defensive half.

Attempt saved. Jason Knight (Derby County) right footed shot from outside the box is saved in the centre of the goal. Assisted by Graeme Shinnie.

Attempt missed. Andreas Pereira (Manchester United) left footed shot from outside the box is close, but misses to the right. Assisted by Diogo Dalot.

Attempt missed. Jesse Lingard (Manchester United) left footed shot from the centre of the box is close, but misses to the right. Assisted by Juan Mata.

Attempt saved. Jack Marriott (Derby County) right footed shot from the right side of the box is saved in the bottom left corner. Assisted by Wayne Rooney.

Attempt missed. Diogo Dalot (Manchester United) left footed shot from the right side of the box is high and wide to the left. Assisted by Andreas Pereira.

Max Lowe (Derby County) wins a free kick in the defensive half.

Attempt missed. Juan Mata (Manchester United) left footed shot from the centre of the box is high and wide to the left. Assisted by Odion Ighalo.

Attempt missed. Andreas Pereira (Manchester United) right footed shot from the right side of the box is high and wide to the left. Assisted by Diogo Dalot.

Diabetes type 2 warning: ‘Normal’ amount of times to pass urine a day – are you at risk?