Couple create provocative dinner party game designed to spark meaningful conversations on everything from the gender pay gap to national borders (so, are YOU brave enough to try it with your friends?)

Most couples might shy away from difficult conversations on nationalism, adultery or the gender pay gap in a bid to keep the peace.

But not so Kenzo Onumonu, 29, and Georgia Gibbs, 25, of Tooting, south London, the creators of Forty: a provocative dinner party game designed to get people talking.

Forty consists of a deck of 40 cards, each printed with a prompt intended to spark meaningful, if challenging, discussions between people.

‘We are big believers in having constructive, sometimes uncomfortable, debate if it leads to more understanding of different perspective,’ Kenzo explained in an interview with FEMAIL. ‘The cards try to follow that pattern.’ 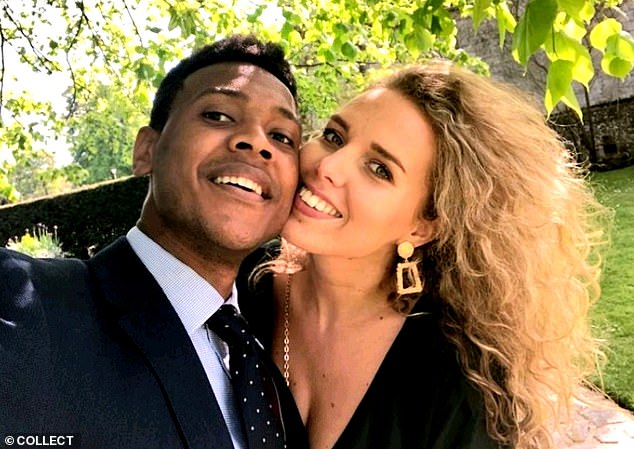 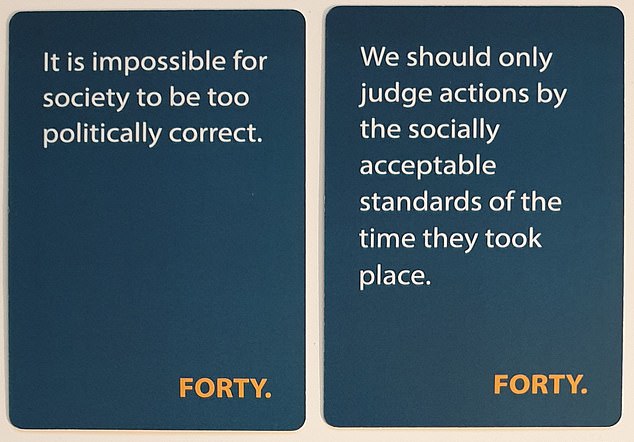 Sparking debate: Forty consists of a deck of 40 cards, each printed with a prompt intended to spark meaningful, if challenging, discussions between people. Pictured, examples of the cards

Examples of cards include, ‘it is impossible for society to be too politically correct’, ‘pay should always be equal among genders in sports’ and ‘confessing adultery is inherently selfish’.

Kenzo, a venture capitalist lawyer, told how he and Georgia, who is studying for an MSc in Infancy and Early Childhood Development at UCL, came up with the idea after realising how much they enjoyed their own far-reaching conversations.

‘The idea actually came about after a debate we had about Instagram,’ he explained. ‘We were talking about whether your behaviour should change after you get into a relationship.

‘We’ve always had conversations about the topics you’ll find in Forty between ourselves, at dinner parties, on road trips or just with friends and family. The jump to actually creating a game happened in October 2019, when we were away with friends.

‘We thought, “people seem to enjoy these conversations as much as we do, let’s put them on a deck of cards and see how we go”. We also just repaid our student loans so starting a side business seemed like it would be more fun than putting everything into savings.’

Kenzo and Georgia designed the entire game themselves, quickly mastering Photoshopto create their own graphics and creating the shortlist of topics they wanted to cover, in order to release Forty in time for Christmas.

Forty, which costs £12.99, has since been bought up by everyone from university lecturers to fiery families looking to set alight under their next dinner table conversation.

Kenzo continued: ‘It was actually quite a challenge to limit the topics we wanted to cover. The cards in our first deck tend to reflect issues that have been in the media (in some shape or form) over the last 18 months or so, balanced against issues we think people would enjoy debating.’ 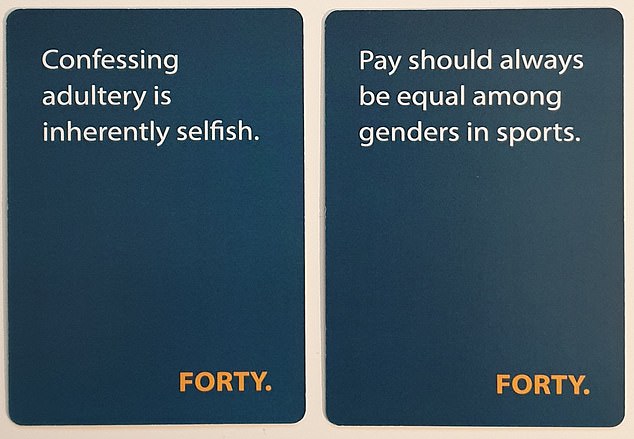 Getting stuck in: Kenzo told how he and Georgia came up with the idea after realising how much they enjoyed their own far-reaching conversations. Pictured, examples of the cards

The couple already have more card ideas up their sleeves for future editions and invite fans of the game to submit their own ideas on the website (https://www.fortycards.com/).

They now have their sights on taking the principle of having constructive yet challenging conversations into different mediums.

Kenzo added: ‘We’ve got a few things lined up. We’re going to be recording and releasing some podcasts later this year where we bring people together to play Forty. Short films and mini documentaries are also on our roadmap.

‘Our plan is to give people the platform to have great debates and we want to cover some of the topics in more depth in the next few months. We’re also hoping to host a few live events where we invite speakers to talk about some of the topics. Keep an eye on our Instagram page for details on how to get involved.’

Forty is available to buy via Amazon or the Forty website.