Home » Lifestyle » Diversity Built Britain 50p coin: how much is it worth?

THE rare Diversity Built Britain 50p coin is one avid collectors are keen to get their hands on.

The coin was only issued last year, so it's a relatively new to the scene of desirable 50ps, but it already has a unique history of its own. 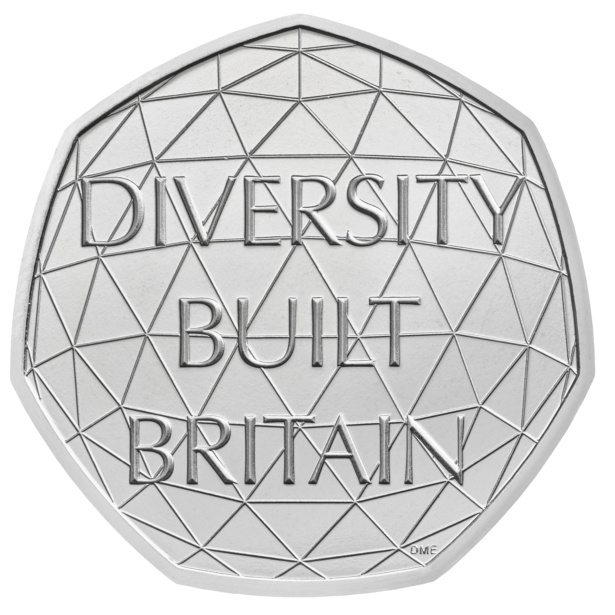 It's the first in a series issued to celebrate diversity in Britain.

The coin was designed by Dominque Evans and features the words “Diversity Built Britain" as well as imagery of connected triangles that are supposed to symbolise the connections between communities across the country.

The Diversity Built Britain coin was released during Black History month in 2020, following a campaign by Banknotes of Colour.

It's because prior to this, no one from the BAME community had been featured on any coins in circulation.

So while the coin still doesn't feature any figure in particular, it is a great nod to the community, and more in the series are due to follow too, so there's even opportunity for collectors to complete a whole set too.

But if you happen to find a copy of the rare coin in your own change for now, here we explain how much it could be worth, as well as how many are actually around.

How rare is the Diversity Built Britain 50p?

There are approximately 10,300,000 of the Diversity Built Britain coins in circulation.

Compared to other coin fan favourites, it's not that rare though.

In fact, it comes in at 59th place in Change Checker's latest scarcity index.

Change Checker says that the mintage figure is quite high for a commemorative coin, so it's good news for collectors as they stand a good chance of finding one in their change.

But as they aren't as rare or in demand you might not be able to sell them on for much profit, so sellers might miss out instead.

The coin beats other new entries to the coin circuit too though, in that same scarcity index.

It's a few spots ahead of entries from the Paddington bear collection, as well as being rarer than the 2016 Team GB 50p and the UK Withdrawal from European Union 50p, to name a few.

How much is the Diversity Built Britain 50p worth?

Captioned "very rare", one copy of the Diversity Built Britain 50p has sold for £350 on eBay, but this was to a lone bidder back in October.

Though another copy that The Sun found had sold for a more realistic £12.50 on eBay, with 14 bids placed in contrast, proving to be a more popular value for the coin.

At the same time, Change Checker values a standard, but certified BU copy of the coin at £4.50.

Usually commemorative coins can fetch a fair amount on auction sites like eBay, so it's not uncommon for sellers to make a good profit from something as low value as a 50p at face value.

But because the coin is relatively new, there aren't all too many listings on eBay currently.

The Royal Mint reveals that one silver proof piedfort version of the coin, of which only 2,500 were minted, is worth as much as £102.50 too.

It's not the only limited edition design kicking around either, as similarly a gold proof piedfort version that's even rarer with only 200 minted, is worth £2,130 according to The Royal Mint too.

These are very unlikely to pop up in your change though, as they are uncirculated coins designed purposefully to be collector's items – but they are ones to look out for if you have to money to spare and want to complete your collection.

Even the consumer experts over at Which? warn though that the value of these commemorative coins isn't guaranteed to increase over time, so from one day to the next you could find the value changes.

Is my change worth anything?

Coins with a low mintage or an error are often deemed the most valuable by collectors, so spot one of these in your change and you could be quids-in.

An easy way to spot one is to look out for unique designs on the change kicking about in your wallet.

Usually the images found on the obverse will have been created to commemorate an event or location, along with a period of time in history.

There is a whole collection of rare Olympic 50p coins for example that can fetch a pretty penny on eBay, you might find some of these crop up in your change since their introduction after the London 2012 games.

But it's not only that, rare error coins are just as popular with collectors.

You can check how much the coin is selling for on eBay, by searching the full name of the coin, select the "sold" listing and then toggle the search to "highest value".

That way you get an idea of the value of a coin but sometimes a coin may not have sold for the amount is was listed for.

You can also get your change verified by The Royal Mint if you think it may be worth something, that'll also help reassure buyers that they're paying for the real deal – and you may even be able to hike up the price a bit if you go to sell.

You'll also find that online tools from change experts like Coin Hunter are helpful to see how much it could be worth.

But you should always be wary of fakes circulating online, these won't be worth as much in value so you could end up cashing out on the wrong thing or disappointed that your change isn't worth as much as you thought.

Rare coins and valuable notes – is yours worth a mint?

Do you have a story for The Sun Money team?

The Ultimate Guide For Snacking Your Way Through Disneyland