For Mia Dyson, Liz Stringer and Jen Cloher, the three Australian songwriters that make up the supergroup Dyson Stringer Cloher, it’s important to look to the past while paving the way for the future. Falling Joys, the fist-pumping, harmony-soaked anthem from their self-titled debut album, celebrates the underappreciated brilliance of the women who came before them. The track pays tribute to the female-fronted ’90s rock outfits Falling Joys and the Clouds with lyrics such as “You  kicked the door wide open, so I could walk onto that stage”. 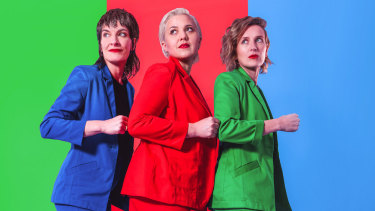 Dyson can clearly see the impact trailblazing women have had in making it easier for future generations to carve out a musical career. “All three of us have experienced younger women letting us know that we’ve inspired them to pick up an instrument or start writing,” she says. “That’s what’s lovely about celebrating the women who’ve gone before us who maybe didn’t get the recognition. We owe our gratitude to the women who’ve come before.”

While the three close friends already all had their own successful solo careers, they decided to come together as Dyson Stringer Cloher in 2013 to record an EP and tour regionally. However, with Dyson in Los Angeles, Stringer in Toronto and Cloher in Melbourne, it wasn’t until last year their schedules aligned so they could release their debut album. After a successful tour last year backed by a band, tonight they return as a trio to perform a special gig at The Vanguard. “I’m a big rock ’n’ roller at heart and I love loud, but I’ve really come to appreciate when we strip it back to just the three of us,” says Dyson. “It’s super intimate and vulnerable.”